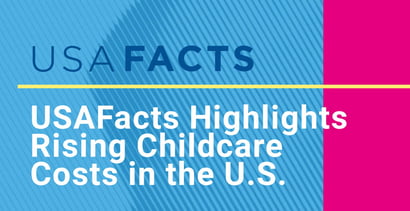 In a Nutshell: Middle-to-low income families are being priced out of child care. Child care is deemed affordable if it costs no more than 7% of a family’s income, according to the Department of Health and Human Services. But with rising child care costs, that means families would need to be making more than $75,000 a year to afford adequate care. USAFacts compiled data from 2010 to 2020 that shows how much families are spending on child care and analyzes the impact of those trends on the economy.

Fake news is one of the biggest issues Americans face. The term first popped up during the 2016 presidential election to describe an influx of fake articles shared on social media to influence the election.

More recently, the issue has popped up with news on the coronavirus. Misinformation was being spread at a rapid rate across the internet, creating uncertainty and distrust in the science and medical communities.

Americans need to know where they can get unbiased, straight facts on issues important to them. One poll found that two-thirds of all Americans believe fake news causes a great deal of confusion.

USAFacts looks to be that resource. The company scours government documents and publicly available information at all levels, including local, state, and federal. Its data gatherers publish the information they find in easy-to-digest articles. USAFacts’ mission is to empower Americans with the facts and show where their tax dollars are going.

In one of its most recent reports, USAFacts looked into and compiled the data on how much families are spending on child care. It turns out, they are spending a lot. And the cost of child care has continually gone up throughout the 2010s, peaking in 2020.

In 2010, the average cost of child care was $6,287 a year. Ten years later, it jumped 28% to $8,103. Child care costs averaged $7,131 a year in 2020per family thanks to pandemic-related federal assistance and the fact that many parents began working from home. But with that assistance running out and workers heading back to the office, it’s difficult to say what the future cost of child care will look like.

USAFacts works continuously to find all of the relevant data in can for every state, but it’s not easy. Every state and every local government has a different system for documenting child care, creating real problems in finding out the biggest issues Americans face. Information collection is one of the biggest obstacles for USAFacts, despite the information supposedly being public.

“We spent a while looking for what data was out there at federal, state, and local levels and merging them together,” Chief Product Officer of USAFacts Richard Coffin said. “It’s crazy that it took us so many years to do it. This is taxpayers data. They’ve paid for this. So we took it upon ourselves to make it easy for the American public to access and use the data.”

Unsurprisingly, low-income families are the ones hit hardest by rising child care costs. The pandemic made that an even more challenging issue to tackle. Parents who need to leave home for work to support their family had to make plans for someone to watch their child as schools closed and children attended virtual classes from home.

Low-income families who barely scrape by as it is had more thrown on their plate, like how they were going to pay for child care. Remember, the Department of Health and Human Services said spending more than 7% of a family’s income on child care is unaffordable. All families who made less than $75,000 a year (about 43% of all families with children in America) were spending more than 7%.

“Families that are Black, American Indian and multiracial typically pay more in child care,” USAFacts Data Analyst Sara Chernikoff said. “In general, a big portion of minority populations are paying more than 7% of their income towards child care costs, and it’s not affordable or sustainable in the long run.”

Parents also had to worry about where their child was receiving care. Quality child care is hard to find and even more unaffordable. And the pandemic made this issue even worse.

Nearly 16,000 child care providers shut their doors for good during the pandemic. Unreliable attendance, increased operating costs, and razor-thin margins caused many of those providers to go out of business. The closures represented a 9% decrease in child care and day care centers across the nation.

USAFacts’ limitations on data gathering lie with the many governments in the U.S. With more than 90,000 governments across the country and one federal government, it is difficult to pull in the data to get a comprehensive picture of child care costs when every government collects the data differently.

The company told us the government does not collect nor make available a lot of data on child care. That left USAFacts to aggregate and put together all of the information itself.

In looking through the data on child care, USAFacts found a high number of women had left the workforce, with a high percentage of them citing family reasons that might include a death in the family, pregnancy, or rising child care costs.

Some parents say at a certain point, child care costs reach a level where it doesn’t make sense for a parent to continue working if everything they make goes into paying for child care. And with more of the workforce heading back to the office, the shortage of child care can prove to be an issue far after the pandemic.

USAFacts said the federal government needs to play its part in pulling together the relevant information to see trends in child care costs.

“Each government has a different data collection system and child care is very much a local thing,” Coffin said. “The federal government is the only one who can talk to states and figure that out. I think that would be a huge benefit to us.”

Although information is limited, there are ways to open up access to child care. Florida, Oklahoma, Vermont, and Washington, D.C. all offer universal pre-K to the public. Another nine states have universal pre-K policies that are open to all families regardless of income. States that offer programs like these end up serving a significant portion of 4-year-olds.

Cracks in the system can be found as more data is collected, which can help bring costs down. But data collection is a challenge. Especially with the end of pandemic-related assistance like the expanded child tax credit, the cost of child care is an issue that needs to be addressed. Taxpayers received an increased child tax credit of nearly $4,400, with families in the lowest 20% of income receiving the largest benefit.

Legislation has been proposed but has not made progress through Congress. With more information available and people learning about the high cost of child care, it could be enough to convince lawmakers to take action before it’s too late.

“When we say we wish the government had better data, they should also want to answer this question,” Coffin said. “This question should be asked and answered a million times over. We think it could be found, but we haven’t been able to find it yet.”

60% of Americans Don’t Have a Personal Finance Budget