Do Medical Bills Affect Your Credit Score? Consumer Credit Research Shows They Do — But That May be Changing 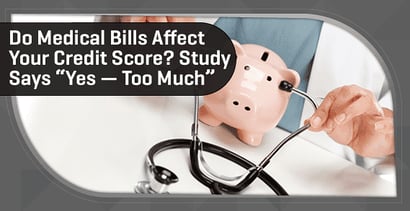 Your credit score is a reflection of the age, type, size, and general standing of the myriad accounts that make up your credit report. Maintaining and updating those reports is the general purview of the three major nationwide consumer reporting agencies (NCRA), also known as credit bureaus, Equifax, Experian, and TransUnion. Unless something, such as a medical bill, is reported to one of these agencies, it won’t be a part of your credit report, and won’t affect your credit score.

However, when your medical bills get out of hand, become delinquent while you dispute an insurance claim, or otherwise go unpaid, they can end up in the hands of a collections agency. In an attempt to encourage you to pay those bills, the collections agencies will often report your delinquent account to one or more NRCA, resulting in a collections tradeline on your report and a corresponding decrease in your credit score.

Nearly 20% of Consumers Have Medical Debt in Collections

If you’re feeling overwhelmed by delinquent debt, you’re certainly not alone. In a study published by the Consumer Financial Protection Bureau (CFPB), Consumer credit reports: A study of medical and non-medical collections, researchers determined that, “In our sample of credit reports from one NCRA, collections tradelines appear on the credit reports of almost one-third (31.6 percent) of consumers.”

Across the nearly 220 million consumers with credit reports, that one-third represents around 73 million people whose credit scores have been impacted by a collections tradeline. What’s more, the study also found that more than half — a whopping 52% — of all the collections tradelines were from medical debts.

“Nearly one in five consumers (19.5%) has a credit report containing one or more collections tradelines that originated with a medical provider. Among [those] consumers who have medical collections tradelines, the median consumer has two such tradelines.” So, why do so many Americans seem to have difficulty paying their medical bills? According to the report, the system may be as much — if not more — to blame as the consumer.

This chart from the CFPB report shows almost one-fifth of consumers have collections tradelines due to delinquent medical bills.

“Lack of price transparency, and the complex system of insurance coverage and cost sharing, means many consumers — including those who have health coverage — receive medical bills that are a source of confusion. As a result, they can incur medical debts in collections without certainty about what they owe, to whom, when, or for what. This uncertainty could affect any consumer, regardless of their financial condition.”

Additionally, the report found that, even had consumers disputed or otherwise taken care of some of these delinquent accounts, credit reports were rarely updated.

“Industry guidelines for reporting to the NCRAs instruct furnishers to update information on all accounts every month. We observed that, while most lenders furnishing data on active tradelines observe this reporting standard, most collectors furnishing collections tradelines do not. During a six-month period from December 2013 to June 2014, only a small fraction of medical, utilities, and telecom collections tradelines were updated on a regular monthly basis. The majority were never updated during this time period.”

Medical Debt Can Be a Poor Indicator of Consumer Risk

In the end, the report determined that the occurrence of collections tradelines, particularly those originating from medical services providers, were, indeed, a poor indicator of a consumer’s circumstances and overall creditworthiness.

This chart shows the worst non-collections delinquency on the credit reports of consumers whose only collections tradelines are from medical services providers. The chart indicates these consumers are actually very likely to have an otherwise “clean” — no accounts more than 30 days delinquent — credit report.

As a result, it said, credit score models often underestimate the creditworthiness of those with collections tradelines from medical services providers. “Consumers with medical debt were more likely to pay their future loan obligations on par with consumers scoring at least ten points higher. In cases where the consumer’s medical debt was paid off, the scores underestimated the consumer’s creditworthiness by an average of 22 points.”

The final recommendation of the study included rules or industry best practices to standardize billing policies as a way to limit consumer confusion and unknown delinquencies. It also suggested an improved credit score model to better reflect consumer creditworthiness. “Credit scoring models that differentiate medical collections from other collections are likely to more accurately reflect the actual creditworthiness of consumers.”

One such model referenced in the study is the most recent FICO 9 score. Unlike other scoring models, including previous FICO versions, the FICO 9 score actively differentiates between medical and non-medical collections tradelines. In addition, the new scoring model will no longer count paid collections as negative accounts and will take positive rental history into consideration when determining scores. While most lenders have been slow to adopt the new model, and mortgage lenders are unlikely to ever do so, FICO 9 is a good step toward an accurate, modern model.