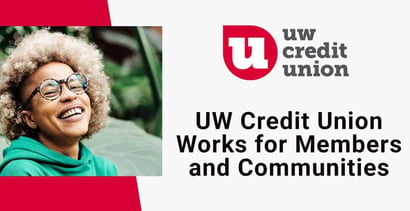 In a Nutshell: In the college town of Madison, Wisconsin, UW Credit Union builds on its legacy of community commitment stretching back to the Great Depression. Credit building products, financial education initiatives, volunteerism, and philanthropy are all part of the credit union’s successful history. UW Credit Union has around 320,000 members across Wisconsin and the U.S. and stands as an example of the positive impact of the credit union mission.

Madison, Wisconsin, is home to the University of Wisconsin and is known as one of the most welcoming cities in the US. At the forefront of Madison’s commitment to students, workers, and businesses is UW Credit Union (UWCU), which has embodied the credit union philosophy of people helping people since its founding during the Great Depression.

A handful of university professors and campus leaders founded UWCU to help people of modest means gain access to credit. In the late 1980s, the credit union expanded from its Madison campus to other state system campuses. And starting in the late 1990s, it began expanding to nonuniversity system communities throughout Wisconsin.

Today, UWCU is one of the largest credit unions in the state with more than $5 billion in assets, 320,000 members, and 30 branch locations. The credit union is also a financial services market leader in a variety of product categories, including checking accounts, mortgages, auto loans, student loans, and credit cards.

Anyone living, working, or studying within five miles of a UWCU branch qualifies for UWCU membership. Membership also extends to anyone who has attended a Wisconsin college or university. So UWCU now claims members in all 50 states and dozens of countries.

In addition to providing products and services that meet the financial needs and aspirations of members, UWCU distinguishes itself for its commitment to financial education and volunteerism in the community. In addition, the credit union has an internal tech team that handles all digital development to serve its wide membership base.

“We have to be on top of our online banking services and digital presence to ensure we serve all of those people well,” said Chad LaFlash, UWCU’s AVP of Research and Product Strategy. “Plus, we have really strong membership retention.”

Dedicated to Financial Improvement for All Members

UWCU has a wealth of experience serving college students thanks to its close ties with the Wisconsin state university system. Many young people have little to no experience with banking services and need to start from scratch to establish credit.

UWCU’s credit card products have no annual fees and offer various rewards options. Cards are designed to fit any lifestyle, even that of a first-year student. UWCU also provides student loans.

“We have a long history of offering small-dollar credit card limits and protective features,” LaFLash said. “For example, we’re not going to ask you to pay so little each month that you’re never going to pay it off.”

Involvement with the university community also pays off for members who need to build or rebuild credit. UWCU provides small-dollar credit lines for those who may have had bad experiences with credit or want to ensure they don’t overextend themselves.

“We offer secured credit options for people who’ve had negative experiences and need to reestablish their credit,” LaFlash said.

UWCU also offers credit score and credit report data to its members. When members need to know where they stand, they can access that valuable information at any time for free.

“Our members want high-tech digital service experiences,” LaFlash said. “Our in-house programming expertise enables us to be nimble and attentive to member needs in that regard.”

“We are very liberal with that,” LaFlash said. “The line often doesn’t start very big, but it provides that cushion and that opportunity to avoid shortfalls and cash flow management concerns.”

UWCU also offers a payday advance option that’s an alternative to expensive payday lenders. Members with direct deposit who have an emergency need can receive a $500 injection and pay it back over three months.

The progressive side of UWCU’s service approach also manifests through its commitment to community service. A full-time financial inclusion and educational outreach team trains front-line branch staff to become financial mentors. They, in turn, are deployed into communities to provide instruction.

A significant part of that commitment is in-person and webinar-based financial education. Topics include budgeting, credit responsibility, homebuying, and retirement and estate planning. The credit union reaches out to high schools, colleges, and the broader community.

“We take our education efforts on the road to the places people are already meeting,” LaFlash said. “If we can avoid the problems of childcare and transportation because folks are already in a particular place for another event, we’ll partner with organizations to provide education at that moment.”

Financial education through UWCU is always free, and sessions avoid overt sales orientation. Bilingual team members reach out to Spanish-speaking users, and instructors always try to speak to specialized community groups in terms they can understand and relate to.

“It’s not an effort to sign more people up for our services,” LaFlash said. “It’s like a conversation tailored to the people we’re talking with.”

UWCU team members provide in-person information and financial literacy support to Operation Fresh Start clients. The organization also benefits from UWCU volunteer efforts. UWCU employees can use up to 16 hours of paid volunteer time per year, so there’s plenty of that to go around. UWCU also offers scholarships, in-kind donations, and grant funding.

“We even have people who serve on nonprofit boards to help organizations maximize their efforts,” LaFlash said.

LaFlash serves on several boards, including the board of Community Shares of Wisconsin, an umbrella organization focused on supporting community advocacy groups.

“They’re looking to change systemic problems,” LaFlash said. “I’ve been part of that group for 20 years now — I love the focus they have and appreciate that UWCU supports my involvement.”

In 2021, UWCU employees donated $380,000 of their own money —  which the credit union matched — to charities. That year, UWCU also spearheaded a racial equity fund that generated $2 million for 50 nonprofits in the Madison and Milwaukee areas.

In 2021, LaFlash said he also saw evidence that community members truly appreciate UWCU’s efforts to keep fees low. Soon after the credit union lowered its non-sufficient funds fee from $30 to $5, the team marched at a pride event in Milwaukee.

As LaFlash walked the parade route, a community member nearby suddenly yelled out, “Yay $5 overdraft — that’s my credit union!”

“So there’s proof that what we do makes a difference in people’s lives,” he said. “It was a great example of what brings me back to work every day.”