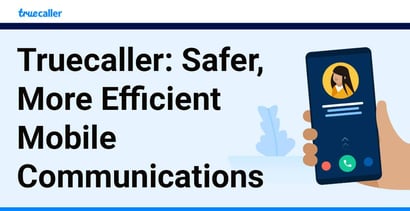 In a Nutshell: When mobile devices began to overtake landlines for making calls in the early 2000s, users discovered that the caller ID protections they relied on no longer worked. And spammers realized they had a lucrative new market to exploit. Truecaller quickly became the go-to caller ID and spam-blocking tool worldwide. Today, Truecaller helps more than 330 million global active users contextualize calls and text messages and stay ahead of scammers. With Truecaller Assistant activated, subscribers can screen inbound calls with AI interactions to filter out malicious actors, and pick up the calls that matter.

In today’s era of mobile-first communication, spam calls often outnumber the legitimate but unidentified calls that most people receive — so much so that the default move for many people is to ignore calls altogether. And because callers know the recipient is unlikely to pick up, they don’t even bother trying.

That’s a shame because it negates one of the key use cases that make cellphones a better choice than landlines. Users pay a lot for their devices and service plans but can’t use them as intended — even though a seemingly old-fashioned phone conversation can still be the best, most efficient way to exchange information.

SMS text messages may also pose a threat because spammers are always looking for creative new ways to exploit the vulnerable. The bottom line is that, in today’s environment, calls and texts from friends, family members, and businesses get lost in a sea of spam.

Secure, privacy-focused Truecaller has identified and blocked hundreds of billions of spam calls since its inception. And with Truecaller Assistant, an added subscription feature, Truecaller uses artificial intelligence and machine learning to answer calls automatically, detect spam, and oversee interactions with callers.

“The regulators have done a decent job of protecting us, but even if, say, you’re on the Do Not Call list, you’re still under attack from fraudsters,” said Clayton LiaBraaten, Senior Executive Advisor at Truecaller. “Our mission is to ensure people can answer their phones again.”

Caller ID, Spam Blocking Based on AI and User Feedback

Truecaller is the number-one trusted caller ID app on the market. It’s free, and easy to download and install to begin safeguarding essential communications. After the user gets up and running through an intuitive setup process, the app does all the work.

The original problem Truecaller sought to solve was the lack of mobile caller ID. Carriers were lagging in providing that service, so the Truecaller team began assembling a phone number database, continually enhancing it via user-generated feedback.

The initial focus was to identify business numbers because those were the calls users were most likely to receive. User input helped Truecaller also begin to identify telemarketers and spam callers.

“That’s how we became more than just a contact management and caller ID app and evolved into a caller ID and spam blocking app,” LiaBraaten said. “Robocall and robotext campaigns are increasingly sophisticated, perpetrated by criminals who are highly evolved technologists and social engineers. Our vigilant community works like a neighborhood watch to stop the scammers in their tracks.”

As the user ecosystem grew into the massive network it is today, Truecaller began to glean deep insights from billions of daily calls. Artificial intelligence and machine learning help Truecaller analyze network traffic and block spammers.

“If we see a block of numbers that suddenly fires off tens of thousands of calls that last two seconds or go unanswered, from a machine learning perspective, that’s a pretty good indicator those are bogus calls,” LiaBraaten said.

Truecaller then added the ability to automatically flag and filter text messages. Its Smart SMS feature routes text spam to a secondary inbox and categorizes legitimate texts as Personal, Important, or Business. The Truecaller community helps by identifying suspicious links.

Truecaller Assistant, a premium feature in the app, takes the commitment to automation a giant step further by looking at the context of each call, characterizing every utterance from the caller, whether live or robotic, as a trigger for engaging with that communication. All the while preserving the “privacy by design” principles.

Call screening through the Truecaller Assistant puts the flexibility of a human executive assistant in the subscriber’s hands.

“We believe caller ID and spam blocking are table stakes, features that should be free for everybody to download,” LiaBraaten said. “With the Assistant, we keep the bad guys out, but we also bring you the calls that matter, even when they’re not in your contacts.”

To drive engagement without putting the subscriber on the spot to answer the phone live, Truecaller Assistant uses real-time speech-to-text to provide “live transcription” and enable the call recipient to engage by text requests for additional information or even intercept the call if important and available.

Building the Truecaller Assistant was particularly challenging on the iPhone because Apple doesn’t allow third-party developers to see incoming calls and texts. Considerable engineering went into creating a service that works as well on the iPhone as it does on Android.

In addition to enabling unlimited text requests for phone numbers and other contact details, Truecaller Assistant allows subscribers to select a voice from several different options. They may also receive notifications when callers view their profile in the app and view other profiles anonymously.

Truecaller: Use Your Phone the Way It Was Intended

Truecaller’s dual reliance on automation and user feedback, combined with its Assistant-enabled convenience features, creates an integrated mobile communications hub that puts users in the mobile communications driver’s seat. Features that go far beyond caller ID — features that landline users would never have imagined possible — are easily within the Truecaller subscriber’s capabilities.

And that means a return of the phone app to its rightful place. Emojis and other chat features may approximate the emotions of live human conversations, but there’s no substitute for the real thing.

“There are so many positive use cases for inbound communications that shouldn’t be over-filtered simply because the number is not in the receiver’s contacts,” LiaBraaten said. “But the services you use and the people you know casually or professionally are not always in your phone book — think your local auto repair shop, home services, kids’ teams, parent groups, etc.”

For example, a call from a pharmacist might be routine, but it also may be an attempt to communicate an issue needing immediate attention. Truecaller helps the user understand the urgency and handle the problem promptly.

More mundanely, calls from everyday service providers using their personal devices may not be identifiable as business-related. Truecaller makes handling those routine conversations much more efficient. No one likes the back and forth of text after text when a simple discussion works much better.

But spammers aren’t going away. They’re digging deeper into human psychology to invent evermore nefarious ways to part people from their money and identities.

On the horizon for Truecaller are natural Assistant conversational features that promise to further blur the lines between artificial intelligence and live human assistance.

“The core features of the app are free and will always remain so,” LiaBraaten said. “But we’re constantly looking at what’s happening with consumers, and the fraudsters, to stay ahead of the curve.”