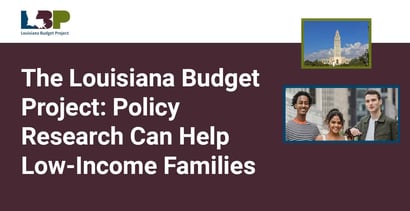 In a Nutshell: The Louisiana Budget Project is a nonprofit organization that conducts research and identifies possible solutions to financial challenges low-income families face. The organization analyzes public policies and laws to help Louisiana residents understand how the state budget impacts them. Through its advocacy efforts, the Louisiana Budget Project works to pass legislation that expands financial resources to low-income families. Its efforts include successfully advocating against a bill that would expand predatory lending practices, educating the community about available financial resources, and sponsoring welfare programs in Louisiana.

The COVID-19 pandemic has undoubtedly had an effect on the daily finances of millions of Americans. Families across the country experience rising bills and housing costs amid fears of a recession.

A 2022 study revealed that 61% of Americans live paycheck to paycheck, which is up 6% from 2021. And many families who cannot pay their bills on time may turn to the only lending options available to them — loans with exorbitant interest rates of 700% or higher.

Seventeen states have effectively banned predatory loans by capping their interest rates. But, several states in the South have few restrictions on predatory loans.

One of those states is Louisiana, which has one of the nation’s highest concentrations of payday lenders with 936 outlets.

Earlier this year, Louisiana state lawmakers considered Senate Bill 381 that would expand predatory loans by allowing payday lenders to offer more products with higher fees. That’s when the Louisiana Budget Project, a nonprofit organization, did its part to help educate the public and lawmakers on the repercussions of passing the bill.

The Louisiana Budget Project is a think tank that researches the effect of public policy on the state’s middle- to low-income families. The organization advocates against bills that serve corporate interests at the expense of Louisianans, while supporting bills that help boost the financial security of families.

“I like to say that we’re a do-tank, not just a think tank,” said Davante Lewis, Louisiana Budget Project Director of Public Affairs and Outreach. “Let’s preach the dangers of predatory lending, but build a campaign and apparatus to get people involved in the fight to stop expansion of predatory lending in the state of Louisiana.”

The Louisiana Budget Project worked with the Center for Responsible Lending to ensure it adequately assessed SB 381 and the implications of the countless fees and high interest rates it would produce.

Despite the lending industry hiring more than 50 lobbyists to pass the bill, Louisiana’s governor vetoed the bill once it hit his desk. And because the bill passed the House and Senate by a few votes, lawmakers could not overturn the veto.

“With all of the hard work we put in from day one, the governor vetoed the bill,” said Lewis. “And lawmakers did not attempt to override the veto because it did not have adequate support.”

Tracking every single bill that makes it through the legislative process is a near impossible task for constituents. Every year, state lawmakers in Louisiana vote on dozens of bills.

Think tanks like the Louisiana Budget Project make it their job to go through the bills to ensure they have Louisianans’ best interests in mind. The organization said it examines laws and budgets from the point of view of middle- to low-income families to see where Louisiana is investing.

“We are looking to do three things,” Lewis said. “We’re looking to eradicate poverty, promote racial justice, and ensure that everyone in Louisiana can prosper.”

The Louisiana Budget Project is nonpartisan with support from Republican and Democratic activists.

Each district has a background sheet from the LBP that shows how many people in the district receive aid from governmental programs. The organization then looks at the educational attainment rates together with demographics from the district to understand the needs of the community.

Educating communities on public speaking is an essential part of the Louisiana Budget Project’s mission. Its most popular presentation is on budget basics within public policies.

The organization said it wants people to have the information to go to their lawmaker and discuss their concerns.

“We don’t just do the research, we also make sure that we are informing people in a very proactive way,” Lewis said. “The community can learn the information and become a better advocate not just for us, but for themselves as well.”

Advocating for Legislation to Help Louisianans

The Louisiana Budget Project’s research leads it to create solutions to the problems low-income families in the state face.

Instead of supporting SB 381 that could potentially put families into a cycle of debt, the think tank suggested a bill to cap interest rates at 36%. There is currently no cap, and it is not uncommon to find payday loans with APRs higher than 700%.

The organization works to raise the minimum wages and expand Medicaid. LBP has already asked lawmakers to file bills on those issues.

Bills lawmakers file without input from the Louisiana Budget Project are still subject to scrutiny from the organization. LBP recently researched and supported bills creating a universal basic income and expanding baby bonds.

While the nonprofit does not work in auto insurance, LBP supported legislation to ban auto insurance companies from using credit checks as a way of setting rates. Many Louisians live in poverty, and the organization said the bill could negatively affect the community.

United Way, one of the Louisiana Budget Project’s partners, helps the think tank plan events and webinars to raise awareness of its research. The research leads community members to join LBP in advocacy efforts, such as going directly to the capital and supporting specific bills.

The organization said it wants to showcase that more needs to be done to protect consumers, especially in tough financial times.

Payday lenders help people pay their bills in the short term. But over the long term, borrowers can not afford to pay back the fees and interest payday loans accrue. This destroys credit and limits the financial resources people have access to.

The Louisiana Budget Project said credit unions are one of its strongest partners. While credit unions are not as widespread as payday lenders, they offer alternatives to predatory loans and help keep people from falling into a cycle of debt.

The organization also advocates for strengthening community centers to provide economic tools and lessons. The centers would educate people on the advantages of credit unions, including lower interest rates, more protections, and products that help build credit.

“We found that partnership to be so great and so responsive because it’s not only about stopping predatory things, but it’s also about building up people to be financially secure themselves,” Lewis said.

The think tank routinely conducts research on bills and solutions to issues Louisianans face every day. One topic it regularly looks into is income support, including increasing the federal minimum wage, earned income tax credit, and the child tax credit. Some states, including Louisiana, do not even have a set minimum wage.

The LBP is also working to codify pandemic-related financial protections, especially provisions that prevent states from dropping people from Medicaid programs, before they expire. The organization also wants to ensure people have food through SNAP benefits.

The Louisiana Budget Project is beginning to branch out into other areas, including climate work and addressing how the environment impacts poverty. The think tank is also highlighting how racism factors into public policy and how some economic and housing policies are directly tied to racism.

“We’ve been very big on ensuring that racial equity and racial justice is a component of our work,” Lewis said. “So, if we are not talking about racism and policy, we’re not actually talking about policies.”

Swash Users Can Monetize Data to Pay Down Debt