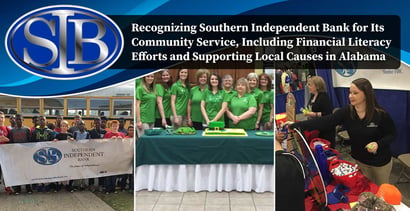 In a Nutshell: While many banks have been fixtures in their communities for decades, Southern Independent Bank launched in 2006, serving Covington County, Alabama. Founded on the principle of community involvement and offering personalized, high-quality service, the bank now has $240 million in assets. The bank promotes financial literacy to local schools, colleges, and the community-at-large. Southern Independent Bank is also an avid supporter of schools and other local organizations through sponsorships and volunteer efforts by staff. Because of these efforts, we are recognizing Southern Independent Bank with our Editor’s Choice™ Award for Community Commitment.

Most of the biggest names in banking, as well as many community banks, have been in business for at least 50 years. Today, many of them stand on reputations they have built on their commercial prowess and longevity.

But in 2006, Southern Independent Bank opened its doors for the first time to the communities of Opp and Andalusia, both located in rural Covington County, Alabama.

“I think we have a pretty cool story,” said Brett Ballard, Southern Independent Bank’s Senior Vice President and Opp Branch Manager. “I was working at a big bank, and I started to really see that the big banks were not servicing the rural areas.”

Ballard, along with 12 board members — six from Opp and six from Andalusia — put their heads together to come up with the founding principles of Southern Independent Bank. Next, they hired a team of experienced and locally known bankers to lead the institution’s charge. The team consisted of Guy H. “Buddy” Wilkes as CEO, Micah Garner as the Senior Lending Officer, and John Adams as the CFO.

Wilkes has since retired, Garner is now the CEO, and Jessie Self is now the Senior Lending Officer of Southern Independent Bank.

“I’ve still got the minutes from that first meeting in March of 2005,” Ballard said. “Since we opened in December 2006 in Opp and Andalusia, we have grown to a $240 million bank. And in June of this year, we opened a new branch in Florala, which is also in Covington County.”

Southern Independent Bank was literally founded on the principles of delivering high-quality, personal service to its communities. And over the years, the bank has held true to that principle, supporting Opp, Andalusia, and now Florala in numerous ways, from volunteering to delivering financial education.

That’s why we are recognizing Southern Independent Bank with our Editor’s Choice™ Award for Community Commitment.

How Southern Independent Bank Embodies the Spirit of a Community Bank

In its very first press release announcing the opening of Southern Independent Bank, the organization stated it was “committed to the principles of true community banking and the abilities of an independent bank to better serve individuals and business owners throughout the area.”

“We went out and raised the money to start this bank. We had 433 investors when we opened, and 85% of those investors were from Covington County,” he said. “Southern Independent Bank is truly a community bank. I don’t know how you could be more of a community bank than we are.”

Ballard said from the day the bank opened, it wanted to be a big part of the community and community activities.

“The personnel we’ve hired over the years have all been community-minded people,” he said. “And it goes from the entry-level employee all the way to Micah (Garner), the CEO.”

The bank espouses its community-minded approach on its website as well.

“We have embraced the finest traditions of community banking to provide a full array of accounts, loans and financial services; and pledge to deliver each with impeccable service reflecting our commitment to you,” according to the website. “The Power of Independence is reflected in the efforts of our directors, management, and staff, and we look forward to exceeding your expectations of what a bank can be.”

Financial Education Resources for All Ages, From Students to Senior Citizens

“We spend a lot of time on youth. We believe it’s not just a Covington County issue, it’s a national issue on saving,” Garner said. “We try to start fostering that as early as possible. We communicate a lot with high school juniors and seniors as they’re preparing to open their first checking accounts.”

He said Southern Independent Bank spends a lot of time with that audience to teach them things like how to budget, how to avoid overdraft fees, and generally how to manage their bank accounts with ease.

“Savings is a focal point of our advertising and marketing efforts,” Garner said. “We try to stay as active as we can in our school systems. This might be a little cliché but it’s not just promoting a product, it’s just who we are.”

The bank believes it’s extremely important to stay engaged with the Covington County youth, Ballard said. This also includes helping them open savings accounts and providing incentives such as contributing money to the accounts.

Ballard said Southern Independent Bank also delivers financial literacy lessons to local colleges and has classes for adults on how to repair credit. Other issues the bank addresses include cybersecurity concerns such as how to protect your identity online.

“Whether it’s teaching at one of the schools or through social media, we try to put out as many resources as we can find, by the FDIC or any other groups out there that that put out identity theft protection articles,” Ballard said.

Ballard said he is continuously amazed at the level of community engagement he sees from Southern Independent Bank employees.

“So many employees come to me and say, ‘Hey, this event’s coming up in a month or two and we want to do this or we want to do that for it,’” he said. “We’re so blessed to have a staff that looks for ways to be out front in the community. We just have a lot of givers.”

Ballard explained that with Opp and Andalusia being small towns, they have a lot of small-town activities, like parades and festivals, that Southern Independent Bank often sponsors in one way or another.

“Then there’s the school system,” he said. “Probably 50% of our marketing budget, which I would think is very large for a bank our size, is spent predominantly on sponsorships and promotional stuff, and a significant portion of that goes to the schools.”

Nearly all of Southern Independent Bank’s employees graduated from one of the high schools in Covington County, Ballard said.

“So, we’re at every pep rally, every annual event, and, for so many things, we end up being a big part of what they do,” he said. “Also, we’ve had a lot of (football) stadium renovations in Opp and Andalusia over the last few years that we’ve been heavily involved in. So we go from programs at schools to helping them with the facilities.”

Southern Independent Bank has also been a sponsor of the annual Jeremiah Castille Character Football Camp, spearheaded by the former University of Alabama football player.

Nearly 13 years since a group of bankers realized their dream of opening a bank that was truly dedicated to the community, Southern Independent Bank is still showing its dedication in many ways.

And a quote by Ballard from that very first press release still rings true today: “There is a difference to be found at Southern Independent Bank. It’s about service and a can-do attitude we believe most of our customers will find refreshing.”