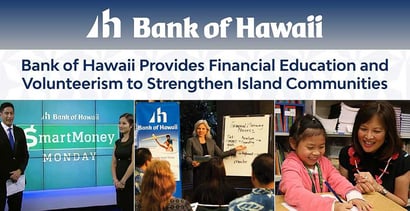 In a Nutshell: Island life is a little different from life on the mainland, and no institution understands that better than Bank of Hawaii, which was founded in 1897 when the state was a republic. Its commitment to financial education and its communities at large has made it one of the most respected and trusted banks in the United States, and has earned it recognition from Forbes magazine and the American Bankers Association. The bank holds seminars and group discussions for community members and has developed school programs that bring financial literacy into the classroom. And its community service through the Live Kokua campaign raises money for nonprofits while encouraging volunteerism for projects.

Hawaii is one of the most popular tourist destinations in the world, but most people know that. What you may not know about the state is that it’s the widest in the US when measured from east to west points. It’s also the most isolated population center in the world, at 2,400 miles from California and 3,850 miles from Japan.

But no matter how much people know about the state, they can’t fully understand it until they’ve been there. Vacationers and recent arrivals are often caught off guard by the laid-back attitude of Hawaii residents. Whether it can be attributed to living on “island time” or just being surrounded by the ever-present beauty of paradise, residents of Hawaii seem to stress out less than their counterparts on the mainland.

A Gallup study ranked Hawaii as the location with the highest level of well-being of all 50 states. The so-called Happiness Index looked at things like physical and emotional health, access to quality health care, satisfaction with work, and even a sense of belonging to a community.

Bank of Hawaii’s Momi Akimseu said that the institution is driven to support communities.

The study found Hawaii residents were happier than people in any other state. But the financial stress of living in an expensive state like Hawaii can leave people feeling anything but calm and collected — especially if they aren’t well-versed in money management.

Luckily, that sense of well-being and community involvement also extends to many of Hawaii’s businesses — including financial institutions. Bank of Hawaii has been serving island residents since 1897 and was chartered and incorporated when Hawaii was still a republic. More people entrust their finances to Bank of Hawaii than to any other bank on the islands.

“We’re very proud of our long-standing presence and relevance in the community. We’re also proud to say that we’re one of the leaders in the community and a very large employer. We’re in virtually every city and municipality on each island, and in the western Pacific,” said Momi Akimseu, Vice President, Community and Employee Engagement at Bank of Hawaii.

While the bank specializes in ensuring Hawaii residents have access to the financial products they need to build financial wellness, the bank’s steadfast commitment to supporting and giving back to the communities it serves through education service is another key differentiator.

Hawaii is a chain of islands, each with varying levels of resources. Many of the communities Bank of Hawaii serves are rural and lack access to the financial education resources available in more developed regions. The bank recognizes this need and works to bring financial literacy to previously underserved areas.

“In 2009, following the financial crisis, the bank saw an opportunity to help educate and empower our community, relative to personal finance and financial literacy. That was when we launched the Bank of Hawaii SmartMoney Seminar series,” Akimseu said.

Bank of Hawaii offers SmartMoney Seminars at a number of its branches, and they’re free to any member of the community who wants to attend. Seminar topics include budgeting, investing, banking basics, and credit. Members began asking about more specific topics, so the bank developed seminars on retirement savings and fraud prevention, among other subjects.

“The purpose was to provide education and tools so people could feel empowered to make good decisions and not just rely on what they were hearing and seeing in the news,” Akimseu said.

SmartMoney Mondays is a weekly segment sponsored by the bank on the local TV program “Sunrise on Hawaii News Now” that grew out of the popularity of the SmartMoney Seminar series. These segments cover a range of topics including home refinancing, managing assisted living costs, reducing debt, saving for college, and many others. Archived SmartMoney Monday episodes are always available online.

Bank of Hawaii has branches across American Samoa and the Western Pacific in places like Guam, Saipan, and Palau. Many of these communities are also underserved when it comes to financial literacy and education. The bank’s online resources and community presentations offer residents of those island communities access to vital financial information that they might otherwise never receive.

Bank of Hawaii participates in the national Teach Children to Save campaign to encourage good financial habits from an early age.

In keeping with its focus on financial education and literacy, Bank of Hawaii participates in the national Teach Children to Save campaign. During a recent event, around 200 volunteers visited schools in Hawaii and the Western Pacific, where more than 3,000 students were encouraged to learn about saving money and making smarter financial decisions.

“Bank of Hawaii is proud to support school-aged financial literacy initiatives through our participation in the Teach Children to Save program,” Akimseu said.

Having an impact at such an early age can help kids develop good financial habits that last a lifetime. Bank of Hawaii keeps up with the students’ financial education as they grow with the Get Smart About Credit program aimed at high school students. Part of the American Bankers Association’s national Get Smart About Credit Day, the program teaches impressionable young adults about credit-worthiness and how what you buy on credit you have to pay back with interest, among other topics.

What it Means to ‘Live Kokua’ While Giving Back

Some Hawaiian words have many meanings, based on the context in which they’re used. The literal translation for ‘Kokua’ is to help, but it also has a deeper meaning. To the employees of Bank of Hawaii, Kokua means fundraising for local community groups and nonprofits, cleaning the beaches and coastlines, and giving back — all with no expectation of reward or personal gain. That’s living Kokua.

Bank of Hawaii understands that everyone in the state is connected, which is why a commitment to the community is one of its driving principles. Events like the bank’s Live Kokua Community Walk raise money to benefit local nonprofits whose missions center around youth, education, and the environment. This year’s walk raised $101,500 for three such organizations.

In the 12 years since the event began, Bank of Hawaii employees and volunteers have raised more than $1.5 million for local causes.

The Live Kokua Giving Campaign is just one of many community efforts in which the bank participates throughout the year. Bank of Hawaii’s Bankoh Blue Crew volunteers are out in the community almost every weekend. In 2017, Bank of Hawaii volunteers donated over 16,135 hours of their time to 359 community service projects.

Being a member of a community can be a comforting feeling, but for the people who call Hawaii home, it means far more. Being a community means sharing not just resources but also a lifestyle. Bank of Hawaii recognizes that and honors its communities by providing access to banking and financial resources that meet their unique needs.