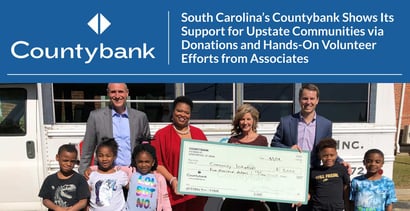 In a Nutshell: While some financial institutions in South Carolina have expanded into North Carolina and Georgia, Countybank remains committed to the Upstate region of the Palmetto State. As the institution nears its 90th anniversary, Countybank continues to stay true to its roots of always striving to serve its customers and communities in the best ways possible. This is reflected in the strong support the Countybank Foundation provides for local causes and charities, including Rebuild Upstate, a nonprofit that repairs structural problems in low-income households. Countybank associates also donate their time by volunteering for a range of causes, from supporting local sports to raising money for The Salvation Army.

On a recent Saturday morning in October, as the humid South Carolina summer was finally giving way to slightly cooler fall breezes, associates of Countybank were swinging hammers in the Upstate cities of Greer, Anderson, and Greenville.

The community bank staff was giving their time to support Rebuild Upstate, a South Carolina nonprofit that helps repair homes of low-income residents to help make those homes safer, healthier, and more livable.

On the same day, the Countybank Foundation donated $7,500 to support Rebuild Upstate’s efforts. The blitz repair project accounted for 248 hours worth of labor, according to the nonprofit.

“Putting people first is at the heart of Countybank’s mission, which aligns with Rebuild Upstate’s efforts to support our neighbors in need by repairing and improving homes,” said Ken Harper, Executive Vice President and Chief Operating Officer for Countybank in an announcement. “Through our partnership, financial support, and hands-on volunteer work with Rebuild, we are playing a part in making the Upstate a better place to live.”

This project is just one of the many ways Countybank demonstrates its dedication to the communities it serves in Upstate South Carolina.

We recently had a conversation with Harper about the Rebuild Upstate project and the multiple other ways Countybank impacts the communities of Greenwood, Anderson, Greer, and Greenville in South Carolina.

Aiming for Maximum Impact with Funds Contributed by the Countybank Foundation

“I think there were tears from all of the folks whose houses we worked on — they were extremely appreciative,” Harper said of the recent Rebuild project. “It was good to help change somebody’s life to some degree. And, selfishly, we were also able to enjoy the camaraderie and opportunity to deepen relationships with associates of varying roles within Countybank in a different way, outside of the bank.”

Harper explained that, as a community bank, Countybank is happy to be able to focus specifically on Upstate South Carolina. He said that, for an institution such as Countybank, it’s imperative to give back to its communities and try to make them better.

“We focus pretty heavily on giving back, in terms of our corporate giving and service,” he said.

Ken Harper is the Executive Vice President and Chief Operating Officer of Countybank.

Most of the corporate giving is done through the Countybank Foundation, which was established in 1971 just for that purpose. The foundation contributed $150,000 to local causes in 2018, according to the Countybank website.

The organizations the foundation supports demonstrate a commitment to a diversity of causes in South Carolina, including Anderson Interfaith Ministries, Creative Advancement Centers, Greenwood Genetic Center, Hospice Care of the Piedmont, Piedmont Technical College, and the Greenwood YMCA.

Harper said there are so many great organizations and causes to support in Upstate South Carolina, it can be difficult deciding where to put the funds. Ultimately, he explained that the foundation takes into account Countybank associates’ preferences and identifies where its monetary contributions can make the most impact.

“We try to narrow it down to fewer, yet, higher impact requests,” he said. “Generally, we focus on health and human services and education. Those have been some of the primary recipients of funding.”

Countybank chose to focus on Rebuild Upstate this year because of its mission to directly improve the dwellings, and consequently the lives of South Carolina residents.

Harper said that, along with being able to donate funds to support a worthy cause, Countybank also values providing direct support to organizations through associate volunteerism.

“So, as opposed to just writing a check, we’re asking how can we also do something to materially follow up with hands-on involvement from our people so we’re giving our time and not just our capital,” Harper said.

Countybank associates volunteer for a number of causes, including running concessions at local football games.

Of course, Rebuild Upstate presented the perfect opportunity because of its unique need for hands-on manpower, with about 1,000 projects identified, he said.

“Giving back to our communities and helping them grow and prosper has always been an essential part of Countybank’s mission,” according to the Countybank website. “Our associates actively support and participate in volunteer opportunities throughout the year.”

Among the annual volunteer activities Countybank associates engage in are running concessions during Greenwood High School and Emerald High School football games, participating in Holiday Ice in Anderson and the Greer Station Oktoberfest, and ringing the Salvation Army bell each holiday season.

Countybank associates also demonstrated an impressive effort in volunteering their time for the Greenwood Miracle League, a baseball league that gives children with special needs or disabilities an opportunity to play the game.

The bank also sponsors an array of community events throughout the year.

During the holiday season, Countybank holds a food drive in its Greenville and Greenwood markets and delivers the foodstuff to places in the communities where it will make the biggest impact, Harper said.

South Carolina is a state that features diverse climates and geography — with warm, sandy beaches on the east coast and the cool, crisp Blue Ridge mountaintops to the northwest. In between, there are communities large and small with unique needs and characteristics.

And in Upstate South Carolina, Countybank understands this well.

For almost 90 years, the community bank has served the northern parts of the state. It has focused its efforts on learning the needs of the community in places like Greenwood, Anderson, Greer, and Greenville, and providing products, services, and community support that make the most impact.

Countybank has been serving communities in Upstate South Carolina since 1933.

“Born during the financial strife and struggle of the American economy in 1933, Countybank was developed by a group of Greenwood businessmen who banded together to better serve their community,” according to the bank website. “The goal was to form a financial institution centered around the ideals of guidance, communication, and relationship building.”

All these years later, Countybank holds true to those founding principles while offering modern, convenient banking services to its communities.

“We’re focused only in the Upstate of South Carolina, and this market has been growing at a pretty rapid clip,” Harper said. “While other institutions have expanded their footprint to North Carolina, Georgia, and beyond, there is still a great deal of opportunity for us to expand market share within our existing footprint.”

This strategy demonstrates to customers and community members how Countybank would rather be the best financial institution in a handful of towns rather than scatter its efforts as far and wide as possible.

The same notion has guided Countybank’s significant efforts in its community support initiatives over the years and into the present day. From monetary donations to volunteering, Countybank and the Countybank Foundation are there when Upstate South Carolina needs them.