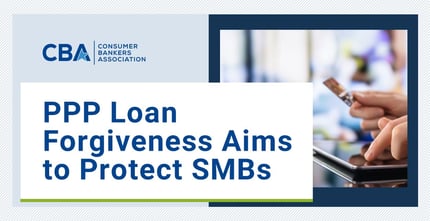 In a Nutshell: As the COVID-19 pandemic forced closures and lockdowns, the U.S. government scrambled to provide relief to individuals and businesses amid the prospect of a major economic recession. A large component of its relief package was the Paycheck Protection Program, which provided businesses with loans to compensate employees and prevent establishments from closing their doors permanently. Many of those loans were dispensed by Consumer Bankers Association member institutions, often at a loss to the organizations. The PPP managed to dispense approximately 14 years’ worth of funds in a single year, and it is now entering its final phase — loan forgiveness. This will allow borrowers to avoid cumbersome debt and move forward with their businesses, helping the U.S. economy recover and grow in the wake of the pandemic.

In early 2020, many businesses found themselves grinding to a halt under the strain of the COVID-19 pandemic. The novel coronavirus was a black box for medical experts and the public alike. The proposed public safety measures carried no guarantee of protecting people from a potentially lethal disease.

As a result, many businesses — especially in the service sector — were forced to close their doors and wait, hoping for the best. While online retail boomed, brick-and-mortar locations were at a standstill. Many shops had no choice but to pay rent and overhead costs for facilities that weren’t bringing in any revenue. For numerous establishments, the danger of going out of business was very real.

With the end of the COVID-19 pandemic in sight, the U.S. Paycheck Protection Program has shifted toward the loan forgiveness phase of the initiative.

And business owners weren’t alone in their financial insecurity. Employees who had been furloughed or laid off were forced to dip into savings to make ends meet, or, even worse, to accrue loan or credit card debt to pay for basic necessities.

In the U.S., the government’s response was the CARES Act. Its provisions were meant to stabilize the economy and ease the financial burden on individuals and businesses. One of these provisions was the Paycheck Protection Program (PPP), which provided relief for small businesses and their employees.

“It was really meant to stimulate the economy and help [prevent] people from losing their homes and their ability to put food on the table,” said David Pommerehn, SVP and General Counsel at the Consumer Bankers Association (CBA), which played an important role in the PPP implementation and delivery. “You have (…) the stimulus checks and things like that, which I think helped, but it was really the PPP program that I think really saved a lot of people from having to lay people off and or shut their doors.”

As the coronavirus is becoming better understood and vaccinations are becoming more widely available to the public at large, the economy is showing signs of recovery, and daily life is inching back toward what we remember as normal. As a result, the PPP is shifting gears and preparing to enter the forgiveness phase, which will allow businesses to shrug off their debt and continue operations, providing ongoing financial security and stability for businesses and their employees.

As noted above, the PPP’s purpose was to provide fast emergency funds to small businesses that didn’t possess the cash or lines of credit necessary to stabilize business finances amid a turbulent economic downturn.

In normal times, many businesses operate on a very thin margin. This is especially true of restaurants, which often only possess funds for about a month’s worth of expenses, including rent and payroll. With lockdowns in place and the future highly uncertain, many establishments — even long-standing ones — faced the possibility of closing their doors permanently due to what, in the insurance industry, could only be described as an act of God.

The Consumer Bankers Association played an important role in facilitating the PPP for businesses around the country.

One option was to seek out emergency loans to pay employees and maintain facilities. This was feasible for some businesses, especially those with existing relationships with financial institutions. But for others, funding wouldn’t have been available in time to save businesses and jobs.

“There’s a lot of variables that are going into the credit quality of a particular borrower and the creditworthiness,” Pommerehn said. “And so PPP was invented a little over a year ago with the CARES Act and was thrown together quite quickly on all sides.”

Obviously, time was of the essence, both in preparation and implementation. According to Pommerehn, the measures put in place allowed about 14 years’ worth of funding to be distributed in a little over a year.

“Our member banks were quick to the game,” Pommerehn said. “The SBA needed a national distribution network to really get these loans out. And the program, as you know, is really set up to be a grant program.”

This means that the loans are 100% forgivable as long as conditions are met. And although the parameters have shifted as new legislation has been enacted, PPP loans have provided a way for businesses to pay bills and pay employees without saddling them with long-term debt.

PPP loans received broad support at every level. The provision was approved on both sides of the aisle as a means of bolstering economic stability during and after the pandemic’s onset. And financial institutions were committed to disbursing funds as quickly as possible.

However, the program still faced challenges in design and implementation.

“You’re kind of building the plane as you’re flying it,” Pommerehn said. “And so it was a learning experience for everyone involved.”

Nonetheless, Pommerehn praised the work of banks in distributing funds to applicants, often at a loss to themselves “from a resource perspective and efficiency perspective.” But the process and functioning weren’t without pitfalls and perils.

“I think that it’s unfortunate that there are some [people] out there who are focusing on some of the negative aspects of PPP, including some of the fraud levels and things like that,” Pommerehn said. “Fraud’s important. Seventy-five percent of all the fraud cases came from fintech in non-depository lenders who aren’t subject to AML BSA requirements.”

Those and other requirements exist to prevent fraud. However, they also presented a roadblock to legitimate lending to borrowers who were in genuine need but who lacked pre-existing relationships with an institution.

“Borrowers with current relationships with lenders got loans quicker because they [had] already been vetted through the AML Bank Secrecy Act requirements that require us to weed out money laundering and those types of issues and really know our clients or our customers who we’re giving money to. Those folks got money before not-existing customers because we had to go through that process with them.” — David Pommerehn, SVP and General Counsel of the Consumer Bankers Association

Overall, Pommerehn considers the program a success, albeit a qualified one, he said. Its effectiveness hasn’t forestalled criticisms, especially in comparison to financial measures taken by foreign nations at the height of the crisis. However, some of these critiques don’t account for the full picture.

“Sweden was good at covering 85% of somebody’s annual salary … and we’re getting $1,400 checks from the government,” Pommerehn said. “But I don’t think people took into account all the relief that was out there. And PPP, again, I think was the big portion of that that people seem to discount. When they’re comparing us to other countries … they’re not considering the success of the PPP.”

PPP loans have served their purpose, albeit with varied results. And as the health and economic landscape continues to change, it appears that the program is beginning to sunset. The final phase will be the loan forgiveness process, which will seek to absolve as much PPP debt as possible.

“We’ve turned our focus to forgiveness and making sure that the process runs smoothly,” Pommerehn said. “We actually led an effort to simplify forgiveness for loans below $150,000. That represents roughly about 85% of all PPP loans.”

David Pommerehn is the SVP and General Counsel at the Consumer Bankers Association.

This is an enormous volume that the SBA will have to process in relatively short order. A simplified process means the administration will be able to do so quickly and efficiently, ensuring the loans do not become a long-term burden for borrowers who have used the money responsibly and as it was intended.

“The original program calls for 75% of the allotted current loan to be used to pay employees — even those who were salaried,” Pommerehn said. “But that was lowered because it didn’t work. A lot of people were having trouble actually getting up to that 75% mark.”

As a result, that mark was reduced to 65%, enabling borrowers to put the remaining funds toward other expenses including mortgages and utilities. Part of the reason for the adjustment was the imbalance between payroll and unemployment compensation when the latter was expanded to protect workers who had already been laid off.

“That was definitely a problem,” Pommerehn said. “I think Congress recognized it and adjusted it to a level that seemed to work, at least for most businesses out there.”

Learning Lessons and Looking Ahead to Future Programs

Pommerehn said that, although PPP loans have ended, there are definitely still businesses and individuals who require loans to get by, and that financial institutions — CBA banks among them — are trying to deliver as many loans as they can, and as quickly as possible.

However, the overall focus is now predominantly shifting to the forgiveness phase, which is currently the most pressing need. Beyond that, the PPP has taught many valuable lessons, both in its successes as well as its shortcomings, and those will also be prioritized moving forward, Pommerehn said.