Up to 90% Savings on Prescription Drugs: PharmacyChecker.com Specializes in Creating Access to More Affordable Medication 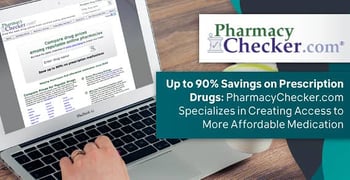 In a Nutshell: Soaring prescription drug prices are no secret, and the situation has led many Americans to seek out more affordable options. One popular strategy has been finding cheaper medication abroad from reputable online pharmacies. But which ones can you trust? For more than 15 years, PharmacyChecker.com has been bringing transparency to the process and featuring drug prices from pharmacies in countries, such as Canada, the United Kingdom, Australia, New Zealand, and India, that can save consumers up to 90% on often life-saving medications.

Not long ago, I found myself in a dilemma that many Americans face: my dermatologist prescribed a cream for a scar, and I headed to a local pharmacy to fill it. Much to my dismay, my insurance wouldn’t cover it, and it was too new to the market to have a suitable generic version available.

Not one to give up so easily, I decided to explore my options. After some research, I found the cream available from an online pharmacy in Canada — and at a significantly lower price.

Now, I could have easily gone without this cream I sought out for vanity purposes, However, for people with chronic or life-threatening health issues, like HIV, cancer, or even high blood pressure, the issue of finding affordable drugs is far more serious. After all, the price paid for not getting necessary drugs can be even higher than what you spend by getting them. Sometimes, your life may even be on the line.

“Around 2001 and 2002, some ConsumerLab.com subscribers began asking about buying Lipitor from Canada,” said Gabriel Levitt, President of PharmacyChecker.com. “They heard that, although technically illegal, you were able to go online and buy medication. The FDA didn’t go after people then and doesn’t go after people now. A lot of seniors’ groups were taking bus trips to Canada, and Tod (Cooperman, CEO of ConsumerLab.com and PharmacyChecker.com) knew that safe online access was needed.”

I was not alone in looking for cheaper medicine online. Kaiser Health News reports 8% of Americans (20 million people) say they have imported medication for personal use due to cost.

As of 2012, 50 million Americans reported they failed to fill a prescription due to cost. This, of course, is not OK, and until the system is improved, people often need to get creative to secure their medications.

PharmacyChecker.com realized that consumers can get 90% or more savings on what their pharmacies were charging and decided to help people get their medication at the lowest possible cost.

PharmacyChecker.com lets consumers compare the prices their pharmacies charge with those charged by different online sites. Often, online prices are significantly cheaper, up to 90%. The site does not only look for the best prices, but it also performs several other comparisons to add extra layers to consumer confidence.

PharmacyChecker.com checks if sites fill orders using licensed pharmacies, require a prescription, and are properly encrypted. Another requirement to be featured on the site is that pharmacies are actually disclosing the countries in which they operate. Since controlled substances and opioid addiction are big problems, the site plainly does not condone international pharmacies selling any controlled drug.

You might be asking, “But isn’t it illegal to buy meds online this way?” According to Levitt, if you are buying medicines for personal use, there has never been a case of prosecution. Those who try to resell the drugs, however, can go to jail, he added.

While many of our readers are in tight financial situations, essential medicines are clearly not something they should avoid buying and using.

However, PharmacyChecker.com does advise readers to look at home first. Often, US pharmacies will charge less on generic drugs than Canada, and if the price of a drug is lower or close to the US price, there is no reason to go international, Levitt said.

Prescription assistance programs can also sometimes help consumers get their medications for free or at a discount, so that’s another avenue to explore.

In August 2015, when startup Turing Pharmaceuticals was acquired by former hedge fund manager Martin Shkreli, the price of Daraprim (an HIV/AIDS medicine) skyrocketed overnight from $13.50 a tablet to $750 a tablet. Put into context, in the UK, Daraprim was $6 a pill at this time.

This is not an isolated case, and not all price increases are being caused by shortages of the drugs. Some are a business strategy of buying the rights to existing drugs and turning them into expensive “specialty drugs.” Such a lack of control in the industry is of serious concern to PharmacyChecker.com, which advocates against these practices.

“While buying medications online internationally is a lifeline, it’s not the long-term solution to the problem,” Levitt said. “It’s part of the solution. I think they should reform the law to create what we know are safe channels so that Americans can expressly, lawfully buy lower-cost medication from Canada.”

He further explained that drug companies should stop using schemes to prevent cheaper generics from coming to market in the US.

“We put together a sign-on letter for Senator Bernie Sanders’ bill, which, by the way, importation has bipartisan support,” Levitt said. “We got 24 groups to just sign onto a letter. We just did a petition for Prescription Justice. We got 62,000 signatures on our policy platform.”

Prescription Justice, started by Levitt, is a “501c4 nonprofit that brings together doctors, lawyers, public health advocates, and companies dedicated to lowering drug prices in the United States,” according to its website.

“We advocate on behalf of the millions of Americans who access affordable imported medications and stand against actions by the pharmaceutical industry that mislead and misinform the public,” the website goes on to say.

Save Money by Buying Medicine Internationally

On average, brand-name drugs cost eight times more in the US than they do abroad, according to PharmacyChecker. Popular, branded maintenance medications can be purchased at an 84% average savings over US prices if ordered online from licensed pharmacies in other countries, with the greatest savings being 94% for the acid-blocking drug, Nexium.

“I am a Medicare patient, and many of my drugs are unaffordable. Silverscript/Medicare pulled a nasty trick on us and moved life-saving drugs over to a Tier 4, which requires us to pay 50% of the actual drug costs,” one user wrote.

“I recommend this site to all my friends, and particularly those in the Parkinson’s community. Meds that have gone generic are still astronomically priced in the US, and patients often abandon taking them. PharmacyChecker.com gives them a safe option to find a secure pharmacy to obtain their drugs at an affordable price,” wrote another user.

Luckily, I now know how to buy prescription creams (or anything else I need) internationally, with the help of sites, like PharmacyChecker.com. The real cause for celebration, however, is that the people who need more serious medicines can now more easily afford them.