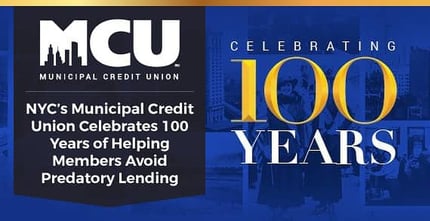 In a Nutshell: Founded in 1916 as a way to allow New York City employees the opportunity to save and borrow at reasonable rates, Municipal Credit Union now serves more than 400,000 members. A century ago, the inaugural branch took up one room in the city municipal building, and had combined assets in its first year of $570. Today, the not-for-profit financial institution has more than $2.7 billion in member assets. As New York’s first credit union, MCU has seen plenty of changes in its 100-year history, but its commitment to serving the needs of its members hasn’t changed. Having expanded membership to now serve health care employees, students of area colleges and universities, and many state and federal employees of the five boroughs, MCU has become an important part of the fabric of New York City.

New York City’s Municipal Credit Union turned 100 years old in October 2016. This makes MCU the oldest credit union in New York, as well as one of the largest in the country. Founded by then-New York City Mayor John Purroy Mitchel, the institution’s initial purpose was to offer city employees a low-cost borrowing alternative to loan sharks.

At the time, these predatory lenders were often the only way for people to access quick cash, and regular bank lending rates were not much better. MCU offered an alternative to these predatory lending practices and allowed members the opportunity to earn money on their savings.

Throughout the 20th century, MCU has served its members and the communities of New York City. It put in place programs to help city workers who lost their jobs during the Great Depression, supported military members returning from World War II with low-interest loans, and has offered assistance to members affected by local disasters.

It also helps with community education programs, scholarships for college-bound high school seniors, and school and youth activities programs. In short, MCU puts into practice the credit union philosophy of “people helping people” in the communities it serves.

Today, in many of the neighborhoods of New York City, payday lenders are seen as the only option for some low-income residents when they need access to quick cash. In keeping with its initial mandate, MCU hopes to help change that by raising awareness of the benefits of credit union membership. We recently spoke with Michael Mattone, VP of Public Relations for MCU.

“We’ve always been there as an alternative, and we have many members who come to us as a viable lending alternative to payday lenders and other high-interest sources of fast cash,” he said.

Michael explained to us some of the differences the membership-based and employer-supported credit union model makes possible. Since credit unions are not-for-profit, they don’t have any pressure to grow their stock price or pay dividends to shareholders.

Almost all big banks and lending institutions are publicly owned through the issuance of stock shares. This means they are beholden to investors. Banks are under pressure to increase profits, and the way they do that is by charging higher fees and higher interest rates on the loans they make. Unlike big banks, however, credit unions don’t feel the same pressure.

The profits earned by a credit union are usually referred to as retained earnings, and they go right back into the capital structure of the institution. This allows credit unions to pay higher savings rates and offer lower-cost loans to its members. It also means they can offer lower fees for their products and services, as well as offering lower minimum deposit amounts.

When we asked him to expand on the differences he sees between MCU and a bank servicing the same NYC neighborhood, Michael explained, “It really starts with the whole structure of the credit union model. We’re member-owned and not-for-profit, so we don’t have to pay any outside investors. We’re able to reinvest our retained earnings back into providing better rates to our members who save with us.”

Another advantage MCU has over a big bank is that they are able to provide more options to potential members with poor or no credit, and those who may not meet the minimum deposit amount at a big bank. It takes only a $5 deposit to join MCU, and become a member. Afterward, there is no minimum balance requirement for the first year, and a low $500 cumulative deposit amount per month after that to avoid fees altogether.

One of the best services MCU offers its members is the opportunity to build savings through small payroll deposit amounts. Many of MCU’s members live paycheck to paycheck, and a single catastrophic incident can spell financial disaster.

To help them start to build an emergency fund, MCU offers a flexible deposit account called a Deposit Plus CD. This account allows members to deposit $250 into a $500 Certificate of Deposit account, and then put in just $25 each pay period through direct deposit. At the end of 18 months, they’ve earned interest on a $500 CD and now have the start of an emergency savings fund.

Other products offered by MCU include Holiday Club and Vacation Club savings accounts. These two savings tools require no minimum balance, and allow members to directly deposit through payroll deductions. Michael provided us with more detail on these savings tools.

In addition to these convenient savings plans, MCU also offers its members access to online educational resources and personal finance tools. These resources are offered to members free of charge, and are designed to help them learn better financial habits, as well as navigate complex topics like buying a car, managing credit, and dealing with identity theft.

Through access to interactive coaches and advisors, people who use these tools can get expert answers to complex questions. There are even resources for students and young adults, to help them learn good financial practices early in life.

MCU is Focused on Future Generations

Speaking of students, MCU is committed to helping college students establish and maintain good credit habits, too. The credit union is reaching out to the 18- to 24-year-old population to encourage them to make good financial choices early in life. This is the way Michael described it to us.

“We continue to expand into our newest field of membership, which involves students from the City University of New York, and most recently St. John’s University,” he said. “We’re expanding our financial education offerings for college students specifically because this is really one of the earliest points in life where you can begin to establish good credit and good financial habits.”

Any student enrolled in the CUNY or St. John’s University system throughout the State of New York is eligible to join and become a member of MCU. As members, they gain access to tools like the College Planning Calculator, articles and tips on a range of college financial topics, and advice on issues like student loan debt.

This is just one more way MCU continues to serve the citizens of New York City and beyond. Even after a century of providing access to low-cost loans, high-quality savings programs, and community-based banking, Municipal Credit Union remains as committed as ever to its mission: “To build lifetime, quality financial relationships with each member by providing competitive products and excellent service.”