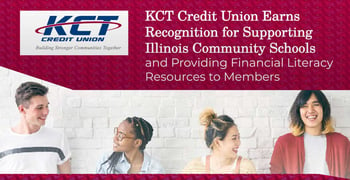 In a Nutshell: KCT Credit Union started in 1937 to serve the Elgin, Illinois, public school district — and remains just as committed to education today. KCT provides donations and financial literacy resources to schools through its popular Affinity Card program. And anyone can visit a branch to get a debt checkup that includes strategies to improve their credit score and reduce interest rates on current debt. Eligible members can also turn to KCT for a Get Out of Debt (GOOD) Loan that features interest rates as low as 7.99% APR. For helping people succeed financially through products and educational resources, KCT earns our Editor’s Choice™ Award for Community Commitment.

Anyone who’s experienced money issues knows that financial difficulties can pop up at the worst possible moments.

For Amy, a member of Illinois-based KCT Credit Union, those problems started after her divorce. She found herself struggling with the debt she had accumulated during her marriage while trying to navigate a new life with her children. After applying for loans through multiple lenders, she visited a KCT branch and worked with Misty, one of the institution’s loan specialists.

“Misty was the first person to listen to me. To relate to me,” Amy wrote in a testimonial about her experience with the credit union. “She took the time to understand me as a person. To look beyond the credit score numbers and to ask questions.”

The two worked together extensively until KCT approved Amy for a loan to consolidate her debt. Upon telling her the good news, Misty nearly broke down into tears along with Amy.

“Because of the care the KCT team has, my life, and the life of my boys, is forever changed,” Amy wrote. “My debt from my old life is gone. I can truly have a fresh start, and I am forever grateful for that.”

Amy’s story is one of many KCT has heard from members of all financial backgrounds. Since the institution started in 1937 as a teachers credit union for the Elgin Public School district, it has prioritized educating its community — member or not.

“A lot of banks typically put people in buckets,” said Sergio Rodriguez, VP of Information Technology/Marketing at KCT Credit Union. “But we tell people that we’ll build them their own bucket. People should be individuals and not put into the categories that society puts us in.”

The path isn’t typical of modern-day financial institutions — and that’s by design.

Take, for example, the branch KCT opened in July 2018. The location — inside a public library — was the first of its kind in America. In many ways, the Gail Borden Public Library branch is a perfect location for a credit union. The library is among the most awarded in the nation and welcomes more than 2,500 visitors each day. Not many banks can generate that kind of traffic.

For its dedication to bettering the financial lives of everyone in its footprint, KCT earns our Editor’s Choice™ Award for Community Commitment.

The Affinity Card Program Gives Back to Area Schools

It seems only logical that a credit union that focuses on education would choose a public library as a branch location. But KCT didn’t just seek out the partnership because of its commitment to the literary arts.

“Opening this branch was a catalyst for us to open our teen checking account,” Rodriguez said. “One of the library’s biggest customer bases is kids, so we wanted to create some products for them that we could launch in conjunction with the opening of the branch.”

Teen checking account holders — and all other members — have access to KCT’s Affinity Program — which is responsible for nearly $10,000 in donations to area schools since 2017. Debit and credit cardholders can choose from multiple free design options that include the logo or mascot of four area schools. Each time account holders use the card, KCT donates part of the transaction proceeds to their school or school district.

The first affinity partner was West Aurora High School, which partnered with KCT in May of 2017. The school’s cross-town rival, East Aurora, partnered soon after. The Geneva School District was the third Affinity partner and, in July of 2019, the School District 300 Foundation for Educational Excellence became the fourth. Rodriguez said that two more schools would join the program before the end of the year.

“District 300 is our latest partner, and it covers three different high schools and the district office,” Rodriguez said. “So we created four different designs for each of the products we offer, which is 12 total designs.”

Not only do the cards show school spirit, but they also contribute to the school’s foundation funding and teaches teens essential budgeting and financial literacy skills.

“We lock those accounts down so that they don’t have any overdraft services,” Rodriguez said. “That way, a teenager doesn’t get themselves in any trouble. Starting with your first financial account can be difficult, and we want to ensure it’s a positive experience.”

KCT doesn’t just provide educational resources to its younger members. Its most successful program has helped many adults get a better picture of their financial health — and gain a new lease on life.

With a debt checkup, anyone — regardless of membership status — can leverage the credit union’s resources to better understand their overall financial state. And, with a little guidance, they can also take steps to improve their outlook as soon as possible.

“People get a checkup on their health every year, but what about their debt?” Rodriguez said. “Most consumers don’t look into that, so we asked both members and non-members to come in and check their debt.”

Part of the checkup shows the consumer how loan or credit card interest rates could decrease as their credit score improves. Just a small dip in interest charges can save consumers thousands of dollars over the life of their debt.

“They can bring in all of the information related to any of their loans, credit cards, or other debt,” Rodriguez said. “We come up with options to get them into loans with lower interest rates to possibly consolidate loans and save on interest charges and lower monthly payments.”

Rodriguez noted that the credit union also gives each checkup candidate some steps they can take to improve their credit score. After a year, if they’ve taken those steps and improved their credit rating, the institution will refinance the loan into a better interest rate.

“It’s the right thing to do,” Rodriguez said. “We’re trying to help our members to get out of debt. If they do what we tell them to do, and they improve their scores, we want to help them get a lower rate.”

The Get Out of Debt (GOOD) Loan is among the most popular options for members who want to consolidate high-interest debt.

“It’s a low rate, unsecured personal loan,” Rodriguez said. “A lot of banks don’t do many personal loans, and, if they do, they come with a very high interest rate.”

The GOOD loan allows members to borrow up to $10,000 for 36 months with rates as low as 7.99% — which is substantially lower than most personal loan rates currently on the market.

Borrowers can also receive special promotional pricing during the first quarter of each year to make the GOOD Loan an even better deal. In early 2019, the loan’s rate started at just 5.99% APR.

And that commitment extends far beyond the doors to its five branch locations in Elgin, Geneva, and Aurora, Illinois.

“We have a team that goes out into the community and partners with the various school districts,” Rodriguez said. “They’ll go to the classroom of any teacher who is interested and run a class on financial literacy, budgeting, and other topics.”

Those lessons have helped hundreds of local children get a head start on building a healthy financial future. And since most schools don’t teach lessons on money management, the students’ interaction with KCT representatives may be their only exposure to financial literacy until they reach their late teens.

“We provide free access to teachers who use the materials in their lesson plans,” Rodriguez said. “It makes it easier to talk to kids about finances.”

But KCT does much more than just talk about financial literacy. The institution is on a mission to serve its community members, school districts, and employee group partners. For some, like Amy, that mission can change their lives and help them get a fresh start on building a happier future.