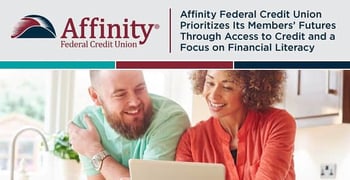 In a Nutshell: Offering an alternative to banks and traditional lenders, credit unions have built their reputations on prioritizing members’ needs, which is hardly surprising as the members are also the owners. Serving more than 140,000 people in New Jersey, New York, and Connecticut, Affinity Federal Credit Union is the largest credit union headquartered in New Jersey. Affinity sets itself apart from other financial institutions by placing a high priority on financial literacy and education, and also by providing financial products to help members rebuild their credit. Through its secured Visa cards, debt consolidation loans, and free financial education seminars, Affinity is making a difference in its members’ lives.

The history of credit unions in the United States is one of providing access to fair and reasonable credit for everyone. Prior to the widespread adoption of credit unions in the mid-1930s, money lending was the sole purview of banks and loan sharks. When President Franklin D. Roosevelt signed the Federal Credit Union Act into law in 1934, it opened the door for the formation of thousands of these member-based institutions, and arguably helped to fuel the largest expansion of individual homeownership in history.

Today, according to the National Credit Union Administration (NCUA), more than 6,100 credit unions serve over 100 million members in the US alone. Credit unions give members access to mortgage loans, auto loans, credit cards, savings and investment plans, and a lot more. But perhaps the greatest benefit credit unions provide to members is a more personalized and customer service-oriented banking experience than traditional financial institutions.

As member-based organizations, credit unions are also able to offer financial services to underserved populations that many traditional large banks might not spend time on. Affinity Federal Credit Union is one such institution that embodies this principle. As the largest credit union headquartered in New Jersey, Affinity serves more than 140,000 members spread across the Garden State, New York, and Connecticut. Established in 1935 — just one year after the Federal Credit Union Act was signed into law — Affinity is also among the oldest credit unions in America.

Since its founding, Affinity has maintained a strong focus on serving the communities where it operates. This is apparent when you look closer at the institution’s commitment to promoting financial literacy and educating its members on topics ranging from identity theft prevention to understanding credit scores.

We recently spoke with two members of Affinity’s leadership team, Theresa Williams-Barrett, Vice President of Consumer Lending and Loan Administration, and Catherine Ricker, Senior Vice President of Human Resources and External Affairs. Covering a range of topics, both Theresa and Catherine gave us great insights into some of the factors that set Affinity apart in the space.

“What separates us from other institutions is our service levels,” Theresa said. “For example, when it comes to lending, we don’t rely on automated decision-making by computers — in fact, we don’t auto-decline any loan request. Instead, we send it over to an underwriter and we contact the member to have a conversation to determine the best path, and if there are alternatives.”

“The important thing about a debt consolidation loan is to include counseling into the process,” Theresa said. “We have two outside companies that work with our members to help them build a budget and cut some of their expenses, as well as establish some savings. And this is a free service that’s part of our debt consolidation program.”

Part of the reason debt counseling is so important in this process is that debt consolidation, when done responsibly, can help improve a member’s credit score. It works by keeping some cards open, but removing an existing balance because the consolidation loan pays them off. This has the impact of reducing a member’s monthly payment amount since a consolidation loan has a lower interest rate, and it can also raise credit scores by lowering someone’s credit utilization rate, which is a key factor in determining credit scores.

“If someone has an available credit line of $50,000 but has credit card debt of $30,000, their score will be negatively impacted by this high utilization — or debt-to-available-credit — ratio,” Theresa said. “If they take out a consolidation loan, now they have that available credit to help with their FICO score. The positive impact can be seen in as little as a couple of months.”

However, members need to be careful and avoid using these cards to accumulate more debt. Otherwise, they’re right back to having high balances with a debt consolidation loan payment on top of it each month.

Build or Repair Credit with an Affinity Secured Visa Card

Another way Affinity helps its members establish or repair credit is with an Affinity Secured Visa® credit card. A secured credit card involves no credit check, since the credit line is backed by a savings deposit in an Affinity account. By using the secured Visa and making on-time payments when the bill arrives, members can establish or rebuild a positive credit history. That’s because Affinity reports to the three major credit reporting bureaus, just as other financial institutions would for most major unsecured credit cards.

“This is considered a credit-builder product, and it has a very competitive rate,” Theresa said. “That’s because we’re not running a credit check, so it’s not risk-based. A lot of the other sub-prime products out there will depend on the credit score and are likely to be higher. Also, there are no application fees or annual fees on the Affinity Secured Visa card.”

The maximum dollar amount for the Affinity Secured Visa card is $5,000, with a $250 minimum. That means a deposit in any amount within this range will establish a credit line in that exact amount, since Affinity matches 100% of the deposit and charges no deposit fees. It’s designed as a way for members to establish good credit habits, while building a valuable credit history. It can also be a solid route for members to transition to an unsecured card in the future.

“We find that a lot of our members start off with this type of card, especially if they’ve had credit issues in the past,” Theresa said. “We see people upgrade to an unsecured card from this card, usually after a year or so of timely payments, as well as experiencing an increase in their credit score.”

Financial literacy and education is another area where Affinity has made a strong commitment to its members. Through a series of interactive and hands-on classes, Affinity has found members can gain long-term benefits from understanding and becoming comfortable with topics, like transactional accounts, savings, credit, and financial institutions, in general.

“We’ve been providing financial literacy programs for 12 years, in partnership with the Affinity Foundation,” Catherine said. “We provide seminars in both English and Spanish to our members, to businesses small and large, to local students, colleges, local non-profits, and the underserved populations in our communities.

“We cover dozens of topics, including identity theft prevention, home buying, auto buying, understanding and improving your credit score, and student loans. We also cover topics, like interview coaching and an economic survival guide for service members and veterans.”

Last year, Affinity reached over 2,000 attendees through 200 financial wellness seminars and webinars. The credit union also places a big emphasis on providing financial literacy for the underserved and immigrant populations in the communities where Affinity is present. This demographic, which Catherine referred to as sometimes “credit invisible,” would have few places to turn to for financial education without an institution like Affinity.

Credit unions can play a vital role in the communities they serve, from offering products and services that help to establish or rebuild credit, to providing a source of financial education that otherwise would not exist. Affinity Federal Credit Union is a prime example of what can be accomplished in some of the most economically diverse communities in our nation. Through reputable, member-based institutions like Affinity, bad credit habits are changed, financial awareness is raised, and lives are changed for the better.

7 Urgent Loans For Borrowers With Bad Credit
Published On: 6/16/21