The Institute for Policy Studies’ Next Leaders Program Gives Young Activists the Skills, Training, and Confidence to Make a Difference 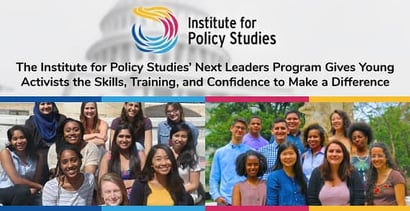 In a Nutshell: The world needs new leaders, and perhaps the best strategy is to create them from the ground up. The Institute for Policy Studies in Washington, DC, has a program called Next Leaders, which offers leadership training to young adults aspiring to be leaders in public policy and grassroots activism. As part of this, IPS recruits people from diverse backgrounds, so they too can make a difference in the world and improve their own future prospects by learning leadership skills. Participants of the program also get hands-on skills training, résumé reviews, and access to an alumni network that can be helpful in securing future jobs.

The world is in a state of crisis when it comes to issues like governance, economic stability, and ethical guidance. In many ways, it’s an unstable world for young people to inherit, which is all the more reason for those inspired to become leaders to get the proper training. A Washington, DC-based think tank, the Institute for Policy Studies (IPS), offers a program called Next Leaders that provides this kind of hands-on leadership training.

We recently spoke with Emily Norton, Leadership and Organizational Development Manager at the Institute for Policy Studies, who shared some insights on Next Leaders, an internship program she helped create.

“Next Leaders offers young activists training in public scholarship — that is, the connection between policy research, advocacy, and grassroots activism,” Emily said. “Through its workshop and events series and individualized mentorship, Next Leaders looks to sharpen young scholar-activists’ voices and hone their skills. In addition to hands-on experience, each cohort will leave the program with a more nuanced understanding of environmental, racial, economic, gender, and peace justice.”

IPS has a strong history in each of these areas. Established in 1963, the progressive think tank works with social movements on grassroots activism and policy research. It was a critical player in the anti-Vietnam War movement, and one of its founders and one of its fellows drafted a document called, “A Call to Resist Illegitimate Authority,” which was signed by well-known scholars and religious authorities and helped launch the draft resistance movement.

“It was important to our founders that our organization was able to speak truth to power,” Emily said.

IPS remained an important player during the Cold War, in opposing the US intervention in Central America, and this legacy continued during the Iraq War. The organization is funded through grants and individual donations and emphasizes peace, diplomacy, and economic equality.

A 10-Week Program that Inspires Leadership

The New Leaders program is a natural extension of the mission of the IPS. As such, it focuses, in part, on equalizing the playing field for aspiring young leaders by giving young people from less-privileged backgrounds the opportunity to acquire leadership skills, which also tends to result in higher and better earnings potential.

“It’s important for us to recruit people from a low-income background,” Emily said. “These are people who have traditionally been left out of the think-tank and advocacy world, especially non-profit leadership. Also, they are folks who cannot afford to do an unpaid internship.”

This approach helps young people from disadvantaged backgrounds break into the world of policymaking. Emily said the IPS ran unpaid internships before the advent of the Next Leaders program.

“We decided to be more intentional and start paying interns four years ago,” she said. A young advisory group helped put the structure together, and Emily said her own approach came from “years of listening.”

“It had been fermenting for a while before we piloted it,” Emily said. “Now, we have a pretty steady curriculum.”

The program focuses on both skills training and theoretical frameworks and conversations about progressive movements, Emily said.

“It’s a really cool activism adult summer camp on steroids,” she said. “During the 10-week program, participants are trained in activities such as making media appearances and writing op-ed pieces.”

They also cover topics such as climate change as a justice issue and restorative justice as an alternative to incarceration.

“The model is popular education with a focus on lived experiences and dialogue — not the traditional sitting in a classroom,” Emily said. “It’s more hands-on. We’ve found folks can learn that way. They lead our staff through three workshops, as well.”

Another important component of the program is “hardcore career development,” Emily added. Participants are paired with a mentor, with whom they undergo “résumé scrub downs.”

“One of the things I make sure everyone has is a really stellar résumé,” she said. “We have a great rate of getting people employed.”

Tackling Issues One at a Time

IPS has a team of experts who deliver lectures on various topics, including ending the drug war, demilitarizing the economy, the criminalization of race and poverty, as well as wealth inequality. IPS also has a foreign policy wing.

An interest in poverty is at the core of IPS, so participants of the Next Leaders program get a good dose of background in the reasons for wealth inequality and how to potentially alleviate the causes. One of IPS’s latest initiatives in this regard is supporting the Poor People’s Campaign, which was originally launched in 1968 by Dr. Martin Luther King Jr. and other civil rights leaders to end poverty, racism, and militarism in America. King’s assassination in 1968 undercut this effort, but recently, two faith leaders have continued his work.

IPS is producing an analysis of the campaign’s four issues, which include racism, poverty, the war economy/militarism, and ecological destruction.

According to the IPS website, “The report finds that, by many measures, these problems are worse today than they were five decades ago.”

It finds an increased number of Americans living below the poverty line and an acceleration of income inequality, as well as new forms of voter suppression laws and mass incarceration that entrench systemic racism. Another finding is the intensification of how racial and income disparities affect access to clean air and water, as well as exposure to environmental hazards. A more in-depth look at these issues will be released in a report later in 2018.

“This is about to blow up and be huge,” Emily said, explaining that this is just one example of an issue that the IPS is working on. “One of the cool things we do is, when you come into our doors, you’re not just insulated at IPS. They are meeting a lot of people, and we have 50 core allied groups.”

Preparing for a Bright Future in Activism

Next Leaders is still fairly new when compared to the IPS, but the program is off to a successful start. The employment rate for participants is high — about 80% immediately post-program — and the alumni network is extensive.

“Once you’re in our program, you’re plugged into a lifelong network,” Emily said. “You have career opportunities forever. We’ve had some really cool successes.”

Graduates of the Next Leaders program have worked in the White House, Michelle Obama’s office, and in grassroots organizing positions with the New Orleans Workers’ Center for Racial Justice. Some participants have had their work published in the Huffington Post and US News & World Report.

Emily understands the value of an internship with IPS, as she was an intern herself before she started the Next Leaders program. She said the hiring policy at IPS is to reach out to candidates from their intern pool first.

When people finish the program, they generally come away with knowledge, new career opportunities, personal growth, and a close network of peers. The workshops and constant evaluation are key to personal growth, Emily said.

“Confidence is a huge takeaway,” Emily said. “They realize: ‘I have a voice, an important story to tell, and it’s resonating. I can do this. It’s not scary; it’s not hard.’”

The curriculum also helps enhance the tight-knit community among groups of participants.

“A long-lasting cohort has been critical to folks’ success,” Emily said. “The last cohort started a group text that’s still going. They are silly, loving, and tight-knit. They care a lot about raising each other up. While skills are important, community is as well.”