How Humans.net Adds a Personal Touch to an Increasingly Impersonal World with a Platform that Helps Users Earn Extra Cash in the Gig Economy 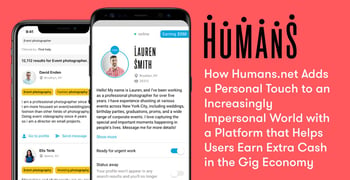 In a Nutshell: Although Humans.net is driven by data and technology, the company prioritizes creating human connections. The platform helps users generate extra income by providing an ecosystem where they can offer their skills and services directly to those seeking them, with no fees or middlemen. Founder and CEO Vlad Dobrynin used the platform himself to help decorate the HUMANS offices when the company was just getting started. Since then, the platform has grown to include 230,000 users. He said HUMANS continually gathers user feedback to help make the platform even better for those offering and seeking services.

In 2016, Vlad Dobrynin came up with the idea for a platform that would help people relocating to other countries find compatriots in their new place of residence, Vlad said.

But, almost immediately, Vlad realized the platform’s potential for much broader applications — it could not only connect expats but could connect all kinds of people for various purposes.

“This is how Humans.net was born,” Vlad said, who is also the CEO of the company. “The first landing page was launched in 2017, and at present, the platform boasts over 230,000 users.”

And the platform presents a fantastic opportunity for people to utilize their skills or service offerings to make some quick cash on the side. Humans.net’s interface connects consumers to providers of specific services, including cleaning, health and beauty services, birthday party entertainment, copy-editing, and much more.

“At the beginning of our project, when we didn’t have a lot of users, we decided to check whether any realistic tasks could be done using our platform,” he said. “We came up with a list of jobs we needed to do right away for our new office and randomly chose the task of buying pictures of New York to put on the office walls.”

Vlad posted the request on HUMANS, and he was almost immediately contacted by a photographer.

“Within 20 minutes, I found the exact photos I wanted and bought them for a mere $20,” he said. “Next, we found a handyman who came to the office on the same day and hung the pictures. We decided that there is something worthwhile to our product.”

Since then — as evidenced by its large user base — thousands have used HUMANS to either peddle their services and boost their income, or to find just the right person for the job they needed to be accomplished.

HUMANS’ Heartbeat is Its Matchmaking Algorithm

“Humans.net is a technologically advanced, data-driven platform that connects people and companies with each other,” Vlad said. “It cuts out middlemen and brings together people who are looking for services with those who provide services.”

In other words, the company invests in the growing gig economy system, he added. The platform solves the issue of finding one-time or full-time service providers in a wide range of industries.

The fundamental component of HUMANS is the matchmaking algorithm that works with all available data relative to people and their skills.

Vlad Dobrynin is the Founder and CEO of Humans.net.

“To illustrate the key features of the platform, let’s take a quick look at existing online services,” Vlad said. “Google, for instance, indexes websites. It’s great because you can find almost anything on Google. The only problem is that you can’t find people. One helpful alternative is LinkedIn, but that platform is essentially a repository of digital resumés.”

He said it is possible to find people with specific skills by reading through their LinkedIn profiles, but it is still a niche network because it is focused only on professionals.

“What about Facebook?” Vlad asked. “Well, Facebook data is neither fact-checked nor indexed. You don’t know which profiles are real and which ones are fake. In the best case, you may find a long-lost friend from school or college after half an hour of searching.”

By contrast, HUMANS is a fundamentally people-oriented system, he said. It brings together a wide range of people who are both seeking and providing services. The latter may range from a quantum physics or music teacher to a gardener or cleaner, according to Vlad.

“Humans.net enables every user to offer or locate services and make contact with the right service providers,” he said. “The matchmaking system deals with all the big data and helps to find what you need in a very human-like manner.”

As Vlad mentioned, Humans.net eliminates the middleman and puts those offering services directly in contact with those seeking services. And it does all this without charging fees — the service is completely free.

This approach gets to the heart of Humans.net’s vision for its role in an increasingly impersonal marketplace — human interactions.

“On HUMANS, people can find others and interact effortlessly without any barriers, fees or middlemen,” according to the company website. “A human can survive and thrive in the modern world by realizing their boundless potential whether in work, business, or day-to-day life.”

The platform aims to be the most trusted, fully decentralized social network out there by enabling more efficient human-to-human interactions around the world.

“Using data science and AI, our marketplace will be capable of cataloging the skills, knowledge, and interests of billions of humans; essentially serving as a HUMANS Global Resource Bank for all people and all businesses,” according to the company.

This approach and the decentralized nature of the platform opens HUMANS up to a huge variety of applications in the future. And its elimination of middlemen and fees will help to make its potential use cases even more realistic and convenient.

“HUMANS believes there is great potential to expand its platform by future development efforts,” according to the website. “Since HUMANS’ model was founded on a new set of principles designed for the 21st century — collaboration, openness, interdependence, and integrity — it can easily be applied to any industry or any market.”

These use cases will be based on the proprietary HUMANS Open Multi-featured Ecosystem, or HOME, which the company hopes to develop in the future, according to the website. The company believes it can help third-party businesses and service providers to develop their own offerings by leveraging the HOME technical infrastructure and its users, creating a mutually beneficial platform for all.

The company envisions HOME playing a role in a multitude of industries, including music promotion, insurance, news, marketing, parking, and security.

Vlad said hearing stories about connections made via the HUMANS platform and other user feedback is an integral part of the company’s success.

“It is impossible for us not to collect feedback, as our marketing is like a living organism, balancing between different industries and geographies to maintain the equilibrium of users and services,” he said. “Furthermore, we are improving the UX based on our users’ feedback. We have recently introduced recommendations inside profiles to improve the search experience for our users.”

As far as success stories, Vlad offered a couple of other examples besides his own success in acquiring art for the HUMANS office.

Obtaining user feedback and using it to help guide development decisions is essential to the company, said Vlad.

“Another interesting story I’ve heard is about a journalist who was writing a review about a hospital but was afraid to take photos there,” he said. “He used our platform to find a photographer who took all the necessary pictures. The review was submitted on time.”

Vlad also mentioned a math professor who used HUMANS as an opportunity to offer his services to teach poker.

The company name and the Humans.net domain was acquired to help emphasize this focus on the platform’s users. And this holds true in ways above and beyond what many companies would do for its users.

Since HUMANS does not charge any fees to users, it generates revenue through advertising, and even shares its profits with users.

“What’s more, as we succeed, so do you,” according to the company website. “Humans.net returns 25% of the platform’s total revenues to users who are active on the platform.”

Vlad said the company’s ultimate goal is to reach people all around the world.

“Regarding the product, we are developing new functionality around goods, so users will soon be able to buy and sell different items on the same platform, along with the services they provide,” he said. “It will be a new experience for our users as they will receive a whole array of new opportunities to expand their on-demand businesses.”