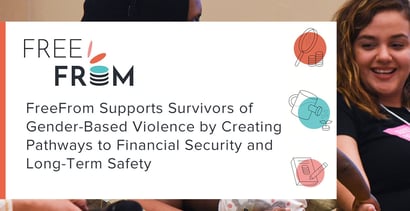 In a Nutshell: Even after survivors of gender-based violence are out of harm’s way, they are often left with financial burdens resulting from the abusive situation they were in. FreeFrom is an organization that helps survivor services lay a foundation for sustainable financial security — filling a gap in survivor services. FreeFrom achieves this through several strategies, including providing shelters and other organizations with assistance in teaching survivors ways to generate and protect their assets. It also works directly with survivors by leveraging technology with its B2C approach, and seeks to bring about change at the systemic level by influencing legislation and raising national awareness.

Those numbers may come as a shock to some. Sadly, they may be no surprise to others. Either way, the numbers are disheartening, to say the least.

Sonya Passi was just 16 years old when she learned through an awareness campaign at her school just how widespread gender-based violence was and it immediately resonated with her. After launching the Family Violence Appellate Project (FVAP) and FreeFrom, it would eventually become her life’s work.

Passi grew up in England and earned her B.A. and M.Phil. from Cambridge. Then she moved to the U.S. to earn her J.D. from the Berkeley School of Law. It was during her time at Berkeley that Passi began the FVAP, the first and only California organization to provide pro bono appellate legal services to domestic violence survivors.

As Passi became more immersed in the domestic and gender-based violence movement, it became clear that because leaving abusive is so expensive, leaving didn’t immediately lead to freedom, said Tannia Ventura, the Director of Partnerships and Education at FreeFrom.

“There was a huge need to appeal cases related to domestic violence because a lot of times children were ending up with the person that caused harm just because they had more money or because they had a home or stable job,” Ventura said. “But the survivors themselves often did not, because domestic violence has financial repercussions that sometimes last a lifetime.”

FreeFrom was born out of Passi identifying the need for an organization to provide a path to financial security for survivors, Ventura explained.

“FreeFrom’s mission is to create pathways for financial security to help survivors of gender-based violence build meaningful wealth so that they can heal themselves, their families, and their communities,” Ventura said.

For those unfamiliar with the term, gender-based violence refers not only to domestic violence but describes violence that is rooted in exploiting unbalanced power relationships between genders.

Tannia Ventura is the Director of Partnerships and Education at FreeFrom in Los Angeles.

“Gender-based violence (GBV) is violence that is directed at an individual based on his or her biological sex OR gender identity,” according to Women for Women International. “It includes physical, sexual, verbal, emotional, and psychological abuse, threats, coercion, and economic or educational deprivation, whether occurring in public or private life.”

Ventura said FreeFrom sees financial well-being as the access point to healing for survivors of abuse.

“Healing is extremely expensive,” she said. “Being a survivor costs an average of $104,000 in lost wages, medical expenses, and everything. That’s a lot of money, for some people that’s more than two years’ salary.”

Although this is the financial reality for so many survivors of gender-based violence, Ventura said not much had been done to address this until FreeFrom stepped in to fill this gap.

“We envision a world where survivors have sustaining income, savings and credit with which to build wealth and the resources to support individual, intergenerational and community healing,” according to the organization.

FreeFrom also envisions a world where the perpetrators of abuse are held financially accountable in helping survivors avoid being saddled with the cost of their abuse.

Ventura explained that FreeFrom carries out its mission through three main strategies.

“We are not a traditional shelter, drop-in type of organization,” she said. “There are a lot of those and they are very important in the movement. But we are looking at long-term financial stability.”

She said many of those organizations work with survivors for up to two years and FreeFrom’s strategies are designed to help survivors remain safe and financially secure for years afterward.

“What else can we do to kind of build an ecosystem of financial support for folks?” Ventura asked. “So we have three categories. There’s what we call our B2B or business-to-business, where we support other organizations in the gender-based violence movement (learn) how to do financial capacity building work with their clients.”

FreeFrom implements a three-pronged strategy that includes supporting organizations and individuals and working for systemic change.

This includes training staff at shelters and other entities across the country on ways they can support survivors in generating income, protecting their finances, and building assets.

FreeFrom is also studying the effect capacity building services have on the success of a survivor’s journey. The organization hosts an annual Survivor Wealth Summit to further educate and build support for survivors and the organizations they work with.

“A lot of our work is done through technology and innovation because there are a lot of survivors out there who are never going to walk into a shelter or who may be in rural areas of the U.S. who just don’t have access to a center and services,” Ventura said.

Leveraging technology to meet the needs of these people is extremely important. This means exploring peer-to-peer financial coaching models and social enterprise initiatives such as GIFTED by FreeFrom — an online store selling all-natural beauty products made by survivors in L.A.

Helping Survivors of Abuse Determine Their Eligibility for Monetary Compensation

Many conversations around gender-based violence center around getting survivors out of the abusive environment and into a safe place. Short-term monetary needs may be met through assistance and FreeFrom is working hard to help survivors establish long-term sustainable financial strategies.

Oftentimes, the organizations helping survivors with their more immediate needs may not realize that survivors of gender-based violence may be eligible for monetary compensation for their suffering.

FreeFrom assists survivors in determining their eligibility through its Compensation Compass, a mobile ready tech platform, which falls under the umbrella of its B2C strategy of innovation.

“The Compensation Compass is available on our website,” Ventura said. “And it’s available in all 50 states. It’s almost like an interactive service that asks about your experience, what hardships did you endure, and what kind of compensation you are looking for.”

She said the tool helps guide survivors toward legal avenues for compensation.

After users answer several questions, the Compensation Compass will direct them toward their most likely means of obtaining compensation.

“Whether that’s Victims of Crime funding, civil tort litigation, small claims court, etc, the tool can help survivors determine what’s best for them and gives them detailed instructions on how to follow that avenue of compensation,” Ventura said.

Altogether, the tool offers four possible avenues to compensation to help recoup expenses incurred as a result of the abuse they suffered. Over 25,000 people used the Compensation Compass in 2019.

As the COVID-19 pandemic plays out across the globe, many parts of the U.S. have been under stay-at-home orders for more than a month. For people dealing with gender-based violence, being stuck at home can make a bad situation even worse.

FreeFrom has been working diligently to determine how it can help navigate these difficult times.

“One of the most exciting things that we’re doing is fundraising for a COVID-19 emergency grant fund for survivors,” Ventura said. “The financial need of survivors is extremely high and our fundraising efforts are ongoing to meet the demand.”

“We’re hoping to provide emergency grants to survivors who are in urgent situations, which can be very valuable for someone in need,” she said.

FreeFrom has also made available a COVID-19 response guide to community leaders, organizations, and institutions.