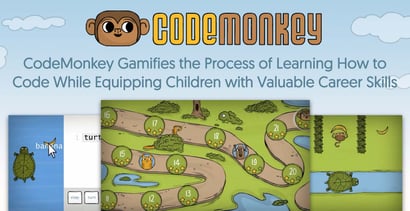 In a Nutshell: Computer programming is no longer a skill reserved for Silicon Valley offices and high school AV club kids. The world around us is powered by computers and coding is a highly valuable skill across many industries. CodeMonkey teaches children coding basics from an early age, preparing them for successful future careers. Coding Adventure, the company’s first product, teaches children 8 to 14 coding skills using basic commands in CoffeeScript. But CodeMonkey has gamified coding programs for students of any age. The games can be implemented in the classroom or at home for a fun learning experience that provides children with a solid foundation in coding knowledge.

Sure, computers can make amazing computations at incredible speeds. And they seem to magically transfer the letters we type on our keyboards to our monitor display.

But computers are just responding to pre-established instructions in the form of code, powered by one or several programming languages.

Without code, computers would be less useful than a typewriter.

The average American can likely go a lifetime without giving computer coding a thought, but it lies just below the surface of nearly every aspect of our modern lives, quietly responsible for the functionality of smartphones, laptops, vehicles, and security systems, just to name a few.

And computer programming skills are a crucial part of the massive and growing tech industry today.

For young people, knowing how to code from an early age will be a valuable skill in a vast array of future careers, even if they don’t end up working directly in a tech-related field, said Boaz Zaionce, the Vice President of Marketing at CodeMonkey.

CodeMonkey helps to foster these skills in school-aged children through a variety of programs that gamify the coding experience. Zaionce said CodeMonkey’s founding team modeled its approach on research-based methodologies established by MIT.

“The founders wanted to make games that are engaging,” Zaionce said. “Kids can have short attention spans for studying, so if you can get them to engage in something educational, it’s a win.”

CodeMonkey kicked off its gamified learning platform with Coding Adventure, which lays the groundwork for young students to learn text-based coding through a language called CoffeeScript.

Zaionce said the company selected CoffeeScript — a real if seldom-used, programming language — because it’s like a mix between JavaScript and Python. And the young coders only need to use words and numbers, rather than the more complex language that includes hyphens and commas.

Coding Adventure follows a monkey on a journey to retrieve his bananas that were taken by a fruit-loving gorilla.

“Coding Adventure is geared toward kids from ages 8 to 14 in the U.S.,” Zaionce said. “It can vary in other countries. In China, Coding Adventure could be a good tool all the way up to the age of 18 because English is a second language for those students.”

The game takes students through more than 400 challenges as the monkey traverses jungles and imaginary lands to find his stolen bananas. Simple commands show students how to make the monkey turn left or right, walk a predetermined number of steps in a specific direction, or even step on a turtle’s back to cross a stream, and demonstrate how coding translates to real, on-screen action.

“Coding Adventure fosters the development of executive functioning skills, such as problem-solving and planning, as well as geometric and mathematical thinking,” according to the CodeMonkey website.

The game begins with a linear pathway of coding challenges, and as students complete each mission, the challenges are automatically graded.

“Students also receive personalized hints and tips to help facilitate their progress along the way at a pace that is right for them,” according to the website. “This feature of the platform renders it appropriate for a broad range of levels and learning styles.”

CodeMonkey’s Selection of Courses Offers Something for Every Learning Level

Since launching the banana-centric Coding Adventure, CodeMonkey has continued to add new games for all ages and skill levels.

CodeMonkey Jr. is designed for pre-readers, ages 4 to 6. In this more scaled-back game, children help the monkey collect bananas and unlock a treasure chest in a brightly colored world full of interesting creatures. All while learning the building blocks of coding skills.

“The children don’t need to be able to read or write, they just drag blocks of sand to accomplish the tasks,” Zaionce said. “And it helps them understand the algorithms behind coding.”

Dodo Does Math aligns with Common Core Standards for second- to fourth-grade math skills by helping a mother dodo bird get to her eggs.

Boaz Zaionce is the Vice President of Marketing at CodeMonkey.

For students who have mastered the original Coding Adventure, Game Builder takes their coding skills to the next level where they learn to create their own games.

“In Game Builder, the students can make simple versions of games similar to Super Mario Bros.,” Zaionce said. “They use motion, gravity, all these different elements. They can program the characters to jump or fly, or even do super jumps.”

Game Builder even has a feature in which students can create or remix their own versions of the classic arcade game, Frogger.

“Students will learn how to program a chatbot that will act as the game’s host in a popular guessing game where players need to guess the correct letters in a secret word,” according to the website.

Coding Chatbots begins with very simple Python-based coding activities and grow increasingly more complex until the students are able to create their very own chatbots.

Students Can Play in the Classroom or at Home

“In general, the coding education industry is very geared toward teaching in the classroom,” Zaionce said. “CodeMonkey is too, but we also offer our products for home use.”

He said teachers don’t even need to have a coding background to teach the classroom games. CodeMonkey provides detailed curricula that include how to engage students in the program, what to teach, and what to discuss in the classroom.

“They can basically just follow the lesson plans we provide, which are about 45 minutes each,” Zaionce said. “They don’t have to be a coding whiz, they just have to teach.”

Every teacher has a dashboard and can see the progress of each individual student. Zaionce said this helps teachers assess if a student is struggling with a particular area or if he or she is taking significantly longer to solve a problem than other students.

“CodeMonkey for home use is similar — the kids go through the programs, and the parents monitor their progress,” he said. “If the child is self-motivated, it’s a great option.”

CodeMonkey is also popular in summer camps and in after-school programs.

The company is also reaching students through its annual Code Rush competition in the U.S. and Canada. The 10-person teams have two months of practice challenges leading up to the two-week competition.

“The idea behind Code Rush is not necessarily to teach code but to excite them about coding, and they can win prizes along the way,” Zaionce said.

“The winning teams will receive a yearly CodeMonkey classroom subscription, an official trophy plaque from CodeMonkey,” according to the Code Rush web page.

With its mission to continually refine its course offerings and provide fun, educational experiences to children of all ages, Zaionce said CodeMonkey is gearing up to release a new Python-based course for students age 14 to 18.

“It’s going to be a really cool experience; it’s an even more gamified program than our current Python-based program,” he said. “We’re really pushing Python now because it’s becoming a very popular language. If another language eventually grows in popularity, we’ll focus on that as well.”

He said CodeMonkey teaches coding concepts, which means that no matter what programming language is being used, the students can learn it and understand it based on their CodeMonkey foundation.