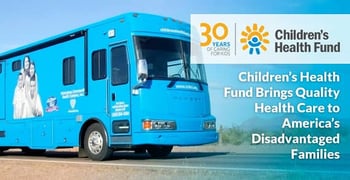 In a Nutshell: Child poverty rates in America are among the highest of all developed nations. In addition, more than 20 million children in the US lack access to quality health care. Children’s Health Fund is working to change that latter statistic by bringing health care directly to underserved families and kids in communities that need it most. Through its mobile pediatric medical clinics, also known as “big blue buses,” the Children’s Health Fund has been providing access to health care for America’s impoverished families for more than 30 years. CHF believes, by reducing the health barriers to learning, children can escape the cycle of poverty and become productive members of our society.

In 1985, famed musician Paul Simon was in Africa working on the “We Are the World” campaign for famine relief along with Dr. Irwin Redlener, then Medical Director of USA for Africa.

The two native New Yorkers realized they shared a common interest in helping those less privileged, and in giving back to society. Once back in New York City, Simon and Redlener agreed that there were needs right here at home that weren’t being addressed.

Touring the Martinique Hotel, which at the time was a city-run short-term shelter for homeless families in midtown Manhattan, the two men were appalled at the squalid conditions people were living in. It was obvious to both men that the welfare needs of the children were not being met. They decided then and there that something had to be done for those children and their families.

Joined by his wife Karen, Dr. Redlener teamed up with Simon and formed the New York Children’s Health Project in 1987, which soon became known as the Children’s Health Fund. Together, the three founders conceived a plan to create a mobile medical clinic that would deliver health care to the homeless children of New York City.

With an initial $90,000 donation from Simon, the first mobile pediatric medical clinic, which would come to be known as the big blue bus, was put into operation, providing medical care to many low-income children for the first time.

From West Virginia to rural Idaho, Los Angeles to Detroit, Children’s Health Fund administers no-cost medical and dental care to families in need. The mobile clinics are also staffed with trained social workers, who educate parents on social services available to them and their children. To find out more, we recently spoke with Meredith Shapiro, the Communications Manager for Children’s Health Fund.

“The Big Blue Bus is a doctor’s office on wheels, so any service you could get at a primary care physician’s office, you can get in the mobile unit,” Shapiro said. “The mobile units go out into the communities on a set schedule, so families know when their doctor will be there and when they can get help. They are set up near schools, by clinics, by WICs, all over.”

Quality Healthcare for Every Child

Children’s Health Fund is committed to expanding access to comprehensive primary care to America’s neediest and most disadvantaged children. Immigrant families, homeless children, and many children in low-income households may have never received a comprehensive health screening or exam.

“These kids that come to the mobile units might not have seen a doctor before, so they need more than the typical 20 minutes that would be the standard checkup,” Shapiro said. “They may need immunizations, a health screening, a fluoride treatment, and to have their teeth cleaned. It’s really a comprehensive care model that we offer.”

It is estimated that more than 20 million children in America have barriers to accessing health care. That number includes uninsured children and children who may have basic public insurance but lack care for specialized pediatric needs. The barriers these children face in receiving the care they need is often not just related to financial resources. Geographic and transportation barriers are common causes for lack of medical and health treatment.

Through its fleet of Big Blue Buses, Children’s Health Fund is bringing quality health care to kids in need.

The federal government has identified certain geographic areas in the country, designated as Health Professional Shortage Areas (HPSA), where access to health care is lacking. The number of health professionals in these areas is insufficient to meet the health care needs of the population. CHF has estimated that more than 14 million children live in HPSAs.

The team at Children’s Health Fund knows that to ensure these underserved children get the health care they need, caregivers must go to them. With its unique model of health care delivery, CHF offers comprehensive care to children who otherwise would have no access to a healthcare professional, let alone more specialized care.

As a result of his three decades at the helm of Children’s Health Fund, Redlener has realized many children don’t succeed academically because they have health conditions that are known to interfere with learning. These health barriers to learning include impaired vision, hearing problems, uncontrolled asthma, mental health and behavioral problems, dental pain, persistent hunger, and lead poisoning.

Through its Healthy and Ready to Learn initiative, Children’s Health Fund is helping to ensure every child has a chance to succeed in school and in life. Many of the conditions prevalent in vulnerable populations are easily treated if they are recognized and addressed. Working with educators, Children’s Health Fund is leading an innovative effort to identify and treat children with health barriers to learning.

“We go into the schools and educate teachers and others about these common health barriers to learning,” Shapiro said. “We stress that kids need to be healthy in order to learn, and we want kids to get a good education to help them escape the cycle of poverty.”

One challenge is to get the federal government to step in and create national standards on screening for children’s health issues. Most states don’t require kids to be checked for health issues to attend school. While 80% of states require vision screening for students, only 49% require a comprehensive health exam, according to CHF-supported research.

“There is inequality around the nation in how we take care of our kids,” Shapiro said. “One of the things we’d like to see is increased federal support and guidance to enable every state to provide critical health screenings.”

The organization advocates strongly in support of federal programs that protect the needs of vulnerable children, and Children’s Health Fund doctors regularly meet with congressional representatives to make them aware of what’s needed. Providing that perspective and that voice for kids is an important part of what CHF does.

Another thing the team at Children’s Health Fund has recognized is that, when disaster strikes, it’s often the most vulnerable who are hardest hit.

With its mobile medical clinics, CHF can quickly respond to a disaster and provide the medical, emotional, and mental health response that is so desperately needed in these situations. From hurricanes to the Gulf Coast oil spill to the drinking water crisis in Flint, Michigan, CHF and its mobile clinics are there to help families recover.

Children’s Health Fund also collaborates with the National Center for Disaster Preparedness in an effort to document and assess the impact of major disasters on children. Supporting not only the healthcare needs, but the mental health needs of children who experience the trauma of such catastrophes is of critical importance.

CHF teams often stay at the site of a major disaster for months or years after the event — an example of its commitment to helping children and families. The organization recognizes that families need ongoing attention to recover from the physical and emotional damage wrought.

For more than 30 years, Children’s Health Fund has kept the promise made by Simon and the Redleners to meet the health care needs of the most disadvantaged and vulnerable children in our society. Through the selfless dedication of CHF doctors, nurses, and other professionals, 290,000 medical and health education visits are made each year. Countless children have been seen and treated, and their well-being is directly attributable to these heroes.