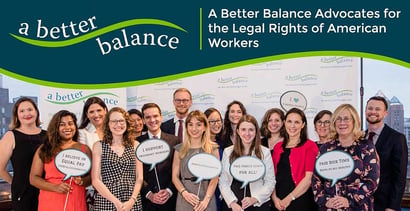 In a Nutshell: The U.S. is the world’s economic leader thanks to the contributions of productive American workers. However, worker rights and protections have not always kept pace with economic achievements. A Better Balance is a legal nonprofit group that advocates for worker rights, including paid family and medical leave, pregnancy non-discrimination, and protections for new or adoptive parents. The organization works at a grassroots level to pass laws and local ordinances, as well as educate workers on their rights, so they can find a balance between work and life.

Throughout most of the 20th century, the United States was the economic envy of the rest of the world. Products stamped “Made in America” were seen as some of the most innovative and highest quality items on the market. That commitment to quality and production is what led the U.S. to become the first great economic superpower of the modern era.

One of the primary reasons for that unprecedented success was the dedication of American workers. For nearly a century, American companies dominated the global landscape thanks to an efficient and determined workforce.

During that time of growth, however, American workers experienced inconsistent rights and protections on the job. Initially, labor laws were slow in gaining traction, and unions had mixed results when it came to providing security for all workers.

Jared Make, Senior Staff Attorney at A Better Balance, spoke to us about how the organization advocates for workers’ rights.

Since entering the 21st century, the U.S. has been competing in a new global marketplace, and balancing workers’ rights with the need to remain competitive is a challenge. At a time when the focus is shifting toward national interests, fairness and job protection rights for America’s workforce has never been more critical.

A Better Balance is a national legal advocacy nonprofit that promotes fairness in the workplace and aims to help employees balance careers and families. Since 2006, ABB has sought to address the growing tensions between work and family responsibilities through advocacy, policy changes, direct legal representation, and educating workers on their rights under the law.

“A Better Balance is staffed almost entirely by lawyers,” said Jared Make, Senior Staff Attorney at ABB. “Our mission, broadly speaking, is to leverage the law to ensure workers aren’t forced to choose between caring for loved ones and their economic security.”

ABB, which is headquartered in New York, leads worker rights campaigns around the country while advocating for new and updated laws — including paid sick time and paid family and medical leave. The organization also has offices in Nashville, Tennessee, where it is fighting for laws protecting against pregnancy discrimination, among other important issues.

A Better Balance was founded in March 2006 by a group of women’s rights lawyers who saw the need for change. Laws had not kept up with shifting demographics, and more women were working, but still had responsibilities as primary caregivers. With longer and less predictable work hours, they had to choose between family responsibilities and making a living.

To help these often low-income and single mothers in the workforce ABB participated in drafting a model paid sick leave bill that has been adopted by states and cities around the country. In 2006, San Francisco voters passed the country’s first law providing workers with a minimum amount of time off for personal or family health needs, and in 2013 New York City did the same with legal support from ABB.

“When I started at ABB in 2010 there were only two laws on the books guaranteeing workers paid sick time, in San Francisco and Washington D.C.,” Make said. “We’re now up to 11 states that have passed statewide paid sick time laws, and more than 30 local jurisdictions that have passed laws — including the three largest cities in the country.”

The U.S. is one of the only industrialized nations in the world that doesn’t have a federal paid maternity leave program — let alone one for paternity, adoptive, or foster parent leave, all common around the world. Americans have the Family and Medical Leave Act (FMLA), but, under the law, time off is unpaid, and it only covers certain workers at larger employers.

ABB worked on the ground to pass a strong paid family leave law in New York that allows workers to bond with a new child, care for a seriously ill family member, or address certain military family needs. Similar laws have passed with ABB’s legal support in a number of other states, including California, New Jersey, Rhode Island, Massachusetts, Washington State, and Washington D.C.

Another area of focus for ABB is advocating for the rights of pregnant workers to be allowed reasonable accommodations. One pregnant worker, Takirah in New Jersey, had been forced out of her position as a family service worker because her doctor restricted her from lifting too much weight.

Takirah reached out to ABB’s legal hotline, and the group agreed to help. Lawyers from ABB contacted the employer and explained their obligations under New Jersey law to provide reasonable accommodations for pregnant employees. Within two weeks Takirah’s employer had offered her a lighter duty position until she gave birth.

Educating workers on their rights under various statutes is one of ABB’s most critical roles. The group’s website includes a Know Your Rights portal, where workers can select their state and discover their rights in various categories. In the areas of pregnancy and parenting, for example, workers can browse state-by-state guidelines for things like temporary disability insurance, breastfeeding in the workplace, paid family leave, equal pay laws, and more.

“We also work on issues having to do with fair scheduling. A lot of workers experience changing and unpredictable work schedules, which makes it hard to arrange for childcare, account for school schedules, or provide other types of caregiving,” Make said.

Through its Know Your Rights portal, ABB helps workers understand their local laws.

The Know Your Rights portal is updated by ABB staff as new laws and regulations pass in various jurisdictions. It is a valuable source of information that is always available to those who need it most.

For questions about rights that may not be covered in the online portal, workers can access updated information by calling the ABB’s confidential helpline. Make said that many of the questions the group takes on its helpline are from workers who are members of the LGBTQ community.

“The legal status of LGBTQ individuals can look different depending on where they’re located,” Make said. “From how relationships are recognized, to how families are started, and also the patchwork of employment nondiscrimination laws that we have in our country — it leaves a lot of gaps for these workers.”

Working with Local Officials and Jurisdictions on Positive Policy Changes

While American workers are the driving force behind the country’s economic power, workplace rights in the U.S. often lag behind those in many other countries.

Since its inception, A Better Balance has worked with local officials to advance the legal protections afforded workers and families. Because of the organization’s work, many employees have rights at the local level, even if they’re not protected under federal laws. One example of this is in Colorado where Make is currently based.

“I’m excited to be in Colorado because there’s an active campaign to pass a paid family and medical leave insurance program that would ensure workers can take paid time off to bond with a new baby,” Make said. “That same program would also allow you to take paid time off to care for a seriously ill family member or for your own medical needs.”

The program would be especially important for low-income workers and families, as they can least afford to take unpaid time away from work. Often they are forced to make an impossible choice between family and employment. If more progressive and fair laws pass, fewer workers will have to make that choice.

And ABB believes in a balance between worker rights and the rights of businesses to be efficient and competitive. The organization strives to show that a healthy and happy workforce is good for everybody — including employers.