How to Understand the Government Shutdown 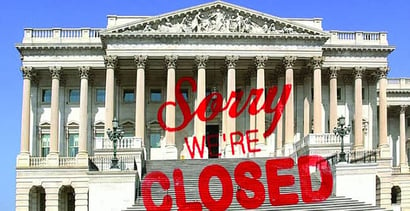 David Andrew is a former New York Life financial adviser, holding Series 6 and Certified Financial Planner credentials from his years with the company. He also holds degrees in economics and finance from McGill University. David is now a well-published finance writer with special expertise in credit cards and auto insurance. In addition to his work on BadCredit.org, his articles have been featured on eHow, Zacks.com, TheNest.com, Chron.com and other popular sites. When he's not keeping up with the latest news in the world of finance, David enjoys playing tennis and golf.

This was a bizarre move that impacted the entire country. The idea of a government closing down is a little strange and many people did not realize what was going on.

It is important to have an understanding of how the shutdown works so you can figure out how this move affected your life.

1. Understand how a shutdown begins.

In order to keep the government running, Congress needs to approve a budget. This budget decides how much the country will spend on different programs and departments.

The reason the shutdown happened this year was because Congress was not able to pass a budget deal by the deadline, so the government stopped funding many different programs.

The American political system is stuck in gridlock because the two parties strongly disagree on many issues. This shutdown was set into motion because of Republican opposition to Obama’s new health care program, the Affordable Care Act.

Republican leaders kept trying to pass a budget that did not fund the Affordable Care Act, which the Democrats rejected. They only were willing to accept a bill that funded the entire government.

Since the two sides could not come to an agreement before the Oct. 14, 2013 deadline, the government shut down.

“American citizens felt the impact of

3. Take note of what was shut down.

National parks around the country had to close because the government would not pay to operate them. The Pentagon also partially closed, which hurt private industry because military contractors had to stop working.

Roughly 41 percent of the government’s nondefense staff also stopped working during the shutdown, which forced many important organizations to stop running. This means the FDA could not monitor food for health problems, national research centers had to shut down and the IRS stopped taking calls to help people with their taxes.

All in all, the shutdown created many inconveniences and hurt the economy.

4. Realize not everything is shut down.

While the government shutdown impacted many important programs, it did not stop everything. Many government programs fund themselves automatically and are not tied to the budget.

For example, Social Security and Medicare continued to run as normal. Essential government personal in the military, the post office and air traffic control also kept working. This helped minimize the damage a little.

5. Remember this could happen again.

After 16 days of gridlock, Congress finally came to an agreement to reopen the government. All programs started up again and America went back to business as normal.

While things are running well for now, it is important to realize another shutdown could easily happen. This most recent agreement only funds the government until Jan. 15, 2014, so another standoff could happen as soon as next year.

The government shutdown was a big problem, but Congress was able to fix things before too much damage was done.

Hopefully the government can get its act together and avoid future problems, but this is not guaranteed. By understanding how this problem came into play, you will be better prepared in case we run into this issue again.

7 Ways a Government Shutdown Can Impact Your Credit