In a nutshell — FutureAdvisor offers everyone free, long-term financial advice, even if you’re struggling with bad credit or poor personal finances. They make saving for retirement easy to understand and accessible for millions of Americans.

Savings accounts generally don’t have a high enough interest rate to be a safe retirement option, especially if you’re a low-income earner or don’t have a lot of extra money. With current rates that rarely exceed 1 percent, you’d be hard-pressed to grow your retirement nest egg and keep up with inflation at the same time.

If you’re an average working American, you can’t count on company-sponsored pensions either. Even worse, many financial advisers need you to have hundreds of thousands of dollars before they offer one-on-one advice.

So if you’re suffering from debt or recovering from a bankruptcy, what are you to do?

While former software engineer Lu grew up the son of an experienced investor himself, his colleagues at Microsoft weren’t as fortunate.

“They and all their friends [at Microsoft] were earning enough money that they could really start to save,” said Chris Nicholson, director of communications at FutureAdvisor. “They didn’t want to just sock it into a bank account where they earned almost nothing.”

Lu recommended his friends visit a financial planner — however, many of them were turned away when the advisers they sought out had $500,000 minimums.

“That’s the problem FA was founded to solve,” Nicholson said. “Normal people, Americans like you and me, who don’t have half a million dollars, who want unbiased advice on how to grow their money.”

“That’s the problem FA was founded to solve — Normal people, Americans like you and me, who don’t have half a million dollars, who want unbiased advice on how to grow their money.”

Using FutureAdvisor for the First Time

Signing up for FutureAdvisor is a simple process — just insert some basic information about yourself and link one of your existing investment accounts to the site. I connected an existing account I have with Betterment, a similar web-based investment service.

Once you link accounts, you answer a few simple questions about your retirement plans — your age, your target retirement age and how much risk you can handle.

In a matter of seconds, I was given a report card, if you will, judging my investments on four criteria — performance, diversification, fee efficiency and tax efficiency.

FutureAdvisor’s analysis of my investments. Each grade reflects how your investments compare to your risk tolerance and long-term plans.

But the tips didn’t stop there. FutureAdvisor actually compiles an “action plan” for you, recommending you buy and sell different stocks (primarily index funds and ETFs). Hover over any of the recommendations and a text bubble pops up explaining why they’ve made each suggestion. 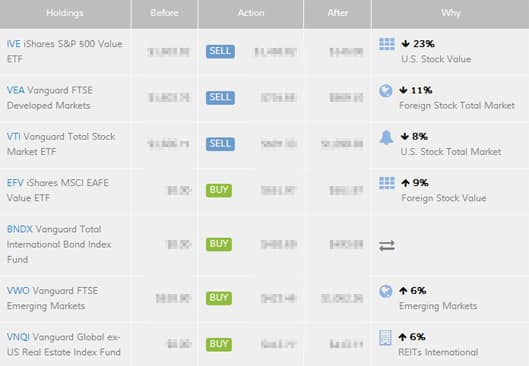 FutureAdvisor works particularly well for people with bad credit or poor financial literacy. The interface is intuitive, the features are easy to understand and best of all the investment suggestions roughly follow a “buy-and-hold” mentality, meaning you don’t have to lose sleep overnight when it comes to short-term market fluctuations.

“You don’t need experience investing to work with FutureAdvisor,” Nicholson said. “We’re like Mint for investments.”

“You don’t need experience investing to work with FutureAdvisor. We’re like Mint for investments.”

FutureAdvisor’s customer service is top-notch as well, avoiding the kind of phone-tag runaround you might get from larger corporations. 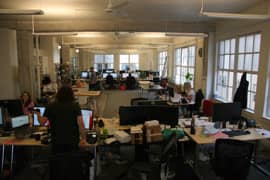 “Our client service specialists sit at a bank of desks right next to our engineers,” Nicholson said. “Whenever our customers have a frustration, one of the specialists just turns around to someone coding and say ‘look, this isn’t working for our clients’ — and we’ll change it. That really tight communication cycle actually helps us improve the product really quickly.”

While FutureAdvisor offers free algorithm-backed advice for everyone, a minimum $10,000 balance and a 0.5 percent annual management fee gets you personalized advice from an actual financial adviser.

It also sets your account on autopilot — that same team of humans will execute rebalances and trades for you.

But just because you’re not actively managing your money doesn’t mean you’re cut out of the loop entirely.

“Our approach is to communicate really thoroughly with our customers,” Nicholson said. “We’ll send weekly updates about where their account is, how their assets have grown or been allocated. … We’ll let them know we’re planning to make these sales in the coming days to rebalance their account.”

The Future of FutureAdvisor

When FutureAdvisor took their trade execution service out of beta last September, the company had around $13 million in managed assets at the time, according to Nicholson.

Nearly a year later that number reportedly hovers around $200 million. Nicholson said he expects FutureAdvisor to become “a billion-dollar company” by late 2014/early 2015.

“Things are moving really fast here,” he said. That’s not including the advice FutureAdvisor provides to 150,000 free users and their roughly $13 billion in assets.

There are rumors of big-name partnerships in the works, but Nicholson declined to reveal who’s involved. However, he did confirm a mobile app is in the works.

So long as people need financial advice and help planning for retirement, FutureAdvisor will continue developing new products to meet those needs.

5 Reasons You Need to See a Financial Counselor