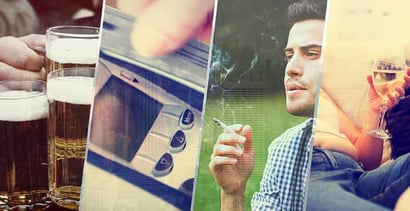 In a nutshell: Americans love to consume, but living a life of excess — especially with your finances — can lead to trouble. These 20 metropolitan areas lead the nation in overindulgence.

There are two types of people who have bad credit: those drowning in bills after an unexpected misfortune (such as job loss or medical emergency), and those who over-consume and live beyond their means.

Debt itself isn’t bad so long as it’s taken on in moderation. However, like St. Patrick’s Day, things can have good intentions until people start abusing them and pushing their limits — both physically and financially.

We culled data from the U.S. Center for Disease Control’s the credit-reporting bureau Experian to analyze four factors for 105 metropolitan areas:

After ranking metropolitan areas according to their “overindulgence” rates compared to others across the nation, we found the citizens of these 20 had considerable difficulty practicing self-restraint:

The Volstead Act in Spokane, Washington

Marcus and Narcissa Whitman laid the groundwork for Spokane in the early 1800s by setting up a medical mission in the area. Perhaps they’d be rolling in their graves to know how many of the present-day residents are living unhealthy lifestyles.

Although nearly one in three Little Rock residents might be obese (not to mention those with alcohol, tobacco, and debt problems), local initiatives such as the University of Arkansas at Little Rock’s Love Your School program are working to introduce healthier lifestyle habits to the community.

According to a 2012 study by the South Carolina Department of Health and Environmental Control, “cancer” and “diseases of the heart” were the top two leading causes of death in Charleston County. Looking at the health habits of residents of the Charleston area, we shouldn’t be too surprised.

The Bronze Boar in Toledo, Ohio

In August 2014, the city of Toledo told residents not to drink tap water after officials discovered a dangerous toxin known as microcystin, which causes damage to the liver — as if all the heavy drinking wasn’t punishment enough.

The Youngstown, Ohio area grew rapidly in the early 20th century thanks in large part to the steel and manufacturing industries. But a combination of poor urban planning and racial tensions led to its decline, making it one of “the most important devolutions in American urban history.” Perhaps disillusionment in the rusting city leads its citizens to vices and excess.

Rapid City, South Dakota has been the epicenter of the Black Hills gold jewelry trade since the 19th-century gold rush. Consider this with the CDC’s information on the area, and it appears the residents of Rapid City have a penchant for decadence.

Sioux City, Iowa has plenty of accessible outdoor recreation areas: Stone State Park, Latham Park, and the Dorothy Pecaut Nature Center, just to name a few — which makes us wonder why it has one of the highest obesity rates in the country.

Obesity, alcoholism, tobacco use, and excessive debt may be the least of Dayton’s worries — Montgomery County Sherriff Phil Plummer once called the area the “hub of Ohio for heroin” and even started the Drug-Free Coalition to help curb its resident’s addiction to vices.

Pittsburgh is one of the most popular places to celebrate St. Patrick’s day — not only because many of its residents claim Irish ancestry, but because it has the most bars per person in the country (12 per 10,000 residents).

The residents of Jacksonville, Florida aren’t the only ones living beyond their needs. Even the city government has an excessive debt problem to the tune of $1.6 billion, largely comprised of money owed to the local police and firefighters’ pension fund.

New Orleans, Louisiana after a night of revelry

To be fair, a large chunk of the people found imbibing and reveling in New Orleans on any given night probably don’t live there. However, the Dionysian habits of tourists seem to have rubbed off on the locals more than most people would like to admit.

But not all is lost — the city recently passed a sweeping smoking ban, hoping to turn New Orleans healthier.

The Salisbury University chapter of the Sigma Alpha Epsilon fraternity came under fire when the press discovered its members were forcing new pledges to drink alcohol until they nearly passed out, all while wearing women’s clothing and diapers.

The Boardwalk in Shreveport, Louisiana

Frequent tobacco-use appears to be one of Shreveport’s most troubling health problems. Luckily, local health care and university groups are taking strides to curb smoking habits and are even hosting a “National Kick Butts Day Block Party” this Thursday.

Like many cities in the south, Montgomery, Alabama has an obesity problem. However, the city and many of its neighbors have collectively shed one million pounds since 2007 thanks to the Scale Back Alabama program.

If the government is supposed to lead by example, that might explain why the citizens of Baton Rouge like to overindulge — the district attorney and public defenders offices are expected to become insolvent within the year due to unbalanced budgets.

Established in 1933, Bismarck’s Peacock Alley is the oldest bar in North Dakota.

In 2012, North Dakota became the 30th state to pass state-wide smoke-free measures after a popular vote from its residents. Despite the ban, roughly one in six Bismarck residents can’t kick their daily smoking habits.

The residents of Scranton, Pennsylvania aren’t the only ones with a debt problem. According to the state’s Auditor General Eugene DePasquale, the city (and many of its neighbors) are due to go bankrupt in the next two to four years.

Thinking about filing for bankruptcy yourself? You’d be wise to seek legal counsel first.

According to a recent WalletHub study, Mobile, Alabama had the highest obesity prevalence in the state and the ninth highest in the country — a not entirely surprising trend, considering that nine of the top 10 most obese cities in their study were located in the South.

State-wide, Montana has a relatively low obesity rate (compared to other states) of 24.3 percent — Great Falls, however, is an exception. But when your city is blanketed in snow for roughly half the year, perhaps there’s not much else to do than eat, drink and be merry.

Lafayette, Louisiana actually has an excuse for being the most over-indulgent area — they’re among the hardest-working people in the U.S. When the people aren’t busy being incredibly productive, you can find them pampering themselves at local restaurants like Randol’s and Johnson’s Boucaniere.

¹Data sources: the CDC’s most recent Behavioral Risk Factors Surveillance System Survey and Experian’s State of Credit report (2014). All four metrics were weighed equally. Certain metropolitan/micropolitan areas were omitted due to insufficient data from both sources.

Less Than 50% of Americans Know How Bad Credit Affects Them