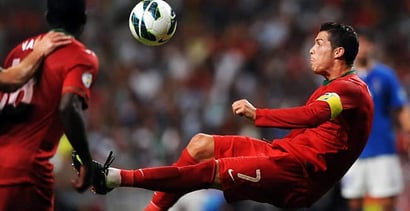 There’s no tournament quite like the World Cup — nations around the globe choose their best athletes to compete for the honor of being the Beautiful Game’s greatest team for the next four years.

Passion and pure athleticism clash for an audience of more than 3 billion. With that kind of pressure, there’s sure to be even larger sums of money-changing hands.

A recent article published by Forbes showcased the 10 highest-paid athletes in the 2014 FIFA World Cup, and we give our take here:

2014 marks Özil’s second World Cup appearance following a breakout performance in South Africa in 2010. Nicknamed “the Raven” (or der Rabe in his native Deutschland), Özil is known for his high intelligence on the field and his remarkable support for strikers.

Off the field, Özil made waves when he was picked up by Arsenal for a record £42.4 million ($72.2 million). An ongoing sponsorship with Adidas isn’t hurting his bank account either.

Gerrard is playing England’s captain for the second consecutive World Cup and is largely consider among his nation’s top footballers ever. He’s been praised for his versatility on the field, taking over as a second striker, right back and right winger when he’s not playing his typical midfield position.

Like Özil, Gerrard is no stranger to a hefty Addidas sponsorship.

Making his third consecutive World Cup appearence, Van Persie is considered one of the leading strikers in the world due to his finesse and excellent dribbling skills.

“The Flying Dutchman” (named for his memorable diving header in the 2014 World Cup) is a national treasure for the Netherlands, scoring more goals (46) for the Dutch national team than any other player ever.

Torres made headlines in 2011 when he became the most expensive Spanish player in history after securing a £50 million ($85.2 million) deal with England’s Chelsea.

With more than 25 years of soccer experience (starting at age 5), Torres is one of modern-day soccer’s most valuable players. He’s also an avid J.R.R. Tolkein fan — on his left arm is a tattoo of his name in Tengwar, a fictitious language from “Lord of the Rings.”

Making his third consecutive World Cup appearance, Touré is the only African player to make the top 10. Standing at 6 feet 3 inches, Touré has been called a “colossus” and is known for his pure physical presence and explosive sprints.

Touré currently has a fairly lucrative sponsorship through Puma but with a charitable twist, asking the sports clothing company to donate a large volume of the shoes he’s sponsoring to underprivileged children in West Africa.

Nicknamed “Kun” after the Japanese cartoon character “Kum Kum,” Agüro is making his second appearance at the World Cup after reaching the quarter-finals with Argentina in 2010. After six years with Atlético Madrid, Agüro signed with Manchester city for a rumored £35 million ($59.7 million) in 2011.

Like Torres, Agüro also shares a passion for “Lord of the Rings,” as a tattoo on his right forearm illustrates.

“Wazza,” as he’s affectionately known by his fans, is one of the most widely recognizable (and red-carded) English players of all time.

Rooney has had a slew of endorsements throughout his professional career, including Nike, Nokia, Ford, Asda, Coca-Cola and more. He also was awarded the largest sports book deal ever after HarperCollins agreed to pay him £5 million ($8.5 million) in return for five books over a 12-year period.

At age 22, Neymar da Silva Santos Júnior (or simply Neymar) is both one of the youngest and most talented players taking the pitch in Brazil during the 2014 World Cup.

He’s received critical acclaim from his nation’s legends, with Pelé calling him better than former world player of the year Lionel Messi and Ronaldinho claiming, “He will be the best in the world.”

His record speaks for itself: four-time winner of the Ballon d’Or, three European Golden Shoe awards, Olympic gold medalist and a slew of other accolades have already guaranteed him a spot in soccer’s history books — and at 26 years old, he has plenty of time left to add to those pages.

Named World Soccer Player of the Year in 2013, Ronaldo ranks as the number one highest-paid athlete in the 2014 World Cup.

Manchester United transferred him to Real Madrid in a deal worth £80 million ($132 million), making him officially the most expensive footballer in history. A combination of endorsements from Coca-Cola, Castrol, Konami, KFC and plenty more helped solidify his position at the top of the list.

And, like several other players, he’s considered one of the best in the world.