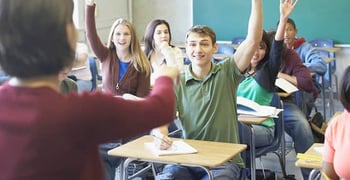 Students who complete state-mandated financial literacy courses in high school tend to have higher credit scores than those who receive no such education, according to a new study.

Written by researchers at the Federal Reserve Board and the University of Wisconsin-Madison, “State Mandated Financial Education and the Credit Behavior of Young Adults” analyzes more than 13 years of data from three states that implemented new mandatory financial literacy courses for the class of 2007.

Analyzing the credit behaviors of high school grads before and after the states implemented their new classes, the researchers found students who completed the state’s programs demonstrated more responsible borrowing and credit habits.

The study also addresses shortcomings in similar studies that didn’t appropriately measure financial literacy outcomes, according to the paper’s authors.

I spoke with J. Michael Collins, director of the Center for Financial Security at the University of Wisconsin-Madison, to explore his and his colleagues’ findings.

The researchers focused on 18- to 22-year-olds in Georgia, Idaho and Texas — three states which implemented state-mandated financial literacy courses that first measured results for the class of 2007 without making any other significant changes to their schools’ coursework.

“They all implemented some kind of change and included some preparation so the teachers could get up to speed on how to teach the required curriculum,” Collins said. “These weren’t the only three states that implemented some sort of financial education curriculum, but they did it in a way that, from a research perspective, was very clean and really systemic.”

The researchers then aggregated the credit scores of each graduating class, as well as how often students were 30 days or 90 days late on credit accounts and auto loans. They then compared the data to students who graduated before 2007 and their peers in states without any financial literacy requirements.

“We find that young people who are in school after the implementation of a financial education requirement have higher relative credit scores and lower relative delinquency rates than those in control states,” the paper reads.

“We find that young people who are in school after the implementation of a financial education requirement have higher relative credit scores and lower relative delinquency rates than those in control states.”

For the graduating class of 2007 in the study’s three key states, results were mixed: Georgia’s class of ’07 graduates only showed a marginal improvement of 0.666 points on their credit score, while ’07 graduates in Texas and Idaho actually registered lower credit scores by an average of 0.938 and 7.332 points, respectively.

However, as teachers and administrators worked out kinks in their programs, scores progressively improved in each state. By the third year of implementation, high school graduates in Georgia, Idaho and Texas were 28.71, 6.509 and 13.01, respectively. Likewise, delinquencies on credit and auto loan accounts declined across the board.

“The class of 2007 was the first class when some students were being exposed,” Collins said. “By 2009, the teachers had taught [the new curriculum] a couple times before, so they were more comfortable with the material. We actually see larger results with each year.”

Researchers also noted the challenges in measuring the success or shortcomings of financial literacy programs for young adults. For example, previous studies began analyzing data from the date a program was mandated but not necessarily when it was implemented.

“It takes years for these new education curriculum mandates to actually show up on the street,” Collins said. “The time when you decide to do something and when things get implemented are different.”

“It takes years for these new education curriculum mandates to actually show up on the street,” Collins said. “The time when you decide to do something and when things get implemented are different.”

Another inherent difficulties in studies like these, Collins said, was choosing the most effective way to measure financial literacy in young adults.

“There’s been probably 10 to 15 years of studies done on ‘financial literacy,’ and there’s still disagreement about what literacy means,” he said. “What does it mean to be financially literate at age 18 than at age 75? What’s the financial domain that counts the most for them? Probably managing credit: Credit cards, auto loans, student loans and how they engage with lines of credit.”

“What does financial literacy mean? [For young adults] it’s learning to budget and understanding financial concepts and products,” Johnson said. “Part of being financially literate is being able to understand that fine print. I always tell students don’t be afraid to ask questions.”

Despite the financial recession of 2007, financial literacy courses struggle to find time and support in many public school systems around the U.S.

“It’s not easy,” Collins said. “With the list of projects and content that could be included in the schools — obesity, fitness, gun safety, preventing violence — financial education is fighting among all these other topics for the limited time in a school day.”

Johnson also said teachers, many of whom are still recovering from the recession, may not feel confident enough in their ability to teach their students without additional training.

“There’s another challenge — how do you get students engaged in the subject in a way that’s going to stick with them, particularly in this app-based world students live in,” Johnson said. “There are a lot of financial literacy materials out there, but let’s be honest – it’s a dry subject.”

“There’s another challenge — how do you get students engaged… There are a lot of financial literacy materials out there, but let’s be honest – it’s a dry subject.”

But for the time being, those dry lessons may be doing the part to help instill responsible financial habits in the next generation.

“This study should give [other states considering financial education] a little reassurance that investing time in planning and implementation results in some positive benefits for the community and the students that come through the school,” Collins said.

Do Loans Raise Your Credit Score?