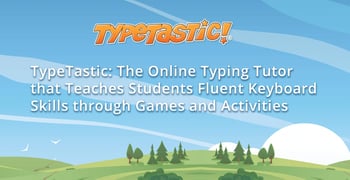 In a Nutshell: Typing is an essential skill in today’s digital world. TypeTastic helps students from kindergarten through high school learn to type with a program that uses games and activities to make typing fun. Teachers can track student progress and take advantage of the program’s convenient teacher dashboard. TypeTastic is flexible and can be used at home, whether as part of a traditional school curriculum or homeschool curriculum. The program is produced by TypingMaster, Inc. which has been creating typing software for more than 20 years.

I remember, as a child, looking at keyboards on typewriters (yes, they still had them then) and computers and seeing a jumbled mess of letters. I wondered how people could make sense of the keyboard chaos, much less type with speed and precision as I had seen many folks do.

When I was about 12, the secrets of the QWERTY keyboard were unlocked for me in a junior high typing class. As a writer, I navigate the once-confusing keyboard with ease on a daily basis (without even looking down!).

But I still see many people using the “hunt-and-peck” typing method that is so time-consuming and inefficient and wonder where I would be if it weren’t for that typing class.

I only had one year of typing, but it helped to set me up to succeed in high school, college, and beyond.

Of course, computers are more prevalent and accessible today than they were when I was in school. And thankfully, programs like TypeTastic are taking advantage of this and helping students learn to type as early as kindergarten.

“The first version started in March 2017 with just a few games. The original goal was to make the games free on our website and offer those games with possibly a few ads and some premium content,” said Sini Taskinen, Marketing Coordinator for TypingMaster, Inc., the company that produces TypeTastic.

Taskinen said it didn’t take long for teachers to begin signing up and using TypeTastic in their classrooms. Shortly after, educators started asking the company whether the program produced reports or could track student progress. They also wanted to know if TypeTastic had developed any kind of curriculum.

“That’s when we understood that we really had to do this properly,” Taskinen said.

The TypeTastic team took its small collection of typing games and turned the platform into a comprehensive educational platform with three separate curricula with games and activities aimed at students of all ages.

Taskinen said TypeTastic’s original idea — to provide fun games to help young students get familiar with the keyboard — was intended to help them transition into actual typing classes as they got older. At the time, no other programs provided these kinds of offerings, she said.

“We actually already had the typing curriculum and touch-typing courses ready,” she said. “We were just missing the beginner’s part. And when we got that, that’s when it really blew up — everybody was crazy about them.”

Today, TypeTastic consists of more than 700 typing activities for all grade levels, and is used by more than 4 million students in the U.S. and Canada.

“TypeTastic School Edition includes a fun and inspiring K-12 keyboarding curriculum along with a suite of teacher tools,” according to the company. “Watch your students embark on a thrilling island adventure to collect words and letters in bright and exciting landscapes while becoming fluent typists.”

Taskinen said it was a priority for the company to make TypeTastic a program that provides gradual progress that makes sense, building on earlier lessons.

“Most of the typing programs, they put kids to type random letter combinations. That’s not really helpful,” she said. “What we do is, after the games and moderate skills exercises, when you go into a touch-typing course, you start by learning two new keys in each lesson.”

The program quickly goes into teaching the students to type words, short sentences, and paragraphs.

“That’s what typing is — you’re typing words and not just random combinations of letters that make absolutely no sense,” Taskinen said.

TypeTastic is available as a basic, free program that offers the full curriculum. The program is also available at different pricing tiers for classrooms, schools, and school districts. The premium subscriptions are available with basic or advanced reporting options and options to integrate with programs like Office365 and Google Classroom.

Easily Accessible Resources for Students Who Are Learning from Home

Although TypeTastic was designed to be used in schools, the program is also available for use at home — whether it’s through a traditional school curriculum or part of a homeschool curriculum.

Taskinen said TypeTastic’s flexibility to be used at home became extremely important as the COVID-19 pandemic spread across North America and schools were shutting down in the U.S. and Canada.

“I can tell you that we were pretty busy in March and April,” she said. “As soon as we started hearing news that the schools in the U.S. were closing, we said ‘We really have to provide this for free for schools.’”

This was important because many schools were attempting to move other typing curricula out of the classrooms that were not designed to be delivered digitally or were not accessible outside the classroom.

“It really was amazing, the amount of people that contacted us during March and April — that was huge,” Taskinen said.

The TypeTastic School Edition remains free until the end of June.

TypeTastic also offers a homeschool edition for $59 per year for up to five students.

“We tried to set the price level so that’s not too expensive for homeschools because we get it — people have different kinds of life situations or you never know what life throws at you,” Taskinen said.

The homeschool edition comes with all of the activities that accompany the school edition and it allows a teacher to track the progress of his or her students while offering access to a teacher dashboard.

The company that created TypeTastic, TypingMaster, Inc., was launched more than 20 years ago, Taskinen said.

“The guys who founded it were schoolmates together and they just started creating a typing app which then, with the internet, started exploding around the world,” she said. “People were buying the software and they decided they could make it a full-time business.”

TypingMaster began by offering physical software packages and, like many software providers, eventually went to an online-only model.

TypingMaster, which produces TypeTastic, has been designing typing software for more than 20 years.

“We’ve done different types of platforms over the years and Typetastic is the latest incarnation of the software,” Taskinen said.

TypingMaster is composed of a team of keyboarding enthusiasts, developers, designers, and creators. The company is based in Helsinki, Finland and maintains a sales office in Grand Junction, Colorado.

“In addition to TypeTastic, our other products include TypingTest.com, the number one website to test typing skills, Typing Games Zone, a leading website for fun typing games, and a typing race game, TypeRush,” according to the TypingMaster website.

“TypingMaster 10 for Windows is a complete touch-typing tutor application with a real-time analysis widget. Meter analyses your typing skills and creates tailored exercises,” according to the company website.

It also produces TypingTestPro for employers.

“Take the easy way to assess job applicants’ text entry skills and view summary reports with Typing Test Pro,” according to the company. “Test drive our easy-to-use, quick, and customizable web-based wpm testing tool for all your business recruitment and training purposes.”

Taskinen said the folks at TypingMaster are always working to improve TypeTastic and add new features to the platform.

“We have a long list of features and improvements we want to add to TypeTastic, in this business development never stops,” she said.

Credit Saint vs. Lexington Law: Which Is Best?
Published On: 9/1/21
more guides »