The Grassroot Institute of Hawaii Shines a Light on Key Issues, Including How Taxes and a High Cost of Living are Prompting Residents to Leave the State 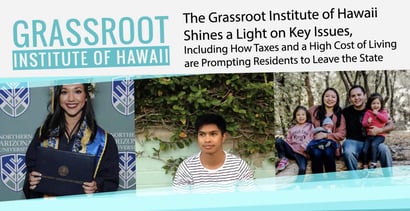 In a Nutshell: Despite Hawaii being one of the most beautiful states, it has increasingly seen its residents leaving the islands in recent years for opportunities elsewhere. The Grassroot Institute of Hawaii shines a light on this issue by exploring the reasons behind the exodus and offering solutions to the problem. The institute has identified the lack of job opportunities and the extremely high cost of living as two of the main contributing factors to the decision to leave the state. The think tank recommends loosening the tight land use laws to create more affordable housing, and lowering taxes to motivate people to stay on the islands. It addresses other pressing issues facing Hawaii, as well, including the long-running Jones Act and the Honolulu Rail system.

Most Americans who live on the mainland think of Hawaii as an island paradise. With picture-perfect tropical beaches, majestic volcanoes, and beautiful weather, residents of Hawaii may forgive us for that assumption.

But the truth is the state faces a number of economic, employment, and other ongoing issues (some of which are unique to Hawaii) that are resulting in residents leaving the islands for less scenic, but more amenable, places to live.

The Grassroot Institute of Hawaii recently highlighted the issue by launching “Why We Left Hawaii,” a series of stories that explores the reasons why the islanders are seeking residency elsewhere.

The topic is just one of many that the nonprofit think tank seeks to draw attention to. But the recent exodus is one of the most pressing concerns because so many other issues are tied to it, including the fact that Hawaii has the highest cost of living of all 50 states and housing is becoming unaffordable for many residents.

We recently spoke with Joe Kent, Executive Vice President of the Grassroot Institute of Hawaii, to learn more about these important issues, how the institute works, and what can be done to bring Hawaii a little bit closer to the paradise many of us imagine it to be.

“The Grassroot Institute of Hawaii is a nonprofit, public policy think tank that seeks to educate people about the values of individual liberty, economic freedom, and accountable government,” according to the organization’s website.

As one reads through the stories featured in the “Why We Left Hawaii” series, one theme quickly becomes evident — the extremely high cost of living. The details vary, but at the heart of most of the narrative is a tale of how the state is too expensive to live comfortably in.

The Grassroot Institute of Hawaii, using data from the U.S. Census Bureau, reported the population of urban Honolulu declined in 2017 and 2018 to hit its current number of 347,397. That’s 1.3% lower than the 2016 population.

In addition to hard data, Kent said the institute has heard feedback from many Hawaii residents in recent years that goes beyond the numbers and reveals the struggles residents are facing.

“A lot of it has to do with the cost of living and job opportunities,” he said. “People just have trouble getting a good job. There are jobs but a lot of them are just part-time work. And there isn’t really a tech industry to speak of.”

The tourism and real estate industries comprise the majority of job opportunities, he said, but for people who aren’t in those industries, employment prospects are often bleak.

The Grassroot Institute of Hawaii’s “Why We Left Hawaii” series explores the stories of individuals and families who have left the state for opportunities elsewhere.

“There are big communities of former Hawaii residents in Nevada, California, Washington, and Texas — areas with better opportunities, lower taxes, and a lower cost of living,” Kent said.

He also said that, even though the Hawaii residents’ exodus cuts across all age groups, millennials and the younger generations seem to be leaving faster than anybody because of the lack of job opportunities and high cost of living.

A major contributing factor to the high cost of living in Hawaii is the price of real estate, Kent said.

He said the small percentage allotted for urban development is not enough because, even when affordable housing solutions are proposed, they often die before they can become a reality because of the strict zoning and land use issues.

Another underlying contributor to Hawaii’s high cost of living is the Jones Act. Enacted in 1920, the act places certain regulations on cargo ships delivering goods to Hawaii that result in much higher prices for everyday items. Kent said repeated tax increases over the years also add up to very high prices.

Kent explained some of the ways the Grassroot Institute of Hawaii is working to address the state’s diminishing population and make living in Hawaii easier.

One of the main changes the institute would like to see addressed is the strict land use laws.

“What we’re saying is the state should open up the amount of zoned land for affordable housing from 5% to 6%,” Kent said. “By doing so, you would increase the amount of housing stock by 20% which seems reasonable.”

The institute proposes lowering Hawaii’s increasing taxes as a way to keep residents in the state.

“We certainly want to preserve the beauty and nature of our islands,” Kent said. “That is our biggest asset. At the same time, if you look across the islands, there are a lot of fallow fields.”

Regarding taxes, Kent said the small increases over the years has built up to “a death by 1,000 cuts type situation.” He said the state has the second-highest top marginal income tax rate and the highest sales tax burden in the nation.

“We’re kind of in a spiral of increasing spending, increasing taxes, and increasing the cost of living, whereas the tax base is leaving the islands,” he said. “We just don’t want to keep on spiraling.”

“High levels of taxation limit freedom of choice for taxpayers, discourage investment by entrepreneurs, and raise the cost of living and doing business for all,” according to the institute’s website.

Kent mentioned the Jones Act as a contributor to the high cost of living in Hawaii today. But the nearly 100-year-old act has long been an issue for the state and is one of the main motivations behind the launch of the Grassroot Institute of Hawaii.

“It’s a shipping law that makes everything in Hawaii more expensive,” Kent said. “It protects American shippers and basically says that, if you want to pick up goods from one U.S. port bound for another U.S. port, it has to be on a ship built in America, owned by Americans, crewed by Americans, and fly the American flag.”

Joe Kent is the Executive Vice President of the nonprofit, Grassroot Institute of Hawaii.

“At the Grassroot Institute of Hawaii, we believe our state must shake off some remnants of its past to move forward,” according to the institute’s website. “The Jones Act cripples our economy, restricts our ability to acquire goods, contributes to our ongoing energy crisis and adds perhaps a third to our local costs.”

The institute also addresses other issues of government accountability, economic freedom, and individual liberty in Hawaii. Another of these issues is the Honolulu Rail project.

“The over-budget, behind-schedule rail project of the Honolulu Authority for Rapid Transportation (HART) has been rife with mismanagement and abuse of its taxpayer funding,” according to the institute. “In response, the Grassroot Institute of Hawaii has been promoting a campaign to ‘Audit The Rail,’ so as to hold government officials accountable and make sure that taxpayers’ dollars are being spent wisely and efficiently.”

Other key policy areas the organization focuses on include pension reform and privatization issues.

Overall, the Grassroot Institute of Hawaii is standing up for the state and its citizens by looking for ways to improve the quality of life and make Hawaii a place people want to live, not just visit.