The Institute for Economics and Peace, and How Its Work Sheds Light on Spending, Saving, and Debt 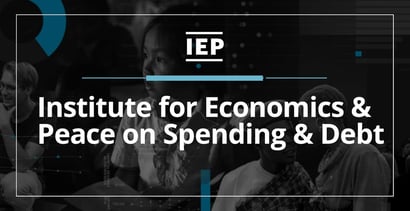 In a Nutshell: The Institute for Economics and Peace aims to change how the world thinks about peace. Its philosophy of economics and peace proposes that peaceful societies are often the most financially sound. The institute conducts an array of research exploring the intersections of conflict, peace, finance, and economies. While conflict may cause profits in the short-term, peace is more profitable in the end. The institute’s data-driven research demonstrates this and is used by policymakers and governments around the world. Here at BadCredit, we’re often focused on how individuals can manage their finances and pay down debt, but sometimes it’s valuable to take a step back and look at big-picture research conducted by organizations like the IEP.

The economic well-being of individuals in a society depends on so many factors it can be hard to keep track of them all. But one organization has chosen to focus on a consideration that it believes goes a long way toward economic stability: peace.

“The Institute for Economics and Peace (IEP) aims to create a paradigm shift in the way the world thinks about peace,” according to the organization. “We do this by developing global and national indices, calculating the economic cost of violence, analyzing country-level risk and fragility, and understanding Positive Peace.”

Senior Research Fellow Thomas Morgan said the Institute for Economics and Peace was founded in 2008 by Steve Killelea, a successful IT entrepreneur before he entered the world of philanthropy and made some interesting observations that led to him creating the IEP.

But Killelea found that, in the process of implementing development projects, the efforts would often be interrupted by violence and conflict, Morgan explained. When a nation is embroiled in conflict, considerations like credit and debt tend to fall by the wayside. And of course, residents in underdeveloped countries are often unbanked and don’t deal with debt issues in the same way at all.

“This is what got him thinking about ‘Okay, so what are the most peaceful countries in the world? What do they have in common? How does this affect their economic output?’ and so on.”

These are macro-level questions and considerations, but exploring finance through this lens also speaks to how governments and individuals prioritize funds, access credit, and handle debt.

The Philosophy of the Economics of Peace

Here in the U.S., it’s no secret that maintaining conflict helps to line the pockets of the powerful and influences policy decisions. But the Institute for Economics and Peace offers a different point of view, backed by sound research.

“I think the conceptual starting point for studying the economics of peace is to think about what it will be like in a world completely without violence, starting with a utopian concept and thinking about what the opportunity cost of that would be — thinking about all the resources now that go into violence, but also preventing violence,” Morgan explained.

Thomas Morgan is a Senior Research Fellow at the Institute for Economics and Peace.

This line of thinking isn’t just about military spending, he said. It’s also about looking at the impact of interpersonal violence and people’s responses to that, including security spending at the personal, local, regional, and global levels.

“There are really two aspects to it,” Morgan said. “There’s the economic impact of different types of violence, which forms the basis of the ‘Economic Value of Peace‘ paper.”

This paper employs the IEP’s innovative methodology to calculate the economic impact of violence on an economy. The methodology calculates “13 different types of violence related to spending on the national level and applying a multiplier effect for the lingering influence of violence and fear.”

“There are immediate and obvious examples of the impact of violence to the economy, like hospital fees, or security costs, and there are also more subtle long term impacts, such as a shift to more defensive spending by individuals, businesses and governments,” according to the organization.

Morgan said the other aspect is thinking about what kind of industries might flourish if violence were eliminated and its funding were transferred into other areas. And what would the impact be of a peace industry.

“Peace is much more than the absence of violence. Positive Peace describes the attitudes, structures and institutions that underpin and sustain peaceful societies,” according to the organization. “The Institute has developed a conceptual framework, known as the Pillars of Peace, that outlines a system of eight factors that work together to build positive peace.”

The Pillars of Peace provide a road map to overcome adversity and conflict, and move toward building an everlasting peace.

The Institute for Economics and Peace believes that data and fact-based research are the first steps in creating a more peaceful future for the world.

“If you look at basically any country that goes into a major conflict, and you look at the GDP growth over time, you find the GDP goes up,” Morgan said. “Then there’s this huge dip in the GDP, and it recovers — usually to the same growth rate. But because of that conflict, there’s always this gap between where the total level of economic activity would have been without the conflict.”

This is an example of the types of research and data-driven findings the IEP publishes for the benefit of countries around the world.

The IEP’s annual Global Peace Index ranks 163 countries according to their level of peace.

This only accounts for countries where this kind of data is available, Bardwell added. The IEP believes that if it could factor in data from every country, the growth rate would likely be below 2%

“Through rigorous quantitative and qualitative analysis, in depth reports and convening of global experts for innovative discussions, the Institute for Economics and Peace is impacting traditional thinking on matters of security, defence and development,” according to the organization.

The institute’s data-driven research has made real and meaningful differences around the world.

“The philanthropic funding that enabled the creation of IEP was recognized as one of the 50 most impactful philanthropic gifts in Australia’s history by a coalition of Australian Foundations,” according to the IEP.

“Our research is used extensively by governments, academic institutions, think tanks, nongovernmental organizations and by intergovernmental institutions such as the OECD, The Commonwealth Secretariat, the World Bank, and the United Nations,” according to the IEP.

With its headquarters in Sydney, the Institute for Economics and Peace maintains offices in six countries. It’s research sees more than 20 billion media impressions across 150 countries each year.

“I think because the focus of the research tends to be at the macro level, it’s more about government and policymakers and getting them to think about the trade-offs involved in this kind of spending,” Morgan said.

Businesses as well as individuals can also benefit from the IEP’s research by considering the impact of violence on the business environment. But it’s important for the policymakers to get on board to make the systemic changes necessary to really make a difference.

The IEP publishes an array of valuable research each year, including the Global Peace Index and the Global Terrorism Index, that can help guide governments and policymakers.

On the other hand, the latest Global Terrorism Index found that deaths from terrorism reached a five-year low, but new risks have emerged.

“We’ve seen a big reduction in the level of terrorism worldwide, but also a large increase in active ISIS activity in Sub-Saharan Africa,” Morgan said. “It’s almost completely moved out of the Middle East and North Africa now. And then there’s also a little bit talking about the rise of political violence in the U.S. and Western Europe with a special emphasis on the increase in the far right.”

Suffice it to say, the Institute for Economics and Peace are doing valuable and important work. And, here at BadCredit, we’re often focused on how individuals manage finances, credit, and debt, sometimes it can be valuable to take a step back and look at the processes that influence the systems we live in.