SoloSuit: A Free App that Automates Debt Lawsuit Responses and Lowers the Cost of Seeking Justice 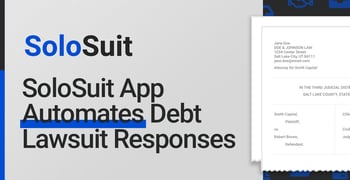 In a Nutshell: Each year, more than 10 million Americans get sued over outstanding debts. And about 9 million of those people lose their cases by default due to the system’s complexity and tight response times. SoloSuit is a free web app that can help users respond to questions about their case, and the platform generates an answer document and instructions on how to file it with a court. SoloSuit automates the filing process, communicates status updates, and even offers an attorney review. The platform has helped thousands of users successfully defend themselves from debt collection lawsuits and save millions of dollars.

According to recent research, fewer than 10% of defendants in debt collection lawsuits are represented by a lawyer. And debt claims now comprise at least 25% of civil cases in U.S. state courts — up from about 1 in 9 cases in the early 1990s.

The caseload increase reflects the widening access to credit and rising student loan debt. Also contributing to the growth in debt collection lawsuits is the dislocation caused by events including the financial downturn of 2007 and 2008 and 2020’s COVID pandemic.

But those external factors don’t explain why so many debt lawsuit defendants lack representation. The fact is that they probably can’t afford it. Debt cases, like many legal proceedings, are complex and require expertise that most defendants do not have on their own.

That’s not the case on the plaintiff’s side, however. Companies in the multibillion-dollar debt industry have well-paid lawyers whose mission is to earn profits for their employers.

For a recent cohort of students at the Brigham Young University J. Reuben Clark Law School in Utah, that David-and-Goliath asymmetry didn’t sit well. With the help of a professor, they set out to develop SoloSuit, an app that helps level the debt collection playing field.

SoloSuit is like a TurboTax for debt lawsuits. Its free web app helps defendants organize a response to a summons and complaint within 15 minutes.

That automation allows overwhelmed consumers to address litigation quickly and even sets them up for ultimate success in their cases. Courts have dismissed about half of the cases submitted by people using SoloSuit.

Simons was part of the team of students participating in BYU’s LawX legal design clinic that began looking at debt collection in Utah in 2017. What they found inspired them to start working on a solution.

In early 2018, the group launched an academic version of SoloSuit. The school then granted Simons ownership of the project, and in September 2020, a commercial version of SoloSuit went live. Now, SoloSuit is able to generate answer documents in 50 states.

“We scanned a dataset compiled by the Utah court system and found that debt collection was the largest category of cases in the state,” Simons said. “We also found that in around 90% of cases, the defendant didn’t have an attorney, but the plaintiff did.”

In that situation, Simons said there is a profound power imbalance as enormous debt collection corporations are suing unrepresented individuals.

“People lose by default because they can’t figure out how and when to respond to the lawsuit,” he said.

First, the LawX students envisioned creating a mechanism to marshal pro bono representation on behalf of all cases. After they did the math, they found that such a solution wasn’t scalable.

“There’s been good research done that found that every attorney in the U.S. would have to provide 900 hours in free services to accommodate all of the legal needs currently unserved by attorneys,” Simons said. “So we decided to go with platform technology — a free software that gives everyone a chance to be heard in court, and that makes seeking justice a whole lot cheaper.”

Automation enables the SoloSuit solution, Simons said. The debt industry is predicated on the complexities and costs associated with answering a summons or complaint, leading the vast majority of defendants to abandon their cases before they even start.

Every state court has its own filing procedures, and many states require defendants to respond within as little as 21 days. That means defendants must interpret all of the ambiguous language in the summons or complaint and fill in all the blanks.

“It’s incredibly difficult to file an answer document in court,” Simons said. “Even if you manage to produce the document, the worst part of the battle is still ahead of you.”

SoloSuit offers a free tier that helps defendants compile a printable version of the answer document. It also has standard and premium services that automate the filing process and can even provide a document review by an attorney.

“The summons tells the consumer they’re being sued, and the complaint tells them why, but neither tells them how to respond,” Simons said.

“You’d think that would be easy, but it’s extremely hard to find out what court your lawsuit’s in,” Simons said. “And even if you’re able to find an address online, it’s usually only the physical address, so then you have to call the court. And the clerks are sometimes not very pleasant to defendants who don’t know the lingo for navigating the system.”

One customer who recently sought SoloSuit’s help found the process easy and intuitive, just how its founders designed it.

“First time getting sued by a debt collector and their attorney and I was searching all over YouTube and ran across SoloSuit and their services so I decided to buy their services with their attorney reviewed documentation which cost extra but was it well worth it,” said the client in an online testimonial. “SoloSuit sent the documentation to the parties and to the court which saved me time from having to go to court and in a few weeks the case got dismissed!”

SoloSuit has accomplished much of what it set out to do when it was launched in 2018. But the company plans to do more to help people overcome the burden of debt.

Next, SoloSuit wants to start determining if there are any fees associated with filing answer documents. There usually are, and to pay, the defendant must mail a money order or cashier’s check.

“You might not owe the debt, and it might not even be yours, but you have to pay just to have your case heard,” Simons said.

Research from the U.S. Consumer Financial Protection Bureau indicates that 50% of debt collection lawsuit defendants say they’re being sued for a debt they don’t owe. Simons noted that SoloSuit’s 50% case dismissal rate is a result of the app’s ability to see people through the completion of the filing process.

When the court receives a response, plaintiffs will typically move on to the next defendant.

“One of our customers was sued for a credit card debt of thousands of dollars that he said must have been the result of fraud or erroneous debt collection,” Simons said. “He used our service in New York, had an attorney review the answer document, and filed the form. About a month later, his case was dismissed. That was a big win.”

SoloSuit offers a 100% money-back guarantee if the court does not accept an answer document. And it is poised to expand its role as a provider of affordable legal services for people facing debt collection lawsuits. And SoloSuit will be especially helpful for those whose personal finances have been affected by the COVID-19 pandemic.

“It’s still a few months out before we anticipate seeing lawsuits coming due because of the pandemic,” Simons said. “But we expect there’s going to be a tidal wave of debt collection, and SoloSuit wants to be the hero that American consumers need.”