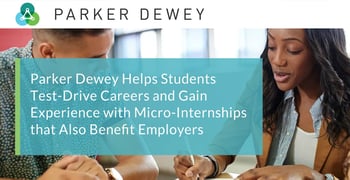 In a Nutshell: Finding a good job after college can be extremely challenging. Lack of experience, middling GPAs, and a host of other factors can cause employable candidates to be filtered out of the applicant pool. Parker Dewey is helping students solve these problems through micro-internships that provide students with valuable experience and companies with the help they need. The micro-internships also allow students to explore different types of jobs and potential career paths. Meanwhile, companies get a chance to test-drive summer internships or full-time employment candidates and avoid the costly exercise of hiring people who aren’t a good fit for the company or leave within the first year.

Transitioning from college into a career can come with all kinds of challenges.

Recent grads lack real-world experience so they may struggle to get their foot in the door of their chosen field. Or financial issues may hold them back from pursuing the job of their dreams. The reasons for not getting into the job of their choice after graduation go on and on.

Several years ago, a graduate of Chicago’s Roosevelt University was not having any luck when it came to finding an opportunity to use her accounting degree. Instead of crunching numbers and establishing her career, the graduate was working as a barista.

The young woman worked full time during college so her GPA was not as high as those of other graduates who were able to focus solely on their studies. As a result, she was being filtered out of the applicant pool for professional jobs.

But things changed with the help of the innovative micro-internship platform that Parker Dewey offers.

“A company in Chicago called M. Holland — a multibillion-dollar industrial company — needed immediate help on an accounting project,” said Jeffrey Moss, Founder and CEO of Parker Dewey. “They posted a micro-internship and picked this graduate, and she was amazing.”

The accounting graduate has been working at M. Holland full time for three years now, he said.

“In the words of the head of HR, ‘This is someone who we probably wouldn’t have otherwise found. We weren’t recruiting at her school, and we probably would have filtered her out based on GPA,’” Moss said.

But thanks to the micro-internship, M. Holland was willing to give the graduate a chance because it saved the company the expense of having to hire and train a new, full-time employee — that is until they realized she was a great asset to the company.

And for the graduate, the micro-internship allowed her to get her foot in the door with a company she otherwise would not have had an opportunity to work with.

Parker Dewey has been helping students, recent graduates, and employers make these valuable connections for the past five years to the benefit of all parties involved.

Moss said he founded Parker Dewey after observing how unfair the college-to-career transition could be for some people.

“If you didn’t have the quote-unquote right academic pedigree — the right school, major, GPA, family connections — it was hard to land that summer internship and that full-time role,” he said. “They were getting filtered out based on things that weren’t necessarily predictive of whether you would be a good employee.”

Jeffrey Moss is the Founder and CEO of Parker Dewey.

Another problem Moss identified in this realm was that, even for students who have the preferred qualifications, they often don’t actually get to test the waters in different careers before having to choose a path.

“There are so few opportunities for career exploration before you graduate,” he said. “You take that summer internship, and it gives you one data point. Maybe you have two internships — you have two data points but nothing else to compare them to.”

This also led Moss to think about how the growing gig economy is portrayed.

“So much of the gig economy messaging is that you either have a gig or a job, and that’s it,” he said. “You can be a perpetual gigger and never go into an office, or maybe it’s about a side gig where you want to earn some extra money.”

But Moss said he saw an opportunity to rethink the gig economy approach. It’s great for a college student to work a gig and get paid, he said, but 10 gigs in a particular area can become a pathway to discover the right job.

With Parker Dewey, college students can work on five, 10, or even 20 micro-internships during their degree program and earn money and gain experience.

This approach essentially uses the gig economy as a springboard into a professional career.

“Projects on Parker Dewey come from a variety of industries and disciplines,” according to the company. “From working directly with an entrepreneur to supporting a large enterprise, you’ll have the opportunity to explore different roles and company cultures.”

Assignments can vary broadly, ranging from copywriting and working in social media to sales projects and lead generation. And every micro-internship comes with fair compensation and is paid per project.

Not only can college students and recent graduates have a chance to get their foot in the door, demonstrate their skills, and explore career paths, but they can do it all while earning money.

Parker Dewey makes it easy for college students and recent grads to create a profile and begin exploring micro-internship opportunities.

“If I’m a student, all of a sudden I’m building my resumé,” Moss said. “I have all these great experiences I can use to highlight to an employer why they should hire me.”

And by exploring different paths, they can find out firsthand what jobs and types of companies are most appealing to them.

Micro-internships are available all year round, and it only takes about 10 minutes to sign up for Parker Dewey’s services. Students simply provide some basic information, including your name, school, hobbies, and a few more details, and then they can gain access to the platform’s available micro-internships.

Once the student identifies an appealing micro-internship he or she will apply for it and wait to hear if they were selected by the company.

“Once you’re selected, work directly with the company,” according to Parker Dewey. “Do your best to exceed their expectations as it could lead to a full-time role.”

“On the company side, we recognized that they were feeling the pain too,” Moss said. “About 55% of new hires leave within the first year, (the companies) are all competing for the same candidates in the same schools, and they bring in people only to realize the fit is not right.”

At the same time, Parker Dewey saw that companies were increasingly recognizing that individuals outside the company can provide help on discrete projects, Moss said.

“I’m not talking about driving an Uber or walking my dog, but real, professional projects that may not be the best use of time for a busy professional with 10 or 20 years of experience,” he said. “But for a college student or recent grads, these projects would be great.”

With Parker Dewey’s fresh take on internships, companies are able to get immediate support on important projects, Moss said, and identify and test drive prospective candidates for summer internships and full-time roles.

“Leverage our network of more than 200 partner schools and a total network reach of more than 11 million degree earners nationwide to audition candidates via micro-internships,” according to the company. “You’ll see candidates in action and get feedback directly from hiring managers to collaboratively decide on next steps.”

Moss said Parker Dewey’s micro-internship platform has found nearly universal success among companies that use it.

Moss said he believes this is because every professional has “I should” and “I shouldn’t” projects — things they don’t have time for or are not the best use of their time.

The Roosevelt University graduate is just one of the hundreds of success stories made possible through Parker Dewey’s micro-internships.

“We’re keeping our heads down just trying to help as many college students and recent grads as possible right now,” he said.