Recognizing the Hartford Region for Its Diversity of Opportunities Across a Number of Industries, Including Insurance and Manufacturing 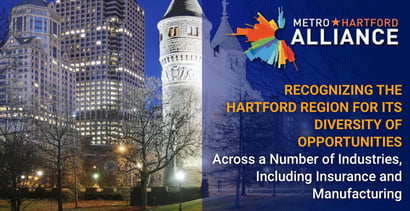 In a Nutshell: Hartford, Connecticut’s history predates that of the United States, but the capital city is still innovating and evolving after almost 400 years. Hartford is the insurance capital of the world, but the manufacturing industry also maintains a huge presence in the area. In fact, Hartford is the largest producer of jet engines. And the MetroHartford Alliance, which is the combination of the chamber of commerce and local economic development group, continues to spearhead initiatives to attract more business to the area and make sure the businesses that are there are well taken care of. Hartford was also recently named as one of the top cities in the U.S. to raise a family without going broke, and a top metro for millennials.

Mark Twain called Hartford chief of all the beautiful towns he had seen in America. By the time Twain wrote this passage in 1868, the capital of Connecticut had been founded more than 230 years prior.

Hartford is home to the nation’s longest-running newspaper and the oldest publicly funded art museum, and it is one of six U.S. cities highlighted in the Smithsonian Institute as a place of innovation. It’s safe to say that Hartford’s place in the history of America is well-established.

But Hartford and its surrounding metro area are not old news. Nearly 400 years after the city was founded, the Hartford metropolitan area is making waves for its bustling labor market and job opportunities among other accolades that make a strong case for many to call Hartford home.

We recently spoke with David Griggs, the President and CEO of the MetroHartford Alliance, to learn more about the region’s growth, job opportunities, and diverse industries for which the city is known.

In the local efforts, Griggs said the organization makes sure that the companies and industries that call the Hartford area home are well looked after. And in its broader efforts, the MetroHartford Alliance works to develop and maintain Hartford’s identity and tell the world about the region.

“In either case, understanding who we are as a region is key,” Griggs said.

A Leader in the Insurance, Manufacturing, and Tech Sectors

Griggs said Hartford excels in both white-collar and blue-collar industries.

“We’re the insurance capital of the world — we’ve got 42,000 jobs in that industry,” he said. “While, at the same time, we are the nation’s leading producer of jet engines for commercial and military applications, with 20,000 jobs in our aerospace sector.”

Both of those industries have a very high average wage and a very high economic output, Griggs said.

“For our region, it creates a situation where we really do hit above our weight class when it comes to things like GDP, exporting — all the things that bring new money into a community,” he said.

He said Hartford is a who’s who of the insurance industry — Aetna, The Hartford, Cigna, and Hartford Steam Boiler are among the 20 headquartered in the Hartford region. Insurers with a major presence include Travelers, Prudential Financial, United Healthcare, and Lincoln Financial.

“A lot of companies — even if they’re not headquartered here — the insurance side of their business will actually be licensed here in Connecticut,” Griggs said. “That’s because the system that we have for insurance, and how insurance is regulated, is very progressive here.”

Hartford is the insurance capital of the world and is also known for its strong manufacturing industry.

Hartford’s manufacturing roots go back to 1850 with the opening of the Colt firearms factory. In the coming decades, numerous other manufacturers set up shop or moved to Hartford.

Griggs said that, although Henry Ford is credited with inventing the assembly line, he actually visited the Colt Manufacturing Company to learn how to build things with interchangeable parts on a conveyor belt.

Griggs said Pratt & Whitney, one of the largest jet engine manufacturers, is located in East Hartford. Major manufacturers headquartered in the region include United Technologies Corporation, Stanley Black & Decker, and OTIS Elevator. General Dynamics Electric Boat company, which is the supplier of submarines to the U.S. Navy, is just outside the Hartford area, he said.

“The aerospace and defense industries in the Hartford Region are very, very strong,” Griggs said.

He said the tech sector also maintains a formidable presence in the greater Hartford area.

“Everything we do has a foot in the technology sector,” Griggs said. “In the aerospace sector, we’re starting to see additive manufacturing and industry 4.0 really being established. And Stanley Black & Decker has a facility in downtown Hartford where they can literally monitor every machine in every factory they own in North America.”

He said this allows the company to address any issue they may have on a manufacturing floor in real time.

With its mission of recruiting businesses to the Hartford region, developing a dynamic urban core, attracting and retaining talent, and advocating for the needs of area businesses, the MetroHartford Alliance spearheads a wide variety of initiatives.

Of particular interest to tech-savvy entrepreneurs and other startups may be the Innovation Destination: Hartford project.

“Innovation Destination: Hartford (IDH) represents a coalition of entrepreneurs and service professions dedicated to enhancing the Hartford region’s ability to support startups and second-stage entrepreneurs,” according to the IDH website.

David Griggs, the President and CEO of the MetroHartford Alliance, stands on Pratt Street. Photo by Allegra Anderson Photography.

The Alliance has made the retainment of young talent a priority for over 13 years with its Hartford Young Professionals and Entrepreneurs group (HYPE), which helps young entrepreneurs become aware of and utilize the resources the region has to offer. By recently adding talent attraction to its efforts, HYPE and the Alliance are committed to cultivating the next generation of Hartford industry leaders.

Connecticut Insurance and Financial Services (CT IFS) is another initiative that provides a system of corporate, education, and government collaboration to support the insurance and financial industries.

“The system enhances the competitive strength of each IFS company, increases the employment opportunities, expands workforce diversity in the sector and develops a pool of qualified and experienced employees in the Hartford Region and Connecticut overall,” according to the MetroHartford Alliance website.

The MetroHartford Alliance also leads the Women’s Leadership Initiative, which lays the foundation for a collaborative network of women entrepreneurs and leaders.

“Women leaders of all experience levels from a wide variety of industries are able to connect with each other at various MetroHartford Alliance events and programs,” according to the website. “Exclusive invitation-only opportunities designed specifically for professional women from our investor businesses, institutions and organizations are held throughout the year.”

Other Reasons to Move to Hartford Include Safety, Affordability, and a Highly Educated Population

“Because of our lower costs, our safety, and low crime, we become a very attractive market for a growing family,” Griggs said. “You have one kid and you’re living in Manhattan or Brooklyn, you can manage it for a while. But as soon as you have a second one, you might start thinking about school systems. This is when the Hartford Region bubbles to the top of the list pretty quickly.”

In fact, Realtor.com recently ranked Hartford in fifth place on its list of “America’s 10 Best Places to Raise a Family — Without Going Broke.”

“Aside from the plentiful gigs for the ‘rents — not just all of those actuarial tables, but also tech startups, Fortune 500 firms, and even the headquarters of ESPN in nearby Bristol — there are lovely parks and great museums here. It’s no wonder the number of young families is rising fast,” according to Realtor.com.

The article also points out that many of Hartford’s suburbs are consistently ranked among the top places to live in Connecticut.

“We’ve been noted a few times by influencers for offering the desirable combination of affordable housing with a high quality of life and high wages,” Griggs said.

Griggs said Hartford also sits in the Knowledge Corridor that features a wealth of colleges and universities, and its education system and K through 12 schools are consistently ranked among the best in the nation.

“Because of our proximity to New York, a lot of plays are developed here,” he said. “They start here and then end up on Broadway, which is something that Hartford has been very proud of.”

He said the Hartford Stage and the Bushnell Center for the Performing Arts are two of the city’s leading theaters.

With its diverse industries, quality education options, affordability, and low crime rates, the Hartford metropolitan area is certainly worth considering for businesses, individuals and young families looking for a place to call home.