10M+ Satisfied Customers: How OneMain Financial Has Been Making a Difference for Hard-Working Borrowers for Over 100 Years 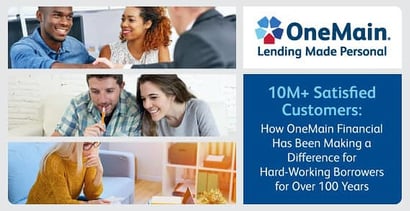 In a Nutshell: A tree’s root system grows throughout its life, often growing as large, if not larger, than even its crown. A tree that has lived for 100 years will have a wide, elaborate root system making it a solid part of its home. In the same way, OneMain Financial has been growing as a part of American communities for over 100 years, putting down roots in 44 states and more than 1,700 neighborhood locations. Today, OneMain helps hard-working borrowers weather life’s storms by offering secured and unsecured personal loans, when they’re needed, including auto loans that allow borrowers to take equity out on their cars. The one-on-one process is supported with a wealth of online resources to help borrowers learn good financial habits. For more than a century, OneMain’s goal has been to help improve the financial well-being of their customers — and communities.

Though it’s probably safe to say that most of us have an intrinsic understanding of the concept of economic inflation — we all certainly realize that stuff is more expensive now than it was 50 or 100 years ago — seeing the hard numbers can still be surprising. For instance, that $6 pound of bacon you cooked for breakfast would have run you just $0.24 in 1912.

Another amazing example, were you to purchase a brand new Ford car today, you’d expect to pay upwards of $13,000 to drive even the most basic model off the lot. For your great-grandparents in 1912, however, a top-of-the-line Ford Town Car was a cool $800 (an increase of 1,625%). Even more shocking? The cost to fill up your new purchase; that 1912 automobile could be filled at the local petrol station for only $0.07 a gallon — 3% of the average $2.30 a gallon we pay today.

Jay Levine is the President and CEO of national lender OneMain Financial.

Obviously, a great many changes have occurred in America since 1912 that go well beyond inflation, as well — such as the establishment of the Federal Reserve in late 1913, which changed banking on a national scale. Four new states (New Mexico and Arizona in 1912; Alaska and Hawaii in 1959) were added. Women gained the right to vote and later emerged into the workforce. And, of course, the U.S. population has more than tripled in size, from not quite 100 million people, to over 320 million.

Watching the changes of the last century unfold, as well as experiencing a few of its own, has been OneMain Financial. Established in Baltimore, Maryland, in 1912, the lending company originally called Consumer Credit spent some time as CitiFinancial before being renamed OneMain Financial and, later, merged with Springleaf to form today’s $12 billion national consumer lending company.

“In November 2015, Springleaf acquired OneMain Financial from Citi — and more than doubled the size of the company,” described David Hogan, Executive Vice President of Risk Analytics and Marketing for OneMain. “The two companies were remarkably similar prior to the acquisition, and both served pretty much the same customer set. In October 2016, we re-branded the entire company as OneMain, and we serve about 2.2 million active customers now.”

OneMain financial has loaned more than $120 billion to over 10 million consumers since 1912.

Of course, though the names have changed over the years, OneMain’s dedication to helping the people and communities who need it has never wavered. The company has helped more than 10 million people through $120 billion in loans since 1912.

“For over 100 years, we’ve been helping hard-working people tackle life’s challenges by providing the help you need when you need it,” stated Jay Levine, President and CEO of OneMain. “Our loan experts are from your community, understand your unique situation, and will treat you with honesty, dignity, and respect. Our goal is to deliver the best customer experience and empower you to take control of your finances.”

While it originally funded manufacturers and building contractors, today OneMain focuses on helping consumers obtain secured and unsecured personal loans. Loan amounts range from $1,500 to $25,000, and there are no set minimums to qualify; most OneMain borrowers have FICO scores between 550 and 700.

“We do not have a minimum income requirement; however, we do require that applicants have sufficient income to repay their loan obligation, all other credit expenses and still have enough left over to cover their living expenses.”

Borrowers can fill out the initial application online but are encouraged to complete the process in their neighborhood OneMain branch for faster turnaround. “In some cases, loans can be completed entirely online,” said David. “Generally, if there is a branch nearby, loans are closed in a branch. This gives us the ability to fund the loan quickly — often the same day.”

When you head to the branch to close on your new loan, make sure to take all the necessary documents, including:

The actual details of your loan, such as your interest rate, will vary based on your qualifications, including credit history and overall risk. But, David said, the company caps the amount you have to pay. “In all states in which we operate, we do so below 36%, and we self-cap at 36% where there is not a specific state law,” he explained. “That includes all fees, so any origination fees, etc., are capped at the 36% in combination with the interest rate we charge.”

In addition to providing consumer loans, OneMain helps its customers learn to practice good financial habits through an extensive offering of educational information, tools, and resources.

“The financial well-being of our customers is of paramount importance to us, so we provide a number of tools to enable customers to build their credit rating,” explained David. “For example, we offer calculators, blogs, credit management articles, and free copies of the customer’s credit score.”

Articles cover everything from debt management and savings, to how to avoid fraud. OneMain also created MoneySKILL, a free money management course that teaches users about budgeting and using credit wisely.

OneMain also encourages borrowers to practice the new financial skills they learn by offering a little incentive; the company has developed a unique rewards program that sets itself apart from the rest of the industry.

“Unlike most other rewards programs, we award customers points for doing things that are good for them; for example, we reward paying on time, signing up for automatic payments and paperless statements, or regularly checking their credit score — which we provide online for free,” David described. “Customers can use these points to redeem for gifts cards to be used in restaurants, retail stores, movie theaters, and online.”

1,700+ Locations in 44 States Make It Easy to Find Your Neighborhood OneMain Financial Branch

In many ways, the modern world barely resembles that of 1912; between social changes and technological ones, I daresay someone from 100 years ago would feel they’d traveled to another dimension, rather than just a century into the future. That said, there are some things that have remained throughout the years, changing and evolving as the world does — like OneMain Financial. From a single location in 1912 to a national lender in 2017, OneMain has been helping consumers for over 100 years.

“We currently have more than 1,700 branches in 44 states, and 88% of Americans live within driving distance of one of our branches,” said David. “While we are now bigger and better than ever before, with more locations and more product offerings, one thing will never change: our commitment to providing an exceptional customer experience to every customer, every time.”