Making Change at Walmart: How Pushing for Better Pay and Benefits at One Retailer Can Improve the Entire Industry 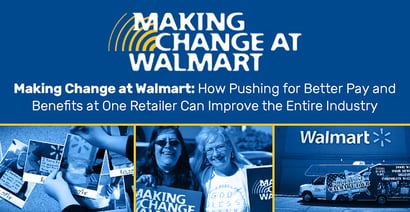 In a Nutshell: The United Food and Commercial Workers International Union (UFCW) launched Making Change at Walmart in 2011 to push for better wages, benefits, and working conditions for the approximately 1.5 million US workers at the country’s largest private employer. An ongoing campaign, MCAW is shining a light on improvements that Walmart can make for its workers amid the national debate over the living wage and other retail workers rights. The end goal is to change Walmart into a more responsible employer and for those changes to create a ripple effect throughout the entire retail industry, benefiting workers everywhere.

Across the country, many retail workers rely on their job to pay the bills and support a family. But as the cost of housing and food have risen, wages haven’t always kept up with that pace, leaving many families struggling.

In the midst of the push by national labor advocates to increase those workers’ pay, the United Food and Commercial Workers International Union launched Making Change at Walmart (MCAW) in 2011, a coast-to-coast campaign focused on improving pay, employee benefits, and working conditions at the country’s largest retailer and private employer.

Communications Director Amy Ritter said MCAW feels Walmart’s influence is so great that improvements in pay rates and working conditions there will move other companies to follow Walmart’s lead.

“Changing Walmart can change the retail industry as a whole,” she said. “Walmart, being the largest private employer in the country, sets the tone for one of the biggest industries for employment in the country.”

Amy Ritter, Making Change at Walmart Communications Director, spoke with us about the organization’s mission.

In early 2016, Walmart announced its phased plan to increase wages, but MCAW representatives and other advocates say that plan remains well short of paying a fair wage. The MCAW has launched several campaigns and national tours advocating for improvements for the retail giant. The most recent, revolved around college campuses and had a strong presence on Facebook and other social media platforms.

Amy said the most recent campaign, the 2017 Trump and Walmart Make America Worse college tour, which visited 30 college campuses across the country from September 5 to October 4, resonated greatly with gen z and millennials — a valuable demographic that many retailers struggle to connect with — who will be the leaders of future generations. The tour’s message focused on the shared values of Donald Trump and Walmart, which destroys public education and promotes a low wage economy. The campaign’s message reached over 1.7 million people through online ads, social media engagement, and a cross-country college tour that collaborated with student groups on-the-ground to sign up over 2,500 students to MCAW’s campaign.

Founded in Arkansas in 1962, the Walmart company now has more than 5,300 stores and 1.5 million employees in the US and annual revenue of approximately $486 billion.

Those numbers make it a giant not just in the retail industry but the economy as a whole. Money can either flow to American companies or overseas depending on where Walmart buys goods. Unfortunately however, Walmart is the largest importer of foreign goods in the US and its trade relationship with China has eliminated or outsourced an estimated 400,000 manufacturing jobs between 2001 and 2013 alone.

Amy said that is why it is so important to push Walmart to invest in its workforce, through increased wages, fair scheduling, and better benefits, all of which, could spread throughout the retail and service-industry and impact workers across the country who struggle to make ends meet, paycheck-to-paycheck. The MCAW campaign is part of the national debate on raising the minimum wage to help low-income workers support themselves by pushing for companies to pay workers a living wage — which they usually target at $15 an hour.

MCAW believes that pay and benefit increases at Walmart will lead to positive change in the entire retail industry.

“UFCW has always seen the value in a country that stands together and promotes better conditions for all workers as the rising tide lifts all boats — so to say,” Amy said. “We feel changing Walmart will help raise the standard of living for all retail workers and will rebuild our country’s economy and strengthen America’s middle class. There is intrinsic value in changing Walmart for the better.”

Better pay and more full-time employment with benefits would also reduce the number of Walmart employees depending on government public assistance programs like SNAP (Supplemental Nutrition Assistance Program), Medicaid and CHIP (Children’s Health Insurance Program) for themselves and their dependents. In fact, because Walmart’s wages and benefits are so inadequate and thousands of its workers are forced to rely on government assistance programs, taxpayers pay an estimated $6.2 billion every year in Walmart corporate welfare.

The MCAW campaign message resonates with younger adults and college students who care about fair treatment and pay for workers, and the ethics behind the companies they patronize, Amy said.

“This college tour has been a successful approach in engaging the next generation of leaders and one of the largest consumer demographics in the market,” she said.

Amy said the connection with gen z and millennials has been encouraging because they represent the next generation of workers and the country’s future leaders. As MCAW makes its way around the country for its current college campus tour, many students are showing a willingness to become advocates for a more equitable future.

Making Change at Walmart has resonated with millennials who will be the next generation of workers and leaders.

More broadly, she said the UFCW, which has about 1.3 million US workers in retail, grocery, and other industries, is also seeing keen interest and membership numbers among younger workers.

“It’s encouraging to see that younger folks still see the value of what a union can provide in regard to health care benefits or contract negotiations,” she said.

Raising Awareness Across the Country to Challenge Retail Industry Policies

MCAW’s Trump & Walmart Make America Worse Tour stopped at college campuses in the northeast, mid-west, and south, including the University of Georgia, historically black colleges Spelman and Morehouse in Atlanta, Georgia, Cornell University, the University of Notre Dame, and others. Amy said the organization is energized to get the stories of Walmart employees out to the general public. Workers often fear reprisal, so they are granted anonymity, and their faces are not shown on video as they discuss their pay and working conditions.

Earlier this year, as part of the “Expose Walmart” tour, MCAW visited over 30 cities and held press conferences with local elected officials, community leaders, and labor allies to expose Walmart’s negative impact on local communities. The tour used the experiences shared by real workers to tell the real Walmart wage story. In early 2016, Walmart unveiled a plan to allocate $2.7 billion toward salary increases, which included a wage of $10 an hour after new hires completed a training program, and now says they have an average hourly wage of $13.75 for full-time workers.

MCAW found that many Walmart workers were making below the $13.75 per hour average that the company claimed.

Beyond pay and benefits, MCAW points to other inequities, like this holiday season for example, where Walmart stores will be open on Thanksgiving, but workers at its sister store, Sam’s Club, have the day off.

MCAW: Campaigning to Make the Industry Better for All

In recent decades, Walmart has grown to be the country’s largest retailer and private employer, establishing a vast network of stores in suburban and rural areas where low- and middle-income consumers shop for discounted food and merchandise.

But the big-box giant has also drawn criticism and opposition from labor groups for its low wages and lack of employee benefits. The United Food and Commercial Workers International Union’s Making Change At Walmart campaign is crossing the country to bring attention to pay and worker rights issues at Walmart, and to spark change throughout the retail industry.

Amy told us those changes are in retailers’ own interests because better-treated workers will perform better on the job — and customer service will improve.

“They are the brand of that company,” she said. “You have to treat your workers better to perform better.”