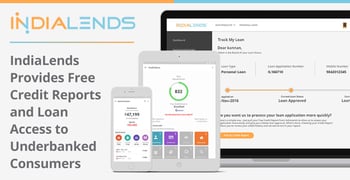 In a Nutshell: The Indian credit market has long been known for its low approval rates and a lack of consumer credit comprehension. But IndiaLends set out to change that dynamic by providing access to the educational resources and financial products that consumers need. The platform also offers free credit reports to Indian users, which can help them understand how to qualify for personal loans, lines of credit, and credit cards. The IndiaLends algorithm uses a variety of factors to match customers with ideal products, and its helpful tools empower consumers to make informed decisions with their money and credit.

Gaurav Chopra has worked in the consumer credit industry since 2005, and he spent a good portion of that time in the London offices of Capital One.

“I was there between 2005 and 2013, and I used to work on everything related to underwriting, credit models, and credit policies on the consumer lending front,” he told us.

Chopra had also evaluated India for a project on entrepreneurship as part of his MBA program at London Business School. During his study of the Indian market, Chopra encountered numbers that he described as “astonishing.”

That ratio wasn’t the result of the lack of consumer demand but instead from low approval rates. In the U.K., the norm was 35% to 40% approval. But in India, the approval rate was a paltry 10%. Demand was high among Indian consumers, but lenders weren’t issuing loans or credit cards.

So Chopra and a colleague, Mayank Kachhwaha, developed IndiaLends to solve that problem. The platform provides free credit reports to Indian consumers, and it serves as a marketplace for personal loans, lines of credit, and credit cards. Through its offerings, IndiaLends makes financial products available to a broader population while also ensuring consumers possess the education they need to make smart choices with their money.

“One reason approval rates used to be so low was that the cost of origination was similar for giving out a high-ticket loan versus a low-ticket loan. Hence, the banks focused more on the high-ticket loan,” Chopra said. “For that reason, only those who had a high income or very high credit scores were eligible, thereby reducing their approval rates.”

Another factor was the lack of data, Chopra said. With India still reliant on manual underwriting processes, many financial institutions didn’t take into account the millions of data points that lenders in the U.S. and U.K. could access.

“That is where we thought we could combine those areas and solve these problems,” Chopra said.

Chopra’s hands-on experience and insight inspired him to move back to India, where he started IndiaLends with a colleague in 2014. They were both well-versed in the problems of the Indian market and devised a two-part solution.

First, IndiaLends leverages digital origination and digital underwriting tools to solve the problem of cost and reach a large audience of consumers using the internet and mobile devices. To build that better digital underwriting process, IndiaLends needed digital access to records from banks and credit bureaus. With access to that credit data, the platform can provide consumers with free credit reports, which the bureaus themselves do not.

“Typically, when you get rejected for a loan, the feedback is that your credit score is bad. That means you must start inquiring,” Chopra said. “We were the first ones in 2015 to partner with Experian to offer this service, free of cost, to our users. Now we have close to 1 million new users coming to us every month for a credit report. That’s been a big success.”

IndiaLends provides credit reports for free, but only accesses those records when the consumer gives permission. Based on the information contained in their credit histories, IndiaLends educates each customer about what is strong in their report, what can be improved, and what products they qualify for based on their current credit rating.

The platform began as a P2P lending site, but now operates a marketplace that includes many traditional loan options. It offers consumers access to nearly 60 lenders, including some of the country’s biggest banks and finance companies. And by the end of 2019, those offers were being viewed by almost 8 million visitors each month.

The average loan obtained through IndiaLends is about $5,000, but options go up to $20,000. Digital origination and underwriting also mean that most decisions and approval take place quickly, although it occasionally requires in-person customer verification. Once approved, disbursal times range from the same day to four days.

When a consumer applies for a product through IndiaLends, the platform’s proprietary algorithm chooses a compatible lender based on three consumer factors. The first is the likelihood of acceptance based on a lender’s approval rate. If the approval rates are equal, the algorithm examines a second factor: The desirability of the terms and conditions of the product.

Users can track their credit scores and even apply for loans from many different devices.

After evaluating which lender will provide the best interest rates and terms, the final element is the time the lender will take to disburse the loan or line of credit.

“If everything else is the same, the faster lender will be given preference,” Chopra said.

Consumers often visit IndiaLends to obtain their free credit report, and many of them return to the platform when they need a loan or a line of credit. Some will even see their options and refinance existing loans through the platform.

And IndiaLends monitors customer performance on loans and credit histories. If the platform identifies a better product for customers — a loan with a lower interest rate or a card with better rewards — IndiaLends will reach out and inform them. That allows consumers to take full advantage of their improved credit and build it even further.

Due to the historically low approval rates in India, many of the nation’s consumers lack experience with loans and credit. Those circumstances, coupled with the broader availability of those products through IndiaLends, highlighted the need for expanded financial education.

The platform places a high priority on teaching consumers how to make smart, well-informed decisions regarding financial products and money management. One of the platform’s premier educational resources is its credit report landing page, which introduces the basics of what a report is and how it is used in the lending and approval process.

Another useful tool is the IndiaLends Blog, which covers a variety of finance-related topics. It includes information and news about lines of credit, Aadhaar — the 12-digit identification numbers issued by the Indian government and linked to financial accounts — income taxes, financial events, and balance transfers, among many other topics. Posts on those important topics help consumers get a broad view of how finance works in their personal lives — and India as a whole.

IndiaLends also maintains an informative FAQ page that covers basic questions on common topics, making it an ideal primer for consumers seeking to understand the basics.

“We realize that educating people — and keeping them up to date with trends in credit and how to be responsible with their borrowing and lending — is quite popular with the people in India,” Chopra said.

The Indian financial industry has changed dramatically since 2013, when there were only 25 million credit cardholders. That shift is due, in part, to the vision of Chopra and the efforts of his team to bring financial education and access to a wider section of the population.

“A lot of people, especially in the early 2000s, were not aware of what a credit report was,” Chopra said. “Now, there are about 50 million credit cards in India. That’s doubled in the last five years since we started.”

But beyond just providing knowledge and access, IndiaLends also offers an innovative virtual line of credit to its customers. This product allows qualifying borrowers to quickly and easily withdraw money when they need it and pay it back when they can. In the meantime, borrowers only pay interest when they’re using those funds. That presents a distinct benefit over, for example, paying an annual fee for a credit card that is used only in special situations.

And IndiaLends continues to focus on growing its customer base as it aims to become the largest credit report provider in India.

PersonalLoans.com: An Algorithm That Can Match You With a Lender in Minutes