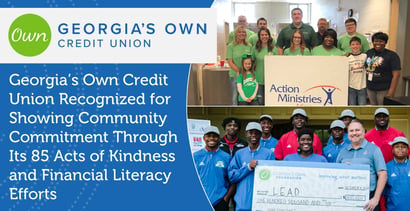 In a Nutshell: Georgia’s Own Credit Union celebrated its 85th anniversary in 2019 with its 85 Acts of Kindness initiative. Throughout the year, the credit union completed 85 acts that benefited various organizations and individuals, primarily in the Metro Atlanta area. This program lined up well with the credit union’s history of giving back to the community in numerous ways. Even when it’s not celebrating a big anniversary, the institution and its foundation remain very active in supporting the community through donations, fundraising events, and volunteer efforts. Georgia’s Own Credit Union also prioritizes financial literacy with programs aimed at all ages and stages of life. Because of these impressive efforts, we are recognizing Georgia’s Own Credit Union with our Editor’s Choice™ Award for Community Commitment.

Whether it was raising thousands of dollars for charities, volunteering to help those less fortunate, or giving out free pizza, Georgia’s Own Credit Union went big to mark its 85th anniversary in 2019.

The Metro Atlanta credit union celebrated the occasion all year long with its 85 Acts of Kindness campaign. Many of the acts directly benefited organizations and people around Atlanta in notable ways.

Some of the acts were in the form of monetary donations, some were from a philanthropic standpoint, and others were aimed at financial education, said Adam Marlowe, Georgia’s Own Credit Union’s Principal Market Development Officer. And some acts were a good mix of all three of those components, he said.

“One of my favorite ones that we did was in downtown and in one of our branch locations in Marietta,” Marlowe said. “We gave out Popsicles on a packed day because it was hot, and it can be a frustrating time. At the same time, we offered tax advice because it was a few days before tax day.”

Georgia’s Own Credit Union has come a long way from its humble 1934 origins as Atlanta Telco Credit Union — founded by six telephone company employees with an investment of $160.

Over the years, the credit union expanded its membership and service offerings and today stands as a fully modern financial institution with more than 30 branches across the Metro Atlanta region, east Georgia, and southwest Georgia.

The 85 Acts of Kindness initiative was a bold way to celebrate the credit union’s anniversary and the generous spirit behind it was simply an extension of Georgia’s Own Credit Union’s philosophy of giving back.

Because of its dedication to the regions it serves, we are recognizing Georgia’s Own Credit Union with our Editor’s Choice™ Award for Community Commitment.

We recently spoke with Marlowe to learn more about the 85 Acts of Kindness program. We also dove into how the credit union supports the community and delivers financial education even when it’s not celebrating a big anniversary.

Georgia’s Own Credit Union kicked off its 85 Acts of Kindness initiative in January 2019 by providing TSA employees who were affected by the government shutdown with 8.5 gallons of gas at two RaceTrac gas stations near the airport.

Atlanta is home to the Hartsfield-Jackson Atlanta International Airport — the busiest airport in the world. So, this gesture was surely appreciated by TSA employees.

Adam Marlowe is the Principal Market Development Officer at Georgia’s Own Credit Union.

“We’ve just done so many things,” Marlowe said. “We partner every year with a group called L.E.A.D. — Launch, Expose, Advise, and Direct — and in 2019 we raised over $100,000 for their group, which focuses on inner-city African American youth who may not have the same opportunities as others.”

Marlowe said the organization was founded by former Chicago Cubs player C.J. Stewart who launched the organization upon returning to his hometown of Atlanta. L.E.A.D. has historically focused on helping young males, but this past year, with the help of Stewart’s wife, Kelli Stewart, it expanded to focus on young females as well.

Georgia’s Own Credit Union documented each of its 85 Acts of Kindness throughout the year on its website. The impressive list ranges from acts that benefit individuals, organizations, the credit union’s members, and its employees.

“Educating our members is part of our mission. So in honor of our 85 Acts of Kindness, we held an internal contest where staff could win $85 just for educating members about one of our new Money Market products,” according to the credit union website.

The credit union also deposited money into the savings accounts of foster children, treated 85 credit union members to VIP seating and free food and beverages at Six Flags Over Georgia’s 4th of July fireworks show, and employees volunteered at the Atlanta Community Food Bank to create more than 6,000 meals.

Supporting the Community Through Donations, Events, and Volunteerism Throughout the Year

Although much of Georgia’s Own Credit Union’s volunteer efforts were part of its 85 Acts of Kindness program in 2019, the credit union encourages and supports volunteerism every year.

Marlowe explained how Georgia’s Own Foundation helps make this and many of its other community-oriented initiatives a success. He said most of the credit union’s philanthropic endeavors are handled through the foundation and community outreach partnerships.

“Since 1934, Georgia’s Own Credit Union has been committed to our ‘people helping people’ philosophy,” according to the foundation website. “We not only strive to serve our members’ financial needs but to give back to our communities through financial assistance and volunteer hours.”

Marlowe said the credit union works closely with Habitat for Humanity — the nonprofit’s administrative headquarters is in Atlanta — and Action Ministries in Atlanta and Savannah.

“Through Action Ministries, we prepare and serve meals for homeless individuals because we feel that we have an obligation to help them in a servant leadership role,” he said.

Included in its volunteer efforts is an annual Veteran’s Day initiative in which credit union employees come together to give back to U.S. veterans and their families, Marlowe said.

“This past year, our entire company got together that day, and, because it was our 85th anniversary, we built 85 bikes for children of veterans who could not afford to buy their child a bike for Christmas,” he said.

Promoting Financial Wellness to People of All Ages

“Throughout the year we always do financial literacy for our membership and the general public,” Marlowe said. “We offer classes at our local branches, and they range from topics on credit for buying a house and your first car — some of those major life events — a new child or you got married.”

But he said the credit union goes beyond the standard approaches to provide financial education to its communities, including a strong focus on young students as well as online course offerings.

“We have a fiduciary obligation to the communities we serve to be there educating them. That’s our job, that’s what we should be doing,” Marlowe said. “The younger you can start educating someone then the more time they have to use that information and experience the fruits of their labor.”

“We started offering true financial literacy classes to the students who go to school there,” Marlowe said. “At Georgia State, we’re doing a pilot program with a more specialized group and I actually go and teach these classes to them.”

And Georgia Southern is in the process of revamping its freshman class requirements to include a course on financial literacy.

“At the point, we’ll be reaching close to 60,000 to 70,000 students in all,” Marlowe said. “It’s super important to me. At the end of the day, I think we’re called to help teach people how not to make mistakes like we made. I certainly want to make sure the next person that graduates college does so in a much better position than I was.”

Marlowe added that, with today’s economy changing at a rapid pace, it’s important to set people up to be prepared for the best and the worst.

Changing the Perceptions of Financial Institutions

Marlowe said Georgia’s Own Credit Union continues to work hard on changing the perception of financial institutions as a whole.

“More specifically, we don’t want our members to think of us as just — for lack of a better term — other banks,” he said. “It really is a partnership, and they own it. And we really want to get back to what they want and what they need.”

As an example of this, Marlowe said the credit union opened an engagement center in the heart of the Georgia State University campus in downtown Atlanta. Rather than having desks and tellers, the center is a large, open space with places for students to study.

“We’re really trying to get more toward the community partner side of it, and not so much about banking,” he said.