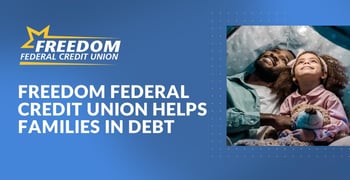 In a Nutshell: Credit unions are known for their efforts to go above and beyond to serve both their members and their communities. And Freedom Federal Credit Union in Maryland is no different. The long-running financial institution strives to provide products and services that will benefit people struggling with debt, including its innovative Anything Loan. The credit union also sponsors numerous events and activities in its communities as well as promotes volunteerism among its staff by paying them for their volunteer work. Freedom Federal Credit Union also provides financial literacy resources for its members and the community at large through a number of initiatives, including its online Financial Education Center and school programs.

Credit unions in the U.S. have long been known as institutions that embrace the ethos of people helping people. Credit unions are playing a crucial role for many in 2020, with income inequality more evident than at any other time in recent memory and COVID-19 impacting the financial health of millions of individuals and businesses.

“We’re founded on this driving principle of people helping people,” MacPherson said. “Not for profit, not for charity, but for service.”

We recently spoke with MacPherson about the ways in which Freedom Federal Credit Union continues to help people via financial products and services and community support.

The credit union has stepped up to serve its members and community in the face of the COVID-19 pandemic, but even before that, it was working hard to fulfill its mission to offer financial opportunity, choice, and value while building meaningful relationships.

MacPherson discussed Freedom Federal Credit Union’s offerings for its members, including ways in which it sought to relieve the economic distress brought about by the pandemic.

“We’ve worked over the years to create an array of products and services that specifically can help families struggling with debt,” MacPherson said. “And we continually revisit those product lines to ensure that our members are covered regardless of their financial situation.”

He said members of the credit union can expect, as a baseline, the modern financial products offered at other credit unions and banks — but with special attention to quality service.

“The last thing we want is for someone to be buried in debt then fall further victim to poor practices that exist among some banks, and even corner loan shops like payday lenders,” MacPherson said.

Freedom Federal Credit Union aims to help families who are struggling with debt.

Among its line of financial products and services, Freedom Federal Credit Union’s Anything Loan stands out as an option that may be particularly helpful for those struggling with debt or trying to avoid further long-term debt.

“You may be in need of financial support that doesn’t fit a specific loan category,” according to the credit union website. “Not everything does, so we offer our Anything Loan to help fund whatever it is that you need.”

“Our objective is to ensure that we are providing the product that fits the needs of that individual,” MacPherson said. “Somebody can walk in and want a debt consolidation loan, but a home equity loan would be much more beneficial to them. We’re going to let them know.”

When the COVID-19 pandemic spread to the U.S., MacPherson said the credit union immediately took action.

“When COVID hit, the first thing we did was put a plan in place to defer payments on any type of loan, including mortgages,” he said. “It was not a thought; it was ‘just do it.’ We wanted to talk to each individual that needed assistance to dive into their situation — what’s going on with them, their work, their income, their family.”

MacPherson said that after the initial round of deferments, the credit union allowed members to come back and consult on further relief options as well.

Bolstering the Community through Volunteering and Philanthropic Efforts

MacPherson said that, while Freedom Federal Credit Union has been a longtime supporter of its communities in many ways over the years, when he became CEO in 2015 he sought to make some of its efforts more official.

“One of the first things I did was institute a community outreach program,” he said. “We’ve always done a certain level of philanthropy — give to charities and doing sponsorships — but I saw the potential to do even more good.”

Mike MacPherson is the President and CEO of Freedom Federal Credit Union.

MacPherson said it was important to him to find out how the credit union could become even more impactful for its members and the communities it serves.

“For a credit union our size to bring (philanthropic endeavors) up to $100,000 or more was pretty significant,” he said. “Beyond that, I wanted to be able to have not only volunteerism going on for the benefit of the community but recognizing that it also meant a lot to the staff.”

To better promote volunteerism among the staff, MacPherson said the credit union instituted a program that allows staff members to volunteer during work hours and still get paid as if they were working.

MacPherson said the credit union is active in sponsoring a number of events and activities in its communities throughout the year, but of course 2020 was a little different.

“Every one of those (events) was canceled. But we didn’t pull back our financing,” he said. “We still gave them the money. Sometimes the events were able to continue virtually, but otherwise, we still provided the financial support.”

“We also supplied PPE supplies to various organizations and for events they were holding so they could maintain their protective measures,” MacPherson said. “A lot of the COVID-related philanthropy involved maintaining the commitments that we had already made, as well as providing those types of supplies that became more and more important.”

He said the credit union did not allow the pandemic to deter it from providing support for the community in areas where it was needed most.

Financial Education Initiatives for People of All Ages

Freedom Federal Credit Union also provides a rich offering of financial literacy resources for its members and the community.

“We have very easily accessible courses on our website through a third-party vendor that we partnered with,” MacPherson said.

The free modules in the credit union’s online Financial Education Center are self-paced and interactive, according to the institution. They cover key financial concepts, including saving, investing, credit scores, mortgages, paying for college, investments, and identity protection.

“The modules are two to seven minutes long, are mobile and tablet accessible, and are available in both English and Spanish,” according to the website. “Many modules feature Action Plans with budgeting and planning tools to reinforce positive behavior and help you take positive steps toward better financial health.”

MacPherson said the credit union also maintains financial literacy initiatives in local schools, including meeting with students and offering internship programs in conjunction with the Academy of Finance at one of the local high schools.

In recent years, the credit union has partnered with Harford Community College to help people nearing graduation secure a paid internship at Freedom Federal Credit Union or one of three other financial institutions in the county, MacPherson said.

“We’ve really tried to ramp up the education side of things,” he said.

MacPherson also contributes regularly to a blog on the Freedom Federal Credit Union website in which he writes about a wealth of financial issues and developments within the financial institution.

With its products and services aimed at helping people in debt, its volunteerism, and financial literacy efforts, it’s clear that Freedom Federal Credit Union is serious about its philosophy of people helping people.