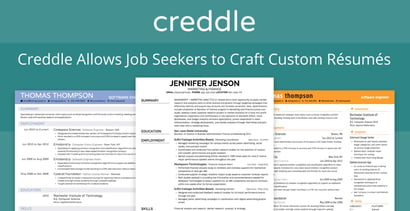 In a Nutshell: A résumé is one of the most critical documents in your professional life, but creating and maintaining one can be a time-consuming task. The Creddle platform was designed to help users easily draft, customize, and update résumés to suit their needs. Users can also unlock cover letter features and multiple résumé functionalities with a small, one-time payment or by referring a friend to the app. Creddle’s tools and  insights make it a valuable resource for anyone looking to draft a new résumé or make theirs stand out from the crowd.

Job-seekers typically do a few things to prepare for an interview. They try to get a good night’s sleep and ensure their clothes are clean, pressed, and sharp-looking. And they prepare themselves for the questions they will need to answer — as well as the ones they may be expected to ask.

Those simple steps can contribute to making a good first impression with a potential employer. But before they can put those interview prep strategies into action, they have to grab the employer’s attention another way: with their résumé.

Preparing an effective résumé and cover letter can be a difficult task. Templates make the process faster, but they’re easy to spot. And if many job-seekers use the same templates, applicants will have trouble standing out from the crowd.

Customizing a striking résumé manually in a word processor, though, can be a daunting process that presents other challenges. While software programs offer tools and services to ease the workload, they typically come at a premium cost.

That’s why many people looking to build, or refresh, their résumés turn to Creddle, a free platform that simplifies the process. And its intuitive interface allows for maximum customization with minimal effort.

Creddle was designed by Chris Carey, who is familiar with the challenges job seekers face when preparing job applications. Carey began working on the web app in 2014 while studying at the Rochester Institute of Technology. He found himself updating his résumé regularly and wanted a tool that eased the workload.

“I had a lot of internship experience, and after every summer, I had to update my résumé. I was also trying to stand out to get the attention of a company at the career fair at my school,” Carey said. “First, I tried to design something more visual that stood out, but there are things you can do to a résumé that can make it look unprofessional. As I was trying to figure out that balance, it got me thinking about building a tool.”

Based on his experiences, Carey developed Creddle — and has been improving it ever since. The current design is based on his own knowledge of résumé building and what he believes app users need.

His expertise in both job-hunting and document design makes Creddle a valuable tool for anyone who wants to secure an interview by making an excellent first impression on an employer.

An Intuitive Tool Designed to Fit Any Budget

Carey’s work on Creddle was inspired by a sense of solidarity with his fellow students. He and many of his classmates began job-hunting at the same time, and the first step on that path was building an eye-catching résumé that showcased their potential.

While other tools and services were available to help them create professional, attention-grabbing résumés, they all came at a cost. After experiencing that dynamic, Carey knew he could do better with Creddle.

Chris Carey wanted a résumé tool that would allow him to update often without a subscription fee.

“Before I built Creddle, I searched for other résumé design tools. There were some builders, but most of them had a monthly subscription, which didn’t make sense because I only updated my résumé once a year,” Carey said. “College students, or anyone looking for a job, want to lower the cost of their job search. That was my motivation to build a tool that helps with résumé design and does the same things other tools do, but offer it for free.”

But Creddle’s financial accessibility doesn’t mean that it is a lighter version of a powerful tool. It offers a wide variety of features and templates, as well as a straightforward and easy-to-use interface. Those aspects make it an excellent value for students looking to break into the workforce as well as for professionals who find themselves in the job market.

“It just doesn’t feel proper to charge for a tool that is used by applicants who are searching for a job,” Carey said.

Creddle gives users control over résumé content and formatting and enables them to arrange and present their information. They can add features, including bullet points and hyperlinks, easily edit content, and reorder, rename, and delete entire sections.

From Creddle’s home screen, users can access the various résumé sections. Those include basic information, professional summary, education and employment histories, skills, and completed projects, among many others. A custom section is available to capture any other information.

Tools allow users to auto-fit their résumés to one entire page.

Once users enter their information and want to see how the résumé is shaping up, Creddle’s Résumé View mode allows them to sneak a peek. From the interface, users can alter headings and sections, print their résumé, or export it to a PDF. The platform also offers a peer review option, similar to sharing in Google Docs, which allows friends and colleagues to view the document and provide feedback.

Job seekers can use Creddle to draft cover letters, too, which can add context and personality to the information provided on a résumé. Users can create multiple résumés, since a single version may not be tailored to every position. And customizing a résumé to a job’s specific requirements is a good way to stand out.

“Those features can be unlocked for a one-time $5 fee or users can just refer a friend to join Creddle,” Carey said. “There are some people who don’t want to go through the process of referring, so $5 is a fairly small amount. For those who refer a friend, the full capability of the site is available for free.”

Over the years, Carey has learned a lot about best practices and ways to stand out from the crowd of job-seekers. One early step Carey took, which he encourages all students to take, is to visit their school’s career resource center.

“I think I got to know my career specialist in my field pretty well,” he said. “They’ve seen a lot of résumés, and they know what companies are looking for. They helped me get used to writing the type of language that you would want on a résumé.”

And all job seekers — student or otherwise — should review sample résumés from others in their field. Additionally, they should share résumés with friends and colleagues, and Creddle’s Peer Review function makes that process simple.

“My friends and I would share our résumés to critique each other and understand different ways to highlight the professional work we’ve done,” Carey said.

As for the résumé itself, Carey recommends keeping it to a single page. Job seekers can achieve that limit by including only the most relevant information for the position, adjusting line spacing, and using narrow typefaces. Creddle’s formatting interface and auto-fit features can help users accomplish that with minimal effort.

When arranging a résumé, Carey advises placing the most relevant information at the top of the page, where it will receive the most attention. Professionals should list relevant work experience and strengths. Students, who may not have much work experience but copious academic merit, should place the education section first.

“There are subtle things, like bolding certain phrases that you might want to call attention to, but be careful not to overdo it. Some color, but not too much, might help pop things out ever so slightly, just because there’s a lot of résumés coming in white and black,” he said.

Carey now works for Google — where he still spends a lot of time looking at résumés — and he devotes some of his off time to improving Creddle. He directs most of his effort to maintaining the app’s functionality and providing customer support.

He also maintains an FAQ on the Creddle ‘About’ page that covers common user issues.

“What I’m happy about is the number of emails asking me questions, asking about features, has decreased over time because, once enough users ask about a feature or a capability, I’ll just build it in,” Carey said. “Custom sections was one. Résumés can have so much information, so I built in the ability to add a free-form section of whatever you need.”

Those user-centered features, combined with Carey’s own experience-based tips and strategies, allow any job hunter to create an impressive, professional résumé.

Whether it’s a student fresh out of school, a seasoned professional, or anyone searching for employment, Creddle is a go-to tool that can help them quickly and easily create the perfect résumé with minimal effort and cost.