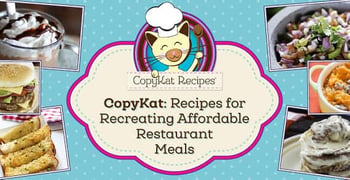 In a Nutshell: Stephanie Manley started CopyKat Recipes as a way for food lovers to recreate delicious restaurant menu items in their own kitchens for a fraction of the cost of dining out. The website features over 2,000 recipes with most of them dedicated to popular dishes at her followers’ favorite restaurants. The recipes are easy to understand for cooks of all talent levels and use ingredients that are readily available at most grocery stores. By following the simple instructions on the site, users can “dine out” at home and create memorable meals for friends and family for an estimated quarter of the price they’d pay at a restaurant.

Stephanie Manley grew up in a small town in rural Texas. Driving into the nearest city with her family to dine out was considered to be a special occasion — one that she describes as “magical,” simply because it didn’t happen very often.

Stephanie and her family did, however, enjoy cooking and baking at home, where she would recreate some of their favorite restaurant dishes. In 1995, she started publishing her family recipes online to capture them in a format that would preserve them forever.

“I grew up in a small town, and we’d go into town to eat infrequently,” Stephanie said. “We wanted to recreate those [restaurant] experiences at home because they just weren’t available where I lived.”

Stephanie is the founder of CopyKat, and her popular website includes recipes for dishes found on menus at some of the most well-known restaurant chains in America, like Olive Garden, Applebee’s, Whataburger, and Starbucks. The site hosts recipes requested by her readers for meals and dessert items found in popular eateries, in addition to recipes that cater to seasonal favorites, such as a replication of Reese’s Peanut Butter Eggs, a popular treat around Easter. 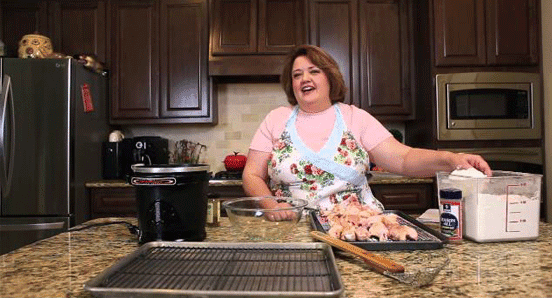 Founder of CopyKat, Stephanie Manley helps her readers recreate their favorite restaurant dishes at a fraction of the price they’d pay at an eatery.

The recipes are easily accomplished by amateur chefs and include ingredients readily available at most supermarkets. The best part is that they can be prepared in a home kitchen for a fraction of what they would cost when dining out or purchasing pre-made meals from stores.

Popular Restaurant Favorites Made in Your Own Kitchen

For those who dwell in rural towns with limited restaurant options, dining out can be an inconvenience. And while eating at restaurants is exciting and satisfying, it also tends to empty wallets and pocketbooks.

As it turns out, this isn’t really stopping many Americans. For the first time in history, Americans spent more at restaurants and bars than they did at grocery stores between 2015 and 2016, with the dining-out tab reaching $54.8 billion compared with $52.5 billion spent on groceries. While this points to serious issues with money management and consumer spending trends, preparing meals at home is still the economical choice.

CopyKat gives users access to more than 2,000 recipes with do-it-yourself instructions on recreating restaurant favorites like Olive Garden’s Chicken Alfredo, Applebee’s French Onion Soup, and Starbucks’ White Chocolate Mocha. The overall savings of the made-at-home is generally quite significant when compared with the originals.

“The Olive Garden Chicken Gnocchi Soup and the Olive Garden Salad Dressing are really popular,” Stephanie said. “I haven’t priced it out, but you can probably make four family-sized portions [of each] for less than one at Olive Garden. And that’s using high-quality ingredients.”

Stephanie includes the price of the original menu item in many of her posts, so you can relish in how much money you’ve saved when you make these nearly identical dishes at home.

“I think an easy comparison would be like a Starbucks — $3.50 worth of ingredients [for at-home preparation] retails out at around $30 [at Starbucks] so you save around 90%,” Stephanie said.

Cooking and baking can seem like daunting tasks. Often, it’s because recipes include long lists of hard-to-find ingredients and challenging techniques that aren’t suited for kitchen novices.

Stephanie keeps things simple on CopyKat by using ingredients that can be found at nearly any grocery store, along with easy instructions that don’t require sophisticated equipment or a French-to-English dictionary to prepare.

“Some things you do need special equipment for; I try to stay away from those,” Stephanie said. “I just try to make sure that the average home cook can make it.”

In addition to CopyKat’s simple instructions and common ingredients, you’ll find alternative preparation methods for some of the recipes, just in case you don’t have access to certain equipment. For example, if you don’t own an espresso machine for one of her recipes that calls for espresso, Stephanie suggests using strong drip or french press coffee instead.

Having a solid list of seasonal recipes in your arsenal really comes in handy when planning gatherings and holiday get-togethers. Pies, Easter candy, and other holiday dishes (HoneyBaked Ham, anyone?) can really add up if you purchase them at the store, but when you roll up your sleeves and take a DIY approach, the savings can be significant.

“What’s most popular are seasonal dishes,” Stephanie said. “[Near Easter], Reese’s Peanut Butter Eggs are popular. There’s just a little bit of variation in it.”

Having the ability to create an assortment of seasonal dishes can lead to big savings, but it’s also empowering to know that you can create holiday favorites on our own. Once you’ve stocked your kitchen with the right equipment and ingredients, you’ll be ready for guests at a moment’s notice.

Also worth noting is that many stores and restaurants are closed on major holidays such as Thanksgiving and Christmas. If you have the wherewithal and the know-how to make seasonal favorites at home, however, then you’re already two steps ahead.

Not only are you saving money by knowing how to create seasonal favorites on your own, but you’ll never have to go without that Baskin-Robbins Turtle Pie that grandma loves on Christmas, just because the shop was closed.

CopyKat Lets You Dine Out at Home and Save Money

The accessibility and affordability of her recipes make it possible for just about anyone to create that dining-out experience in their own home, bypassing the hefty price tags associated with being charged restaurant prices and tipping the wait staff.

Saving money is always an appealing prospect, and when you can enjoy delicious restaurant-style meals and desserts using CopyKat Recipes without dipping into your savings, it just makes it taste that much sweeter.