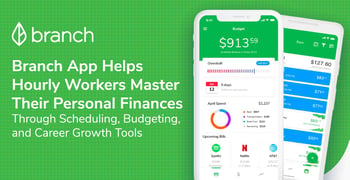 In a Nutshell: Income variability can make it difficult for hourly workers to plan and pay for necessary expenses. But the Branch mobile app helps them take the guesswork out of earning and budgeting thanks to its suite of tools and services. The app tracks earnings and expenses and can connect to a user’s bank account to produce a more detailed financial picture. Branch users can also negotiate shift swaps with co-workers and even pick up extra hours, enabling them to enhance their income. And if users are short on funds, they can take advantage of Branch’s Instant Pay feature, which allows them to access wages they’ve earned before payday.

The Federal Reserve revealed the nature and impact of income variability among Americans in its Report on the Economic Well-Being of U.S. Households in 2018. According to the report, 3 out of 10 adult incomes vary from month to month, with 1 in 10 struggling to pay their bills due to that instability. As you might expect, those with little or no access to credit are the hardest hit by such financial volatility.

Those individuals may incur late fees on unpaid debts, service cutoffs for utilities and mobile phones, and even negative marks on their credit reports — which only exacerbate their problems. Those difficulties can compound, leading to further financial hardship and difficulty regaining financial solvency.

The Branch app presents a solution that helps hourly workers boost their income, manage their money, and meet their expenses. Best of all, it can allow them to do so without going deeper into debt or incurring undue hardships.

“Branch is mobile-first technology that is designed to help hourly workers financially,” said Jason Martin, Director of Growth at Branch.

Branch launched in 2015 as a mobile scheduling app, but it quickly expanded to encompass other solutions oriented to the needs of hourly workers. Its features include the ability to schedule extra shifts, manage budgets, and even access income before payday through the Instant Pay feature.

Branch tools are designed to provide a user-friendly experience that gives workers peace of mind and enhances their financial wellness, which can improve their quality of life.

As the Fed’s report disclosed, unpredictable work schedules can be a source of additional financial stress. Some 25% of U.S. employees work within a variable schedule, and 17% of those people work schedules based on employer needs. But Branch’s scheduling function can help them turn that variability to their advantage.

Users can swap shifts with their coworkers. Managers still retain oversight of scheduling and may need to approve these changes. An integrated messenger function makes it easy for workers to coordinate among themselves to pick up extra hours and earn additional income.

Branch users can track their income and bank accounts from the app’s intuitive interface.

Branch users can also create profiles that function like résumés, outlining their work history and displaying skills and endorsements from employers and colleagues. This functionality can help workers move up the ranks and even attract the attention of other employers.

Partnerships with major employers — including Target, Kum & Go, and many others — drive Branch’s adoption, enabling the company to roll out the app to large numbers of workers. Employees with Branch partner companies get the app’s full functionality as a free benefit, but it is available to any hourly worker who wants to use it, albeit with more limited features.

“Any hourly worker can download the app for free and get started in just a few minutes,” Martin said.

Branch’s wage tracking feature allows users to tie their hourly wage to their shifts and hours worked, providing them with a more accurate picture of their income. The feature also saves them the time and effort of performing the calculations on their own and can make it easier to budget for upcoming expenses.

Jason Martin, Director of Growth at Branch, told us how the app can help hourly workers learn to manage their money.

Integration of Plaid APIs — applications that allow different platforms to interact and exchange information — enables Branch users to securely connect their bank accounts to the app. This feature is compatible with over 10,000 of the most popular banks in the U.S., including credit unions and smaller local banks.

Once Branch is connected with a bank account, it imports information and categorizes expenses, shows upcoming bills, and displays paychecks from employers. That integration allows workers to oversee their financial situation.

“Our goal is to always keep them at a strong, healthy balance in their account,” Martin said. “We can detect when their paycheck hits and start to predict how much cash flow they have to work with so we can provide some recommendations on spending.”

The Branch app also provides financial wellness tips to teach users how to budget their funds and how to take full advantage of its features and functionality.

A surprising number of Americans are ill-equipped to deal with an emergency expense of $400 or more, according to the Fed. Among the working population, 61% reported that they could cover the expense using cash, savings, or credit cards. Another 27% could cover the expense, but only by borrowing money or by selling personal property. Finally, 12% said they do not possess the means or resources to cover the expense at all.

That is why Branch offers an Instant Pay feature that grants workers access to wages they’ve already earned before they’re dispensed on payday. Advances are based on hours employees have worked or a percentage approved by employers partnered with Branch.

The app also offers a free, three-day automated clearinghouse network (ACH) option that deposits the money directly into a worker’s account. Users also have the option of paying a flat fee for instant delivery of the funds.

“A lot of users really appreciate having a reliable way to get instant access to wages they’ve already earned, and they use that primarily for food and groceries and personal emergencies,” Martin said. According to Branch’s research, 66.9% of Instant Pay users take advantage of the funds to obtain food and groceries. That capability presents a desirable alternative to payday lenders and other subprime loans that can result in a debt spiral.

“With a lot of the traditional lending sources, there are so many hidden fees and a lack of transparency,” Martin said. “It puts them in tough situations. Sometimes, their only alternative solutions are going to payday lenders and get charged an arm and a leg for things that are out of their control.”

When Branch launched in 2015, it was under the name Branch Messenger. In 2019, it became simply Branch, reflecting its evolving focus as a fintech application with an emphasis on financial wellness rather than just a messaging app. The additional features and improvements were developed and implemented based on in-app surveys and feedback from users.

“Seeing that feedback from the hourly workers helps us go more into the fintech and the instant payment world, too,” Martin said.

Of course, Branch continues to gather feedback from its users by conducting surveys through the app. But the company has also expanded to conduct in-person interviews as well.

“We’ll have users come to the office and we learn more about their pain points,” Martin said. “Getting that direct feedback helps shape the product. Hearing their stories is important to us — especially what they’re using the money for — and that helps give additional ideas about what should be built down the road.”

Moving forward, Branch will continue to focus on meeting the needs of hourly workers as those needs evolve in such a dynamic labor environment. The company’s primary goal for the app is to expand its functionality.

That’s why Branch continues to innovate, creating additional tools and services to improve the financial situations and prospects of America’s hourly workforce.