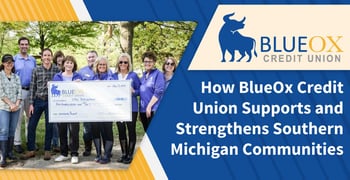 In a Nutshell: Financial literacy is lacking in the U.S. The subject is not a requirement for most children’s education, and the topic remains taboo in many households. Thankfully, organizations such as Southern Michigan’s BlueOx Credit Union are working to fill this knowledge gap through numerous financial literacy initiatives. The Credit Union also provides valuable financial counseling to its members. BlueOx prioritizes giving back to the community in other ways as well, including through its Random Acts of Kindness program, the BlueOx Credit Union Foundation and community scholarships.

This means the responsibility of teaching children in the U.S. about finances, budgeting, and saving falls to parents. But, for the most part, they aren’t discussing these things with their children either.

Thankfully, community-oriented organizations, such as BlueOx Credit Union in Michigan, are working hard to deliver quality financial literacy to the communities it serves.

As a matter of fact, education has been at the core of the Credit Union since its very beginning. The organization was founded by Battle Creek school teachers in 1936 as the Battle Creek Teachers Association Credit Union.

“Over the years, our charter was amended and expanded several times to include educationally-related groups in various areas, and our name was changed as a reflection of the changing membership, to where we are today, a community-based charter serving 17 counties in lower Michigan,” said Joan Miller, Marketing and Communications Manager for the Credit Union.

Miller said the Credit Union’s latest evolution came in the mid-to-late 2000s when it shifted its focus to serve a more diverse membership, welcoming the Hispanic and Burmese communities in the region. “This outreach has become a niche for us, now supported by several bilingual and multilingual employees.”

BlueOx Credit Union takes its community-based charter seriously, as demonstrated by its deep involvement in the community, including its financial literacy and financial counseling initiatives.

“Having roots as an educationally-based Credit Union, financial literacy has always been a priority, but really it should be with any financial institution,” Miller said. “No financial institution or community benefits from members or customers who are unable to meet their obligations or mismanaging money.”

“We don’t want to be car dealers or real estate agents (due to repossessions and foreclosures),” Miller said. “We want our members to be successful and financially healthy because that impacts our financial health.”

BlueOx Credit Union operates on a grassroots level by working with members one-on-one to provide advice and guidance.

“For those who need something more intense, we have a trained financial counselor on staff,” Miller said. “We also go out into the community, delivering presentations to high school classes, conducting financial reality fairs, and other events.”

The Credit Union has also participated in classes for Burmese refugees who were starting a new life in the U.S. and had no background knowledge of some very basic financial concepts. Miller said the classes addressed topics including explaining different denominations of currency, how to use a debit card and understanding credit reports and scores.

“So, in terms of making sure members have access to resources, we invest a lot in people resources — people to deliver class presentations or work one-on-one with individuals,” Miller said.

Miller said that, while BlueOx maintains one formally trained financial counselor on staff, many Credit Union employees have extensive backgrounds in the credit union industry and in providing financial literacy classes.

“Common issues we see are people not thinking long-term when making credit purchases, or not managing their money in terms of some sort of a budget, so they are always running negative,” Miller said. “Any little bump impacting income or an unexpected expense sends the snowball rolling downhill.”

Through its financial counseling program, BlueOx works with members to establish a financial safety net and avoid financial pitfalls in the future.

The BlueOx team works on building a safety net, beginning with establishing a savings account, then identifying other ways to head off some of those financial bumps along the way.

“There can be a variety of ways to do this, sometimes people just need encouragement and a gentle push,” Miller said. “It may be selling a few things and using that money. Or encouraging the person to earmark some of their tax refund for this purpose, or setting up a payroll deduction to an account that may be a little harder to access than their usual account.”

Miller said in some cases, taking on a temporary part-time job to supplement income can help build a financial cushion to get the individual to more solid financial ground.

“Every situation is different, and what works for one may not work well for another, but a good brainstorming session with some action steps is a good start,” she said.

Some of the suggestions the team makes may be hard to hear and hard to execute on, Miller said, but they are often necessary. Scaling back non-essentials — television packages are a category where trimming is often possible — and exercising discipline in spending and eating out is a common way to save. “We can brainstorm options, so the family has some type of home entertainment, but at a more reasonable cost,” she said.

Another area worth examining is the existing debt a person or couple is carrying, Miller said.

“What are the interest rates? Could some or all of it be consolidated into a more reasonable rate loan (with a caveat to avoid running the balances back up), or transferred to a credit card with a more reasonable APR, or even better, one with an introductory 0% APR on balance transfers?” she asked. “This gives the person a few months to really make a dent in the balance so they can get closer to the finish line.”

Random Acts of Kindness, Non-Profit Contributions and Other Ways the Credit Union Gives Back

Not only does BlueOx Credit Union directly impact its members and community with its financial literacy efforts, but it also gives back to the community in a number of other supportive ways.

“We’ve often done Random Acts of Kindness outside of a formal program, but this winter we made it part of our checking promotion to pay it forward to our communities,” Miller said.

The Credit Union gave each of its six branches a budget of $250 and encouraged them to work with their teams to decide how they should spend it. Miller said the teams sought out opportunities to say thank you to people who were going above and beyond in their communities.

“They surprised a longtime and dedicated volunteer at Henry Ford Allegiance Hospital in Jackson with flowers and a gift card — just walked in and surprised her and said thank you,” she said. “Several teachers received a similar surprise thank you and recognition. Some groups went out and bought a supply of diapers for a women’s and children’s shelter.”

Miller said other groups delivered hats, gloves, and zip-up sweatshirts to area shelters during a February cold snap. Another group surprised workers at an animal shelter with lunch. Another office made a donation to a shelter for the purpose of providing parents and children with a very rare treat of a dinner out or a movie.

“This had a dual benefit of giving our staff a boost, as well. There was a study done by Emory University that proved when you are kind to another person, your brain’s pleasure and reward centers light up as if you were the recipient of the good deed — not the giver,” Miller said. “We know our staff thoroughly enjoyed spreading these kindnesses and would validate Emory University’s findings.”

BlueOx Credit Union also gives back through its foundation, which was established in 2017 with a mission to help support the needs of its communities. In 2017, the foundation assisted six nonprofit organizations in the area with contributions totaling $2,600.

Financial education criteria in schools may be lacking — and parents may struggle to discuss money with their children — but, thankfully, organizations like BlueOx Credit Union are doing their part to fill in this crucial knowledge gap for tomorrow’s leaders.