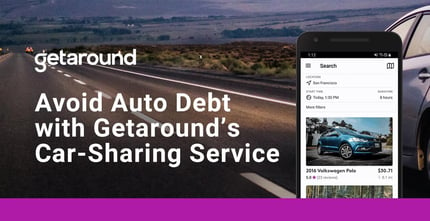 In a Nutshell: Automobiles have forever altered the way we travel as well as how and where we live. But despite the advantages automobiles offer, there’s no denying that fossil fuel-powered vehicles are bad for the environment. That’s why Getaround launched its innovative car sharing service. The platform allows users to quickly and easily book vehicles near them for road trips or to simply run errands around town. Getaround’s model provides a way for people to be mobile without the burden of paying a monthly car bill. On the other side, Getaround offers a simple way for vehicle hosts to make some extra money when their vehicles may otherwise just be sitting unused in a garage or driveway.

The invention of the automobile changed the world in countless ways. Automobiles made traveling more convenient than ever and allowed people to live farther away from their workplaces than before.

Of course, we now know how damaging the millions and millions of gas-powered automobiles can be for the planet.

In the U.S., owning a car also became a rite of passage, signifying freedom and the American spirit. But in reality, the expectation that everyone should own a car has led to increased debt for millions in the form of monthly auto loan payments.

Getaround recognizes these challenges to the health of the planet and to the bank accounts of folks working to reduce debt.

“The company was founded in 2009 with the vision to make cities and communities better places to by enabling access to vehicles that sit unused on average 22 hours a day,” said Getaround’s VP for Customer Experience, North America — Ruth Yankoupe. “So the goal of the platform was to connect owners of those cars in a safe way to renters who need them.”

Getaround offers a solution to these challenges through its tech-based program that allows users to rent vehicles from other regular folks on the Getaround platform.

Yankoupe said the company currently maintains a presence in lover 300 cities in the U.S. and over 800 cities globally.

Easily Rent and Unlock Nearby Automobiles with Getaround Connect Technology

Yankoupe discussed the advantages offered by renting a vehicle using Getaround, and how the company’s vision of guests has evolved over time.

“Our guest profile has changed recently and in addition to the leisure traveler or vacationer, we know that we now serve the utility renter, somebody who needs a car to run errands and get work,” Yankoupe said.

The Getaround app allows users to conveniently locate and access Getaround rental vehicles near them.

This means Getaround is now focusing on people in their day-to-day lives — people who need to take their kids to school or make a trip to the grocery store, she explained.

“We’re really trying to capitalize on the ease with which we make our cars available to people,” Yankoupe said. “And convenience is a big factor — the fact that we’re located near where our guests live.”

Ease of use, convenience, and value really get to the heart of what makes Getaround appealing for so many users. Yankoupe said the company conducted a survey of Getaround users in San Francisco, and 94% of respondents have not considered purchasing a vehicle or have given up considering purchasing a vehicle since they started using Getaround.

“We put everything that the guest needs in the app, so it’s literally all at their fingertips,” Yankoupe said. “We verify the guest’s identity during the signup process in a very low-impact way, and the rental experience itself is incredibly intuitive.”

Users can book a nearby Getaround vehicle instantly and unlock the vehicle with their phone — no need to meet the host to pick up the keys.

“Get the perfect car, truck, or van for your errands, vacation, commute, or road trip,” according to the company. “Rent cars on demand by the hour or day from convenient pickup locations in your area.”

Getaround guests can avoid auto loan debt by using the service, but Getaround vehicle hosts can also earn extra money that can go toward paying down debt by renting their vehicles out.

“We look at our hosts really in two categories,” Yankoupe said. “One is the individual car hosts who have a car sitting in the garage 22 hours a day — and maybe even two cars in the household that aren’t being used.”

She said these hosts can generate revenue to offset the cost of owning and maintaining the vehicle.

“The other type of hosts are what we call power hosts. These are owners of two or more vehicles. In some cases, power hosts have hundreds of vehicles listed on the platform,” Yankoupe said. “Our fleet managers work with those hosts, and even the individual hosts, to make sure that the right vehicle is in the right market to meet the needs of guests.”

For example, someone who needs a vehicle to run some errands around town doesn’t need a Porsche 911, she said. And it’s much more efficient to utilize a Toyota Camry versus a luxury sports car.

“And the hosts have control over when their vehicle is made available,” Yankoupe explained. “So, for instance, if they want to block from time X to time Y every day, they can do that. If they want to make it unavailable, they can easily do that.”

“Ready to make money? Submit your info and our onboarding team will follow up to help set up your Getaround Connect® device installation and Getaround® car profile,” according to the company. “We’ll install your Connect® device, which enables guests to access your vehicle. It also provides enhanced security for your ride so you can car-share with confidence.”

Insurance and Guidelines to Protect Hosts and Guests

Many consumers today are familiar with the processes and potential risks associated with taking a cab or using a ridesharing service. But, understandably, some people may have questions about protecting themselves or their vehicle under this relatively new car-sharing model.

“Our number one priority is the safety of our users. That’s why we screen and verify every Getaround driver to ensure safe and responsible participation in our car-sharing platform,” according to Getaround. “We also ensure that all vehicles are road-ready and well maintained by conducting thorough safety inspections during the vehicle onboarding process.”

Yankoupe said both the guests and hosts are protected under Getaround’s insurance policy.

“Getaround® guests and vehicles are automatically covered by our insurance policy during every trip. Our insurance policy includes comprehensive, collision, and liability coverage (with uninsured motorist protection) up to $1,000,000,” according to the company.

The company also maintains certain standards for the vehicles on the platform.

“Vehicles on Getaround® must be model year 2008 or newer, have less than 125,000 miles, seat no more than eight passengers, have at least four wheels, and pass a safety inspection during the onboarding process,” according to the company.

Drivers are vetted as well, and Getaround is integrated with DMVs in each state.

“Drivers must be at least 19 years old to drive with Getaround®, and possess a license for a minimum of two years (drivers under 21 must have a clean driving record),” according to the website. “Drivers with more than two minor violations or at-fault accidents in the past three years, or a DUI/drug-related incident in the past seven years are not eligible to drive with Getaround®”

Yankoupe said Getaround stands behind its mission and its promise to support hosts and guests as conveniently and efficiently as possible.

“I was impressed with and continue to be impressed by the mission and vision of this organization,” she said. “Our vision is ‘to make our cities and communities better places to live by building the world’s best car sharing marketplace.’ This truly drives the organization and influences the culture. And our mission is to conveniently connect guests to safe, affordable vehicles that they use to live their lives.”

700Credit: Credit and Compliance Tools for the Auto Industry