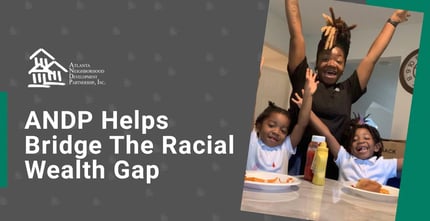 In a Nutshell: ANDP prides itself on providing low- and moderate-income families with housing options and advocating for affordable housing policies. The organization seeks to narrow the wealth gap between black and white households by promoting homeownership to the communities with less access. The ANDP Loan Fund also equips developers with the financial resources to further aid disadvantaged neighborhoods.

Low- and moderate-income households have fallen victim to several negative housing factors over the years, including gentrification and foreclosures. Many of these homeowners took the brunt of the housing crisis in 2008. The demographic make-up of these communities also further exposes the racial disparities that lie between black and white families.

According to a study done by the Federal Reserve, Black and Hispanic families saw larger declines in wealth following the Great Recession than did white families. Studies also show that the 27-point gap between Black and white homeownership has increased to 30 points from 1960 to 2017.

“We can’t sit idly by while the wealth gap grows between Black and white families. The homeownership gap today is as large as it was when housing legislation was passed in 1968, the Fair Housing Act in 1968,” said George S. Burgan, ANDP Senior Director of Communications & Technology.

In 1991, Hattie B. Dorsey founded Atlanta Neighborhood Development Partnership, Inc. to create more housing opportunities for the city of Atlanta. Its operations later grew beyond the city limits to answer the growing need.

The community development model in the West influenced Dorsey to address the diminishing supply of affordable housing in Atlanta neighborhoods. But ANDP’s mission didn’t stop there.

“We have always been a developer of affordable housing, but we have also been advocates. So, we do a little bit of policy advocacy,” said Burgan. “We also have a loan fund for other developers. We always try to play a lot of different roles in terms of promoting access to affordable housing.”

The organization seeks to meet the housing needs of people with less financial access while supporting the ones behind the development. ANDP also engages in community preservation by restoring single-family and multifamily homes and promoting housing policies that maintain affordability in those neighborhoods.

When the Great Recession hit, the real estate market bubble was one of the first to burst. The aftermath caused a housing downturn like never before. Homeowners now had mortgages worth higher than the value of their homes. As foreclosures increased, the vacancies made ordinary neighborhoods a breeding ground for criminal activities, like arson and theft. The crime caused property value to decrease in those affected areas.

“By 2008, our board of directors had approved the change in all of our program focuses to focus solely on the housing crisis. The biggest issue we were facing was the number of foreclosures and the number of vacancies that they were creating. And Atlanta was ground zero for that,” said Burgan.

ANDP’s goal was to purchase those foreclosed properties, renovate them, and sell them to buyers with area median incomes (AMIs) below 120%. The organization had to shift most of its operations to help fight the housing crisis and offset the damage caused by foreclosures on low-income communities. ANDP used the government-regulated Neighborhood Stabilization Program to acquire homes and match buyers with down payment assistance.

The federal programs helped the organization fund its acquisition development through the 2000s. However, the funding began to dwindle in the next decade. Although ANDP already had a solid partnership model, it needed more access to capital. So the organization turned to new market tax credits to finance its projects, shifting away from federal loan programs to enterprise funding and lending.

ANDP’s mission is to develop, finance, and advocate for affordable housing at scale that promotes racial equity and healthy communities where families thrive. It sets out to stabilize communities through policy research and foreclosure rehabilitation, and prevent homeowners from being priced out in their neighborhoods.

“The data is out there that shows for low- and moderate-income families, the number one way to build generational wealth is homeownership. We also believe that it is one of the best defenses against gentrification,” said Burgan.

By targeting low-income neighborhoods, ANDP can help save properties from deterioration and put them back on the market at an affordable price. The organization seeks to lift property prices, held down since the housing crisis, to give buyers a chance to increase their equity. With well-valued homes, Black communities can use their homes as a financial investment that can benefit their families for years to come.

Burgan said that, when the market gets hot, housing values run up quickly, and residents’ wages usually can’t keep up with them. Many people are forced to leave their long-term communities. So ANDP works to provide residents seeking affordable housing with single-family and multifamily homes in their neighborhoods.

How Its ‘Closing The Gap’ Campaign Addresses Housing Need

In July 2020, ANDP launched its Closing The Gap campaign. The agenda is to build or preserve 2,000 affordable units by 2025 with a budget of $440 million funded by its partners. By the campaign’s end, ANDP hopes to add 750 single-family homes and 1,250 multifamily properties. Of the 750 single-family homes, 250 will be rental while 500 will be homeownership.

“In order to execute those 2,000 units, there is a price tag of about $440 million. We identified all but $18 million of that. So we’re in the midst of a philanthropic capital campaign to raise that, and we think we’re on pace to do well. We already have close to 700 of those units done in a little over a year.”

Burgan said that the campaign has already begun to make a dent in the housing need and has also raised awareness. ANDP conducted national calls and shared its partnership model with several organizations, including the National Housing Conference and Housing Partnership Network, among others. These advocacy calls will help spread the affordable housing model and challenge the wealth gap in more locations across the country.

ANDP targets its loan products to local developers with the drive to help low-income neighborhoods flourish. It refined its partnership model to create relationships with those passionate about providing single-family and multifamily homes to those in low- and moderate-income communities. Since its inception, the ANDP Loan Fund has handed out close to $40 million in loans and supported the development of 5,309 units. The projects are valued at nearly $315 million.

“For anybody developing multifamily, there isn’t a single source of capital. It’s a capital stack. Our committee who makes approvals vet them just like a bank would. We do our homework. And we may take a risk where another bank wouldn’t,” said Burgan.

ANDP continues to help fight racial disparity by investing in black-owned businesses. It has even expanded its reach to help with their projects outside of ANDP’s development properties.

The organization is willing to take on many different roles to push its mission in creating affordable housing and opening up financial opportunities for everyone.