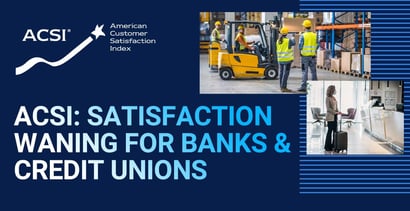 In a Nutshell: The American Customer Satisfaction Index (ACSI) found in its annual report on the finance and insurance sectors that satisfaction rates continue to decline for the second year in a row. Of course, a major contributing factor to this decline is the COVID-19 pandemic, which caused many businesses to pivot quickly to handle new ways of dealing with customers. But the ACSI holds that the decline follows a trend already seen prior to the pandemic. Credit unions also fell behind banks for the second year in a row due to several factors, including the pandemic, a shift to digital services, and ripple effects from the 2008 recession. Ultimately, the ACSI said it believes the pandemic will move the finance and other industries in a more digitally focused direction.

The American Customer Satisfaction Index (ACSI) measures the satisfaction rates of consumers across a wide number of industries. We’ve reported on the organization’s findings before as they relate to the finance industry.

Of course, customer satisfaction is an ongoing concern, and after the challenges presented to individuals and businesses in 2020, we wanted to check back in with ACSI to see how things were looking.

The short story is that customer satisfaction took a hit across many sectors as many businesses pivoted to new ways of operating while others struggled to stay open at all. Unfortunately, many didn’t survive the impact of the pandemic.

We reached out to David VanAmburg, Managing Director of the ACSI, to learn more about the recent report, explore the factors that contributed to the decline, and discuss what the future may hold.

First, a bit of background on the ACSI.

“The American Customer Satisfaction Index (ACSI) is the only national cross-industry measure of customer satisfaction in the United States,” according to the organization. “The Index measures the satisfaction of U.S. household consumers with the quality of products and services offered by both foreign and domestic firms with significant share in U.S. markets.”

ACSI’s research benefits businesses, researchers, policymakers, and consumers by serving as a national indicator of the health of the U.S. economy. It is also used as a tool to gauge competitiveness and predict future profitability.

“Americans find little to be pleased about when it comes to financial services, insurance, and health care as customer satisfaction falters across the entire gamut of measured industries this year,” according to the report.

VanAmburg said it’s not all doom and gloom, however. Satisfaction rates among banks still remain higher than pre-2015 levels.

“The general trend here is downward,” VanAmburg said of the recent report’s findings. “But it’s not really for the first time. We’ve seen banks rise pretty strongly in the middle of the decade, coming out of the subprime mortgage crisis and the Great Recession. They really stepped up their game and are now dipping back down a little bit.”

David VanAmburg is the Managing Director at ACSI.

The finance and insurance sectors were down a total of 2.3% from where they were one year ago, with an ACSI score of 76 on its 100-point scale.

The organization’s results come from surveys conducted between October 2019 and September 2020.

“Overlapping roughly half of the interview period, the COVID-19 pandemic upended business as usual for these sectors and accelerated the shift to online and mobile customer interfaces that was already underway, particularly among financial service providers,” states the report.

But the ACSI holds that the pandemic alone was not the only driver behind the wave of dissatisfaction. Rather, it amplified sentiments that were already present in the first portion of the survey period.

“For some industries such as banks, credit unions, and hospitals, the negative trend goes back further as satisfaction falls for the second straight year,” according to the report.

Within the world of financial institutions, credit unions have long held a reputation for their strong focus on customer service and prioritizing the satisfaction of their members. But the ACSI has seen customer satisfaction with credit unions lagging behind that of banks for the second consecutive year.

“The luster seems to have dissipated from credit unions pretty strongly in the last two or three years,” VanAmburg said. “Now they’re actually running just a touch behind banks in terms of overall satisfaction.”

The customer satisfaction rate among retail banks dropped 2.5% to 78, after seeing a slight decline the previous year as well. This is the first time bank satisfaction rates have dipped into the 70s since 2015.

“The startling pattern for 2020 is the relentless wave of dissatisfaction — across both bank categories and individual firms. All institutions, both large and small, show some erosion in customer satisfaction, making the decline an industrywide phenomenon,” according to the report.

“One year ago, credit unions fell behind banks for customer satisfaction for the first time in ACSI history,” according to the ACSI. “In 2020, banks still retain the advantage. Moreover, credit unions now sit at a historic low point for satisfaction, 10 points below their peak score of 87 in 2011.”

The other contributing factor is that satisfaction rates among credit unions increased as a result of the Great Recession when sentiment toward retail banks was low.

“There was a definite shift toward credit unions,” VanAmburg said. “A lot of people were fed up with banks with fallout from the crisis. They turned to credit unions for that smaller town feel, good customer service, and better rates — all the good things that credit unions have long touted themselves as being about.”

So, while credit unions now lag slightly behind banks, it may, in part, simply be a leveling off as the ripple effect of the 2008 recession fades away. VanAmburg said credit unions may also face challenges in keeping up with modern services offered by banks, due to the inherently smaller nature — and budgets — of credit unions.

How the Pandemic Pushed People to Digital Services

The ACSI report also addresses a side effect of the COVID-19 pandemic — a shift toward digital and mobile banking — and how it has been handled by institutions and consumers alike. With many banks and credit unions temporarily closing branches at the beginning of the pandemic, some customers were forced to engage in digital banking for the first time.

“While the bank industry has long been investing in digital and mobile technology, the COVID-19 pandemic prompted more customers to engage digitally with their bank,” according to the report. “In the third quarter of 2020, for example, Chase reported a 9% year-over-year growth in active mobile customers.”

The COVID-19 pandemic resulted in a shift toward digital services in the finance industry.

This shift toward digital services may indicate a long-term trend, but in the short-term it may also be a contributing factor for the slight decline in satisfaction. The less tech-savvy customers in the population were likely not pleased with the digital shift, although it has been a long time coming.

VanAmburg said the pandemic may have given certain industries the nudge they needed to operate more efficiently, and, ultimately, still provide quality customer service through more remote working opportunities and digital experiences.

“How many companies out there are figuring out, ‘We can save a bunch of money by continuing to do this? We’ve hit upon something, and it works. We can use Zoom, we can have meetings and be thousands of miles apart,” he said.

Ultimately, the pandemic will end up having long-term effects on the economy due to scenarios like this, VanAmburg said. He said that he doesn’t believe that every industry will boomerang back to operating how it did prepandemic.

“I think we’re just going to see some transformation of the economy to be even more digital than we’ve ever had before because we figured out how to do it, and it actually works pretty well,” he said.

What’s the Difference Between Credit Unions and Banks?