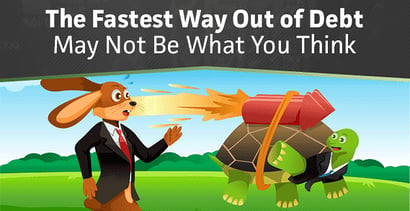 Doing just a little bit of research into the best and fastest ways to pay down your debt will return the same results from just about everyone: start with the highest interest rates, and pay your way down. Focusing on your highest interest rates will ensure you pay the least amount of interest over the life of your debts, and is generally considered to be the most logical method.

However, people are not always logical; and, as it turns out, the most logical plan isn’t always the best. According to a series of studies published in the Journal of Marketing Research, most people have a strong preference for paying off their debts by the size of the balance, rather than the size of the APR — and that preference may actually help them get out of debt faster.

The first study, titled “Winning the Battle but Losing the War: The Psychology of Debt Management” by Moty Amar, Dan Ariely, et al., was designed to analyze how consumers repay debt, and, specifically, the method with which they repay multiple debts.

According to the authors, “We propose that consumers saddled with multiple debts will primarily be motivated to reduce their total number of outstanding loans, rather than their total debt across loans, a phenomenon we refer to as ‘debt account aversion.’”

The initial phase of the study used a series of three field surveys, conducted online and through a CNBC poll, to gauge consumer debt habits. The first two surveys presented participants with hypothetical rebates, and asked them to apply them to several imaginary debts. The third survey asked participants about their actual debts and payment plans.

In the second phase of the study, researchers used a computer debt management game that simulated a realistic personal financial scenario, complete with income and debts, that lasted 25 “years” (or game rounds), with the player’s goal being to end the game with the lowest debt possible.

A study by David Gal and Blake McShane had participants play a computer simulation to analyze their debt management skills.

The results of both phases were consistent: “Participants deviated markedly from financial optimality, in a direction consistent with debt account aversion.” Translation? The average debtor prefers the hot satisfaction of closing accounts over the lukewarm joy of being logical.

In both the surveys and the game, participants showed strong preferences for paying down their balances in ascending order of size, starting with the smallest debt and working their way up — called the “snowball method.” This held true for most interest rate variations, except in cases where the rates were so high as to make paying one debt over the other prohibitive (such as with a payday loan).

Of course, just preferring the snowball method doesn’t make it better; if vegetables have taught us anything, it’s that you don’t always like what’s good for you. So, here’s another study for you: “Can Small Victories Help Win the War? Evidence from Consumer Debt Management” by David Gal and Blake McShane. They found that the reality is more complicated than anyone thinks.

“There are lots of ways you might think about trying to complete a task,” explains Blake, an assistant professor of marketing at the Kellogg School, adding that the approach may dictate success in more ways than one. “Various ways of doing these things might affect your [continued] motivation.”

In their study, David and Blake looked at over 5,900 real people — and their debt — to determine the role the fraction of accounts paid had in the overall success in completing a debt program. They wanted to see if successfully paying off a larger number of accounts, rather than a larger total debt balance, would increase the likelihood of overall success in debt repayment.

“There is this sort of tension: Do we snowball, or do we pay off large interest rates first?” said Blake. For instance, consider the following scenario: two debtors each carry a total balance of $10,000, spread across four accounts such that their balances are as follows:

Both debtors pay $3,000 toward their total debt, with the first person paying off the smallest of their debts — Debts 1 and 2 — while the second person pays off the single, but larger, Debt 3. The crux of the issue, according to Blake, is the difference between the two debtors. “Does that [first] person — who looks the same in every respect, except, they’ve paid off two of their four debts versus one of their four debts — are they more likely to successfully exit the program?”

So, what’s all this data mean for you? Well, if you’re one of the many people who the first study posits suffer from debt account aversion — it may mean you’re not quite as illogical as you thought.

“From a rational perspective, you should always pay the higher interest balances first,” said David, “and that’s what people have recommended in the past. But what we’re saying is, there’s another factor to consider.”

In the long run, eschewing larger, high-interest debts in favor of the quick gratification of closing an account may not be the most cost-saving decision (those interest fees can add up fast) but, the motivation boost from paying off an account can make a big difference when it comes to staying on track. It comes down to designing your debt repayment plan to best suit your personal priorities and circumstances.

According to Moty and Dan, “Becoming debt free is often a long and costly journey that might seem less daunting by focusing on closing individual debts.”

David and Blake agree. “A possible recommendation arising from our findings is that, when pursuing a long-term goal, people should focus on checking items off their list, rather than focus simply on making progress toward their goal in an absolute sense. Just having some small task to tackle early on might motivate you to get started.”

Study: Start Small to Get Out of Debt