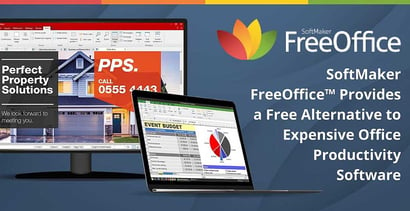 In a Nutshell: While the cost of a new computer may seem high, the real sticker shock often comes when you buy the software programs you need. The latest suite of office tools for documents, spreadsheets, and presentations can run as much as $400, or $50 a year for a cloud version. German developer SoftMaker’s FreeOffice is an alternative to the high-cost office productivity software. Users can download a free version for a variety of operating systems and create, open, and save documents and spreadsheets just as they would with more expensive programs — and in a layout that feels familiar.

About a year ago, I upgraded my laptop to a more powerful model with a faster processor, more memory, and a hard drive I’d be unlikely to fill up in a lifetime. It cost more than I’d expected, but I needed a capable, reliable tool for my work. Still, the cost of the computer was only the start of my expenses.

I’ve used a well-known office suite — with programs for documents, spreadsheets, and presentations — for decades, just like more than a billion people worldwide. It’s what I’m used to, and it’s always worked for me. But when it came time to buy the latest version for my new laptop, it shocked me how much it cost.

A full, professional version of the suite can run as much as $400, while a subscription version is an only slightly more manageable $50 a year. Still, that seemed high for a product that was first developed nearly three decades ago. I knew there were alternatives, but I assumed they wouldn’t perform as well, so, reluctantly, I purchased the high-priced product.

However, we recently had the opportunity to review an alternative to the more expensive office suites. It‘s called FreeOffice and is made by SoftMaker, a German software company that was founded in 1987. The company has been developing and perfecting office productivity software on par with the most popular offerings on the market ever since.

FreeOffice 2018 is SoftMaker’s most recent product and offers a version that’s free to download and use. It is also fully compatible with the file formats used by other developers, including Microsoft, so you can create, open, or save any file with FreeOffice. Much of the look and feel are similar to — or even an improvement upon — the office products we’re more accustomed to using.

We recently spoke with Jordan Popov, Sales Manager at SoftMaker, who provided some background on the company and its products.

“We’ve been around since 1987 and we offer the free version of our products to anyone, they just have to register it with us and we’ll send them an activation key,” Popov said.

That gives everyone — from students to entrepreneurs to established business owners — a cost-effective, high-quality option to accomplish their goals without draining their bank accounts.

SoftMaker also makes a commercial version of its office productivity software, called SoftMaker Office 2018. Functionality between the paid and free versions is nearly identical, with some slightly more robust features — including free customer phone support — in the paid version.

The cost of the commercial version is far less than what others charge for their office suites. SoftMaker Office Standard 2018 costs just $69.95, and Office Professional is just $99.95. Both versions are complete, not subscription based, and available for Windows, Mac, and Linux operating systems.

Whichever version they choose, users can create professional word documents, spreadsheets, and presentations in file formats compatible with other products, including Microsoft’s. TextMaker is similar to Microsoft Word and can open and save any document created in that program. The company’s full-featured spreadsheet program PlanMaker is similar to Excel, and Presentations,  which is comparable to PowerPoint, allows for a variety of design and presentation functions.

TextMaker is FreeOffice’s answer to document software including Microsoft Word.

In developing these alternatives, SoftMaker has created what it believes are improvements on the other versions on the market. The company doesn’t support macros in its FreeOffice suite as it feels these are a potential security concern.

“We feel this makes the users of our FreeOffice software safer. We also think our interface is a little easier to use,” Popov said.

One feature Popov refers to is the ability to toggle between ribbons and classic menus, and the toolbars interface. Either view is easy to switch to and allows for a more tailored experience. Anyone used to the Microsoft Office Suite of the past eight years is familiar with the ribbons interface, but there are still those who prefer a more basic layout.

One of the Best Reviewed Office Software Alternatives

One thing that’s clear about SoftMaker’s FreeOffice suite is that outside reviewers and tech blogs also seem to love it. Awards and accolades from independent sources include:

“One of the best productivity suites around. Highly, highly recommended.” — Tech Radar

“FreeOffice is an excellent and versatile Office alternative.” — PC World

Since its introduction, millions of consumers and businesses have downloaded SoftMaker’s FreeOffice suite. According to Popov, the highest concentration of downloads comes from Germany, the US, UK, Brazil, India, and Russia.

“Our newest version of FreeOffice for 2018 has been really well-received — especially when we look at the download rates worldwide,” Popov said.

SoftMaker’s FreeOffice suite has earned high marks for its functionality from many trusted media outlets.

And with SoftMaker’s long history of developing robust and well-supported products, users know they can trust the company to deliver what it promises — including email.

If you’re wondering about the company’s answer to Microsoft’s Outlook, SoftMaker integrated an enhanced version of Thunderbird — the open-source, cross-platform email client from Mozilla.

“We decided to use Thunderbird, with some additional features we developed and modified to fit our own look and feel,” said Popov. “We’ve also added some features like shortcut keys that Thunderbird doesn’t come with.”

Small businesses around the world trying to spur early growth turn to SoftMaker to attain razor-thin profit margins. But they stay with SoftMaker because of its commitment to quality and responsive support.

One significant area of concern for users of alternative software is the level of product support they can expect. For those who choose the commercial version of SoftMaker Office, free customer support is available via email. Users can enter a description of their question or problem, along with screenshots of the issues they encounter, and can expect a prompt response.

For FreeOffice users, SoftMaker provides an in-depth knowledge base through its support forum, a monthly newsletter, tips and tricks section, and the automated feedback mechanism on the website.

“We have a forum where people can log in to report a problem or see what others have reported,” said Popov. “We also have a robust support team that’s available for the paid version. However, problems or requests for features on the paid version flow to the free version as we do updates.”

“We take feedback as the basis to improve our features. Our product managers and support team are always looking at the feedback and working with the development team to prioritize changes and fixes.” — Jordan Popov, Sales Manager at SoftMaker

Popov touted the internal support structure and the dedication of the development teams responsible for support and updates to the various products.

“We take feedback as the basis to improve our features. Our product managers and support team are always looking at the feedback and working with the development team to prioritize changes and fixes,” he said.

In this way, the updates and enhancements to products take a short time to make it to even the free versions of the company’s flagship product line.

SoftMaker’s FreeOffice productivity software is a robust alternative to Microsoft’s Office Suite that’s easy to use, highly reviewed, and includes in-depth documentation. But, best of all, it’s free.