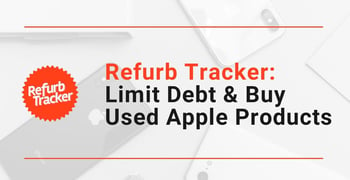 In a Nutshell: Apple computers and other Apple electronic devices have a reputation for quality, and with good reason. They also have a reputation for carrying a hefty price tag. For consumers looking to limit debt and still snag a great product, Refurb Tracker may just be the answer. The convenient, free service sends users alerts to let them know when the Apple product they are interested in appears in stock in Apple’s Certified Refurbished online store. Since launching in 2007, Refurb Tracker has helped more than 75,000 users in 25 countries obtain the refurbished product they were in the market for.

After I got my first iMac in 2008, I didn’t want to go back to Windows. I had filled up an iPod or two with music by that point, but I didn’t have much experience using Apple computers.

The intuitive design and user experience were like nothing I had ever used before, and I became an Apple fan. I’ll admit that PCs have come a long way in recent years and now rival Apple’s convenience and functionality. But there’s still nothing quite like working on an iMac or MacBook.

But they are expensive compared to other similar products — there’s no getting around it.

Millions of people in the U.S. are struggling with debt, and thanks to the COVID-19 pandemic, some folks have more debt than ever. In fact, even before the pandemic began, more than 40% of U.S. residents could not pay an unexpected expense of $400 without going further into debt.

But whether you’re a student or a mid-career professional, having access to a reliable computer is almost essential in today’s world. And, in certain industries where Apple software is the dominant program, Apple computers are virtually required to remain competitive.

If you’re in the market for Apple products but don’t want to have to go into debt for your next computer, Refurb Tracker is a service that helps you identify just the right product at the right price.

We recently chatted with Refurb Tracker’s Founder, Damien Debin, about how he came up with the idea for the service, how it works, and what users are saying about it.

Whether you’re looking to avoid debt or simply don’t see the value in paying full price when you can find a quality used product, read on to learn more about Refurb Tracker.

A Service Born Out of Necessity

As with so many valuable inventions over the years, Refurb Tracker was created out of a genuine need for a service that didn’t yet exist.

“In 2007, getting bored of Windows laptops looking all the same, I decided to dive into the Apple world when they transitioned to MacIntel,” Debin said. “As always, I tried to find the best deal on the internet before rushing into an Apple Store, but I found none — I couldn’t find any discount.”

Damien Debin is the Founder of Refurb Tracker.

Debin said prices for Apple products were the same in all the stores, as is the case with many luxury items. But during his search, Debin eventually discovered Apple’s Certified Refurbished products for sale on the company’s website.

“Every Apple Certified Refurbished product completes a rigorous refurbishment process that includes full testing that meets the same functional standards as new Apple products,” according to the Apple website.

Once Debin discovered this portal, he began his search in earnest.

“I discovered the Apple refurb store a bit by chance and understood that refurbished products were put online in waves,” he said. “I waited weeks for the right MacBook Pro, frantically refreshing the site, and I missed a few, not being fast enough.”

Debin, feeling deflated but not defeated, said he opted to use his tech background to create a solution to the problem he was experiencing.

“I decided to create an alert system to be notified when a new batch of MacBook Pros appeared,” he said. “Thinking that it could be useful to others, I made the tool available online.”

By creating Refurb Tracker, Debin made it easier for nearly anyone to find just the right Apple product in good-as-new condition.

“You will receive a ‘like new’ device with genuine Apple replacement parts (as needed) that has been thoroughly cleaned and inspected,” according to Apple. “Refurbished iOS devices will come with a new battery and outer shell. Every device will come with all accessories, cables, and operating systems. All Apple Certified Refurbished products are packaged in a brand new white box and will be sent to you with free shipping and returns.”

Debin discussed the functionality and the simplicity of Refurb Tracker.

“This platform is quite simple and allows you to configure alerts for you to be notified when new products appear,” he said. “In the beginning, the alerts were in the form of RSS feeds but people now prefer to have alerts by email, it is the simplest.”

Debin said that while the user interface is very basic, he is particularly proud of the statistics section of the website.

“It allows you to see for each product, the evolution of the price, the last restocking date, and at what time the product or products are generally put online for sale in the refurb store,” he said.

Refurbished products are the only way to buy a cheaper Apple product while still having the same warranty and quality as a new one, Debin explained.

“The product is exactly the same, only the cardboard packaging is a little different,” he said.

The challenge is that the supply is seemingly random.

“Weeks can go by without the product you want to show. And all of a sudden, a batch of 30 appears,” Debin said. “Hence the importance of being alerted upon arrival and then not wasting time.”

Debin vouches for the quality of refurbished Apple products from his own personal experience with them over the years.

“People can save 15% for a very recent product, up to 30% for a product that is one or two years old,” he said. “Unless you are in a hurry or want a custom configuration, there is no reason not to take advantage of Apple Refurbished products.”

Debin said that sometimes when users purchase a refurbished Apple product, they may be surprised and receive a product with better specs than they anticipated, such as a faster processor or more memory.

Customers Around the World Have Benefited from the Convenient Platform

Since launching Refurb Tracker in 2007, Debin said more than 75,000 users have benefited from the service.

Debin said that while much of the appeal of the Refurb Tracker website is its simplicity, he listens to user feedback and works to add new features for users whenever it makes sense to do so.

“Regarding new features, for example, I just added the possibility of modifying an alert once set up to adjust the filters,” he said. “And I plan to translate it to other languages, a lot of people in Japan are using this service lately.”

The user reviews and feedback are evidence that Refurb Tracker is a valuable service to many and that it does just what it says it will — help users take advantage of a good deal on quality refurbished products.

“I was attempting to jump on a refurbed iMac 27” from the Canadian online store. They were selling out within minutes of appearing (which explained why I could never find them.) I subscribed on Monday: found out how fast they sold out (I missed the units on Monday.) and when I got a notice on Tuesday, I jumped fast and got almost the exact unit I wanted. Thank you.” — Refurb Tracker user

Other users have had similar positive experiences.

“Hey — after being really disappointed about missing a MacBook Pro I wanted, I discovered your service,” wrote another user. “In less than a week, the same machine popped up (Yay!). I nabbed it, and it was out of stock right after that. Terrific service — and much appreciated. Great service. Helped me get the exact MacBook Pro I was looking for within minutes of its release!”

A number of tech and mainstream journalism outlets have also recommended Refurb Tracker for its quick and easy approach to nabbing a great deal.

And if consumers are still unsure if buying refurbished Apple products is the way to go, Apple guarantees its refurb products for at least one year.

“We back this quality commitment by including our standard one-year limited warranty with every Apple Certified Refurbished product,” according to Apple. “You also have the option of getting additional coverage by purchasing AppleCare products.”