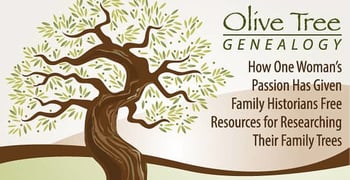 In a Nutshell: While there’s been a boon of genealogy websites with people increasingly digging into their ancestral roots, one site, Olive Tree Genealogy, was ahead of the curve. Founded 23 years ago by genealogist, Lorine McGinnis Schulze, the website is uniquely resource-rich, with items that include reconstructed passenger lists from ships such as the Mayflower. Unlike other costly genealogy sites, access to these resources is free, which is why we’ve chosen to recognize Olive Tree Genealogy with our Editor’s Choice™ Award as a recommended site.

Part of family lore in Lorine McGinnis Schulze’s family was that a relative was a tightrope walker who fell to his death over Niagara Falls.

As an adult, McGinnis Schulze discovered this was true: Her great-grandfather’s cousin, Stephen Peer, had been a Niagara Falls tightrope walker — the only one to fall to his death from the wire in 1887, according to newspaper accounts that were preserved at the Niagara Falls Public Library.

As it turns out, a daredevil streak seems to run in her family. McGinnis Schulze also found out that her great-grandfather’s brother, Harmon Peer, was the first base jumper in North America.

With such an interesting family background, it’s not surprising that McGinnis Schulze’s interest in genealogy began early in life. Since age 14, when her father died, she’s been a hobbyist genealogist. Later, after her husband died and McGinnis Schulze had an injury that kept her from full-time work, she again turned to genealogy; this time, professionalizing her childhood passion.

Around the dawn of the Internet, McGinnis Schulze decided to develop her own website to inspire people to do their own genealogical research. And so, in 1996, Olive Tree Genealogy was born. The website, now in its 23rd year, has over 1,900 pages of information.

“It’s become very eclectic,” she said. “We were really a trailblazer for online ancestry research.”

The website was and remains a free service, unlike other ancestry websites that have emerged in the time since — many of which charge monthly membership fees. Because of its vast set of free resources, we’ve decided to recognize Olive Tree Genealogy with our Editor’s Choice™ Award. We recently spoke with McGinnis Schulze about her website, as well as her lifelong passion for genealogy.

Reconstructing the Family Tree for Free

Olive Tree Genealogy has plenty of exclusive information, and many of its projects are the fruit of McGinnis Schulze’s own research and pet projects. One such item is a passenger list from a ship in the 1600s, the item that led her to start the website. She started a project to reconstruct other ships’ lists from the 1600s, based on information from other sources.

Her research process pulls from a variety of such original sources. For example, finding an ancestor who was a Palatine would lead her to do research on Palatines that might help other people interested in their ancestry.

“I was doing all this research and putting it online so other people wouldn’t have to,” McGinnis Schulze said.

Her resources are unique, and her approach is based on story gathering. For example, she has a project that pulls from poor law unions from England that sent people to the US and Canada. The site also has the passenger list from the historic Mayflower voyage.

The impetus for a storytelling approach comes from her personal interest in her own ancestors.

“I think for me, it’s twofold: I love history, and always have ever since I was a kid,” McGinnis Schulze said. “Also, I feel a real connection to my ancestors, so it’s important for me to put my ancestors in a historical time and know who they were — not just a name and a date. I want the stories behind them: what they did for a living; were they ever in trouble?”

In addition to the two aforementioned daredevils, McGinnis Schulze discovered that one of her relatives had been a Loyalist from New York, who changed his name; other family members were descendants of the Mohawk tribe.

McGinnis Schulze told us the site is targeted at more experienced hobbyist and professional genealogists, but beginners can find their way through the site’s resources.

“A few years ago, I set up a beginners’ section,” she added. “It gets people started and tells them some basics. There are links to simpler databases online.”

More experienced genealogists can jump right into the various subject areas on the website, some of which include immigration (ships’ passenger and naturalization lists), orphan records, insane asylums, Mennonites, Quakers, and almshouses.

One recent project is a site called Lost Faces, a collection of photo albums from the Civil War period.

“I started buying and rescuing photo albums from the Civil War period,” McGinnis Schulze said. “Most albums have 50 pictures. My dream was to put them online — all for free, for people — so that maybe someone can find a picture of an ancestor. I’ve got 81 photo albums, and 42 are up right now.”

Tips for Beginners: Go Slow, Talk to Your Family, and Document Everything

Piecing together your entire family’s past may seem daunting, but McGinnis Schulze advises people interested in starting a family tree to begin slowly.

“Start with yourself, and talk to your parents, grandparents, aunts, and uncles,” she said. “Talk to family members. Don’t jump around all over the place. Write down what they tell you. Document everything.

“Ask to see original documents, and make note of every single thing. Once you’ve exhausted your relatives, then gather vital statistics, like marriage and census records. It’s a slow process.”

Genealogy research is generally becoming easier for beginners, she added, thanks to a host of websites dedicated to the cause.

“FamilySearch is digitizing all microfilms, and Ancestry is purchasing and making deals to purchase others,” she said. “A lot of archives are starting to digitize records. They are bringing genealogy online for people.”

McGinnis Schulze said she is continuing to add new things to her website, as well. Going forward, she plans to spend two-thirds of her time on Olive Tree Genealogy, and the rest on her books. She’s already written 32, many of them related to genealogy.

“I just kept persevering,” she said. “You need a support system to motivate you and keep you going.”