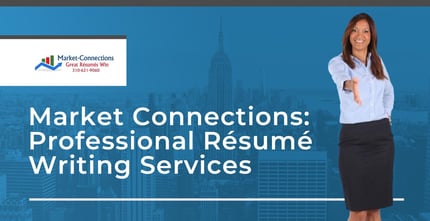 In a Nutshell: Like any professional document, résumés must follow specific rules and guidelines. But for the average job applicant, these requirements may not be apparent, or they may be difficult to implement. This may put job seekers at a disadvantage when seeking employment. Market Connections offers professional résumé writing for applicants who want to make a stellar first impression with hiring managers and recruiters. The process takes about two weeks to complete from initial consultation to finished product. In the end, job seekers will have a polished, pristine résumé that will help them stand out from the pool of applicants and land better, higher-paying positions.

One of the best moves a person can make when struggling with debt is to seek a higher-paying job, whether it’s in their current industry or a whole new area. But landing a new job is no simple feat. The search takes a lot of time, energy, and commitment — and that’s before you even get to preparing and submitting your application.

But all that effort can be for naught if your résumé doesn’t catch the eye of a recruiter or hiring manager. And for those who aren’t skilled in writing or design, creating an appealing résumé can be an uphill battle no matter how much time and focus they commit to the task.

When in doubt — and especially when earnings and debt are on the line — hiring a professional résumé writer is never a bad idea. But some résumé services can charge hefty prices for unproven results. This can be risky, especially if it involves incurring more debt with no guarantee of a payoff.

Mandy Fard, CPRW, CMRW of Market Connections, is a résumé writer with the experience and testimonials to inspire confidence in her clients.

Fard worked as a recruiter for decades, helping job seekers with résumé writing and interviewing skills. At a certain point, other recruiters began asking her for help and advice with their own clients. Around 2009, when the market was flooded with job seekers and the need for employment agencies was decreasing, she decided to become a full-time freelance résumé writer.

Today, Fard offers her skill and expertise to job seekers around the world, from Los Angeles to Tokyo. By leveraging her professional experience and knowledge, she is able to help a wide range of job seekers present themselves in the best possible light so they can land better jobs, increase their earnings, invest in their future, and pay off cumbersome debt.

One of the most important aspects of an effective résumé is a clean presentation, both visually and in its language. The information must be well-organized and laid out in an aesthetically pleasing way. But the overall form must be supported by well-crafted, appropriate writing.

“Résumés are rigid documents,” Fard said. “They do have a lot of rules and regulations. You can’t use pronouns, you have to have enough white space, you have to say the most amount of content with the least amount of words.”

Mandy Fard is the Founder of Market Connections.

But concision must be balanced with detail. Your résumé must paint a clear, precise picture of your experience and capabilities. This will showcase the ways an applicant will be able to benefit a potential employer.

“There’s a huge difference between saying, ‘I like what I do, and I’m busy, and they like me,’ than to be able to quantify what you do,” Fard said. “When you listen to this person, you’re not only listening to what she’s done in the past, but you’re also figuring out her potential.”

But how this information is presented is just as important as the information itself. Certain industries use specific terms and jargon, and knowing which words to use is crucial to advancing your career in a specific direction.

Fard uses the verb “directing” as an example. An electrical engineer in the construction industry could say he or she directed a team of junior engineers, and a potential employer would understand that role. But in the film industry, “directing” has a completely different meaning, and so saying that an executive directed a team of junior producers would be unclear or unprofessional.

The points above may seem minor, especially understanding that recruiters and hiring managers spend only a moment or two looking over an individual résumé — not enough time to notice all these minor details.

That’s why a clean layout and design is important: It captures attention and motivates the reader to look at those details. The presentation of specific information must convey your skills and qualifications clearly and unambiguously if you have any hope of gaining further consideration from a potential employer.

A professionally written résumé can help job applicants stand out from the crowd.

For example, imagine you’ve made it to the interview stage, Fard said. When you go to the meeting, will you be wearing a nice suit made by a professional, or will you wear an ensemble that you stitched yourself at home? Unless you’re a professional tailor — or at least a highly-skilled hobbyist — the latter is not going to make a good impression, she said.

The same is true of your résumé.

A Streamlined Process from First Draft to Finished Product

The first step in getting a professional résumé from Market Connections is sending your current résumé to Fard.

If you don’t already have a résumé, she can still help you, of course; you’ll just need to fill out a form that will provide her with things like your name and work history, Fard said. This is the basic information you would provide on any résumé, but you don’t have to deal with the hassle of formatting and completely fleshing it out.

After that, Fard will get in touch.

“Then I will send you a quote. In that quote, I’ll give you information about the process as well, and you can review what you see,” Fard said. “And if you like the quote — if you’re willing to pay that; if that is in your budget — and if you’re aligned with the process that you see, then you process your payment online. And then we get on the phone, and we talk about what’s more substantial, which is the content of your résumé.”

Based on the information Fard gathers in this conversation, she will begin writing your résumé. Whether you sent her an existing one or filled out the online form is inconsequential. She begins work from the ground up.

“I rewrite it,” Fard said. “I don’t edit a résumé and say, oh, here, I made five little changes, and off on your way. It doesn’t work like that. I rewrite the résumé.”

After that, you’ll have a professional-looking, sterling résumé that you can confidently submit to potential employers knowing that you’re putting your best foot forward.

“We all live in a very digital culture and world at this point,” Fard said. “We have gone past the days of referrals and reference checks. Now we live in a world where people write reviews [on] every decent website you look at.”

From LinkedIn to Yelp and other online platforms, reviews of products and services abound in the digital age. As a result, the old requirement of including professional references on résumés has fallen by the wayside, according to Fard. If a hiring manager is interested in a candidate, they can simply look up reviews of their work online, at their own convenience.

“These reviews are interactive,” Fard said. “Let’s say you go to Yelp, and you read somebody’s review that they wrote about me. You can actually click on that person’s name and be connected to them. The opportunity and the possibility of doing it is right there, which means that we are past the time of asking any vendors for direct references”

This is also true of Fard’s own services. Fard hosts a variety of reviews and testimonials on her website culled from sources across the Web, all of which speak powerfully to the quality of her work. So whether you’re seeking a better job and higher pay so you can invest in your future or pay down existing debt, you can be sure your résumé and your career are in experienced and capable hands with Market Connections.