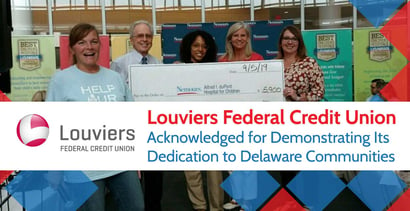 In a Nutshell: What is now Louviers Federal Credit Union in Delaware began life as a financial institution specifically for engineers who worked for DuPont. Over the years, the credit union has merged with other former DuPont credit unions as well as other organizations to serve almost 20,000 members. The credit union not only provides quality financial products and services to members, but it also demonstrates a high level of commitment to the community. Louviers Federal Credit Union leads several financial literacy initiatives for children, adults, and senior citizens. The financial institution is also active in supporting local causes and helps plan the finance-related portions of the annual #MILLSUMMIT. We are recognizing Louviers Federal Credit Union with our Editor’s Choice™ Award for Community Commitment for these efforts to support its New Castle County, Delaware, community.

Since 1968, Louviers Federal Credit Union has not only served folks in New Castle County, Delaware with its mission to meet the financial needs of individuals who meet its core common bond, but it has done its part to enhance the community as a whole.

The credit union was originally founded specifically for engineering employees of the DuPont chemical company, whose home base was in the county seat of Wilmington.

Shelley Ennis, Louviers Federal Credit Union’s Marketing Coordinator, explained how the financial institution went from serving a very specific group of people more than 50 years ago to its status today with almost 20,000 members and more than $270 million in assets.

“There was a time in Delaware that you couldn’t talk to somebody who didn’t have a family member who worked at DuPont — it was very prevalent,” Ennis said.

And each segment of the DuPont company had its own credit union, she said.

“Over time, pieces of the company have been sold off. And in 2017, DuPont merged with Dow Chemical,” Ennis said. “So, the individual DuPont credit unions kind of merged over time.”

“We remain a sound and well-managed institution dedicated to providing service to our membership through the people-helping-people philosophy of credit unions,” according to the credit union website. “We have a reputation for soundness and integrity and are one of the most respected not-for-profit financial institutions in the area.”

Louviers Federal Credit Union’s reputation is also bolstered by the work it does in its community, which includes educating residents of all ages about finance, supporting local causes, and providing high-quality services to its members.

We are recognizing Louviers Federal Credit Union with our Editor’s Choice™ Award for Community Commitment because of these initiatives and its long history of supporting the residents of New Castle County.

Many credit unions focus their financial literacy efforts on children and young adults — an honorable mission — but Louviers Federal Credit Union chose to expand its education efforts to reach people of all ages.

In fact, because of its wide-ranging financial literacy efforts, the credit union was named 2018 Financial Education Honoree by the Cooperative Credit Union Association.

“At Louviers, we saw a need to provide the same level of care and continued education to adults, seniors, and businesses as we do for kids,” according to a credit union announcement.

Shelley Ennis is the Marketing Coordinator for Louviers Federal Credit Union in Delaware.

Ennis said the recognition was due in part to Louviers Federal Credit Union’s assistance in funding a book through a partnership with the University of Delaware’s Center for Economic Education and Entrepreneurship on borrowing and saving.

“Written at a second-grade level, ‘How Daniel Got What He Wanted,’ has gotten fantastic feedback from schools set to receive it and the instructional package,” according to the credit union announcement.

Ennis said the only request Louviers Federal Credit Union made regarding the book’s storyline is that Daniel take his money to a credit union rather than a bank.

The credit union also partnered with the Newark Senior Center, which is geared toward an underserved population, to deliver a series of financial education workshops. The diverse topics were selected to appeal to those 40 years old and older.

“The idea was that it would help someone nearing retirement age start to plan and also educate someone already in or caring for someone in that phase of life,” according to the credit union.

Louviers Federal Credit Union also provides access to the CU Senior Safeguard program on its website, a result of a collaboration with the Cooperative Credit Union Association with other Delaware credit unions.

With millions of seniors falling victim to financial abuse or fraud each year, the credit unions decided to pull together and take action.

“They partnered with EverFi, a leading national technology company that specializes in online education to develop CU Senior Safeguard, an innovative and informative resource designed to help you protect the elders who rely on you most as a son or daughter, a caregiver, a grandchild, or a dear friend,” according to the organization website.

Sponsorships, the Annual Millennial Summit and Launching Another Education Series for Seniors

“We’re definitely big on supporting good causes when we can,” Ennis said. “Any type of marketing package that will also give something back to an organization or group in the community is something we can definitely get behind.”

“We wanted to show them that we’re here and we care about the important work they’re doing, that they’re dedicating their careers to,” Ennis said. “It was an easy cause to get behind.”

The credit union, along with several other local businesses, partnered to help kick off the Radiothon with the Nemours Concert for the Kids, featuring Hanson.

In the last two years, Louviers Federal Credit Union has been a part of #MILLSUMMIT in Wilmington, Ennis said, and actually helped plan the finance-related programming for the gathering aimed at millennials.

“#MILLSUMMIT is the region’s one of a kind event that gathers hundreds of professionals of all ages and backgrounds to Wilmington, Delaware, connecting professionals, difference makers, rising stars, and other leaders who want to make an impact in their community,” according to the summit website.

Ennis served as a moderator for one of the sessions at the 2019 #MILLSUMMIT and is also on the summit’s planning committee.

And based on the success of the senior center workshop, Ennis said the credit union is planning on launching another education series.

“That one got such great feedback,” she said. “We’re going to look into streaming the next one online as well, and then it can basically live on our website so people can go back and refer to it.”

Louviers Federal Credit Union makes sure it’s looking out for its own members as well via its products and services. One of these key services is Credit Sense, a free, comprehensive program designed to help members stay on top of their credit activity.

“You’ll get your credit score, an understanding of the key factors that impact it, and access to special loan and credit card offers that can help you reduce interest costs,” according to the credit union website. “With this program, you’ll always know where you stand with your credit and where you can potentially save money.”

Ennis said the service is similar to what other platforms such as Credit Karma offer, but with Credit Sense, Louviers Federal Credit Union members aren’t giving their sensitive information away to another company. They are able to stay with an organization they already know has their best interests at heart, and won’t sell their information to other entities.

“This program will also monitor your credit report on a daily basis to help you keep an eye out for identity theft,” according to the website. “You’ll be informed by email if any big changes are detected — a new account has been opened, a change in address or employment occurs, a delinquency has been reported, or an inquiry has been made.”

To sign up for Credit Sense, credit union members log in to their online banking account and click on the credit score dial on the right side of the screen, verify their Social Security number, and answer a few short questions.

“Once you have enrolled, you will also be able to access Credit Sense through our mobile app so you can check your score on the go!” according to the website.

With its level of community engagement, dedication, and support of worthy causes, New Castle County Delaware residents should feel confident knowing Louviers Federal Credit Union has their back.