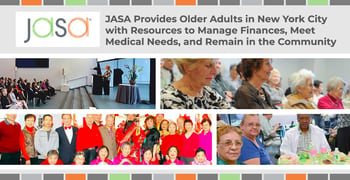 In a Nutshell: Elderly adults can face distinct challenges as they grow older and adjust to changes in their incomes and lifestyles. For seniors in New York City, the JASA is an agency that offers a support network and a wide range of services, including 22 senior centers, counseling services, meal delivery, elder abuse prevention, and much more. JASA also educates seniors about programs and resources available to help with financial planning and other benefits to ease the burden of a fixed income. The organization also helps prevent elder abuse through its team of experienced social workers and raising awareness within the community.

New Yorkers have a reputation for being a tenacious bunch. Some might even say stubborn. But those qualities are often necessary to live in the Big Apple. It’s a bustling metropolis in the truest sense, and the experience of living in New York is one only New Yorkers can understand.

That’s why it can be difficult for aging New Yorkers to face the possibility that they may have to give up their way of life as financial or physical hurdles make it harder for them to meet basic needs.

Recently, a woman in her mid-70s whose husband had passed away was looking at her remaining years with anxiety. She wanted to stay in her own home but was worried about how to make ends meet because she had very high prescription drug expenses and her rent frequently increased.

The woman was also afraid that if she reached out to someone for help, it may result in her being moved out of her apartment and into a senior living home.

Eventually, the woman did reach out to JASA for help in learning about what her options were for the future.

“She had no information on what resources were available to her,” said Danielle Palmisano, Senior Director, Intensive Services & Business Development at JASA. “A social worker met with her and provided her with a lot of information, offered her supportive counseling, and assisted her in applying for SCRIE (Senior Citizen Rent Increase Exemption), which froze her rent at the current rate.”

The JASA worker was also able to help the woman get on a plan that significantly reduced her month prescription drug costs, connected her to a local senior center for social activities, and helped her find a ride service for her transportation needs.

In the end, the woman was able to stay in her apartment, lower her monthly expenses, and gain access to helpful services she didn’t even know existed.

“That’s a pretty good example of the kind of work we do,” Palmisano said.

JASA was founded in 1968 with the mission to sustain and enrich the lives of aging adults in the Bronx, Brooklyn, Manhattan, and Queens, so they can “remain in the community with dignity and autonomy.”

The list of services JASA provides to the aging is extensive, to say the least. But Palmisano put the breadth of services in perspective by describing the list as a continuum of offerings that provide options for each phase of senior living.

“All of the programs are very well used,” Palmisano said. “It really depends on where the person is in their life. More active older adults may come to JASA interested in volunteer opportunities or taking yoga classes. The same person several years later might need surgery and reach out to JASA for financial guidance or to sign up for our meal delivery service.”

JASA even offers a crossword puzzle construction class where participants can learn from experts about crossword history, how to find a theme, creating a grid, and filling it in. At the end of the course, the puzzle is submitted to The New York Times, and the best ones will be published in the newspaper.

“People come to JASA who have worked their whole lives and are now struggling to understand how to maintain expenses,” Palmisano said. “They’re looking at the coming years not knowing how they’re going to fund them, which can be distressing.”

There are numerous public programs available to assist seniors, Palmisano said, but many older people either may not know about them or don’t feel comfortable applying to them.

JASA provides counselors who show seniors how to live on a fixed budget and educate them on benefits and other resources available.

Palmisano said that, other than general expenses such as rent, transportation, and food, unanticipated costs like medical expenses can be particularly difficult for seniors.

But Medicaid can be immensely beneficial for older adults who require home care services to remain in the community.

“It can be very difficult just trying to balance maintaining regular monthly expenses — which are ever-growing — while on a fixed income, then add medical expenses on top of that,” Palmisano said.

People may also be blindsided to learn that their insurance doesn’t cover a particular procedure or other costs they expected it to.

But Palmisano said these circumstances are exactly where JASA can be very valuable for seniors, many of whom are simply unaware of the many resources available to them.

“JASA social workers are trained and up-to-date regarding the many public programs available to assist seniors,” according to the JASA website. “After conducting individualized, comprehensive assessments to identify needs, our staff can help determine an individual’s eligibility for specific programs.”

The organization can also assist in securing benefits under programs, including food stamps, Medicare, Supplemental Security Income, and SCRIE.

Seniors are Common Targets for Scams and Exploitation

Palmisano recalled a case in which JASA received a phone call from a woman who was concerned about her neighbor — a woman in her late 80s with advanced dementia.

The elderly woman had been moved out of her upscale Manhattan apartment and into a nursing home. But after a period of time, the woman returned to her apartment, accompanied by a new, younger friend and caregiver the neighbor had never seen before.

“We reached out to the woman, and it turns out her new friend had been given power of attorney and was being very aggressive in blocking our efforts to reach her,” Palmisano said.

With multiple locations across New York City’s five boroughs, JASA is easily accessible for seniors in the metropolitan area.

Eventually, when a JASA social worker stopped by the apartment, the woman was alone and couldn’t navigate unlocking the door for the worker. The JASA worker called the police, who opened the door and found the woman was dehydrated, suffering from malnutrition and living in filthy conditions.

She was also a millionaire, and the new friend was someone out to exploit her dementia to gain access to her substantial wealth.

“She was taken to a hospital, and a guardian was appointed to her,” Palmisano said. “The district attorney became involved and access to her funds was blocked immediately. We were able to help her remain safe and helped to protect her funds.”

Palmisano said this was an extreme case, but unfortunately, elderly people are often the targets for criminals. JASA’s elder abuse prevention services are available to help remedy these situations or prevent them from occurring.

“Maybe somebody in the community has an elderly neighbor and they hear yelling coming from their apartment, or perhaps there’s an odor coming from the apartment,” she said. “They can reach out to JASA and we can investigate and offer assistance to the individual.”

JASA tries to educate seniors in the New York area about potential scams and how they can protect themselves against them whenever possible. The organization distributes email blasts, features guest speakers at senior citizens, and generally raises awareness within the community through outreach programs and messaging.

JASA Welcomes Volunteers in a Variety of Roles

Palmisano said there are a wide variety of volunteer opportunities with JASA.

“It can be anything from offering telephone reassurance for isolated older adults in the community, helping with holiday events, to helping out at a senior center,” she said.

JASA also has volunteer opportunities in its offices.

“Also, if somebody has a specific skill they’d like to share, they can reach out to our staff to see about coming out to teach a class,” she said.