GreenPath Helps More Than 200,000 Americans Get Out of Debt and Achieve Financial Wellness Each Year 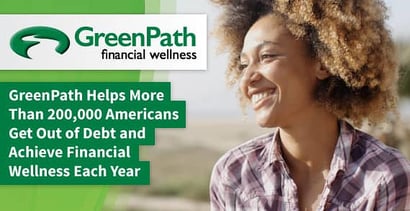 In a Nutshell: When you’re facing a serious illness, you don’t try to heal yourself — you seek professional help. For those dealing with high levels of unmanageable debt, professional help also exists in the form of numerous financial counseling organizations. Based out of Michigan, the nonprofit GreenPath Financial Wellness helps thousands of people resolve their financial problems every day and work toward their dreams. Debt and credit are part of our society, and,  in addition to providing financial literacy, GreenPath also treats the root cause with a wealth of financial education resources to help clients navigate the bumpy road to financial wellness.

Michigan-based teachers Dawn and David Van Dyke were in a vicious cycle with credit cards. Their spending habits spiraled out of control to the point where they relied exclusively on credit cards for purchases, and when they maxed out one card, they would use another one — or even open a new line of credit — to pay it off.

The couple eventually reached a breaking point. After accumulating nearly $50,000 in credit card debt, David and Dawn began arguing over which of their half-dozen credit cards to pay down each month. Finally, they decided to seek professional help and called a credit counseling organization — specifically, GreenPath Financial Wellness.

David described their experience on a testimonial on GreenPath’s website: “The day we walked into the GreenPath office, I was pretty uncomfortable, but they have this giant glass jar of cut-up credit cards, and I realized how great it would feel to not have credit card debt.”

They were so inspired by what they saw that they also began cutting up their own credit cards, putting the pieces in a giant glass jar. The couple devised an “austerity budget,” and committed to pay more than $850 monthly toward their debt.

Meanwhile, GreenPath was there for the Van Dykes every step of their climb out of debt. The nonprofit financial wellness and credit counseling organization, which is headquartered in Farmington Hills, Michigan, helped more than 200,000 people improve their financial health in 2016, said Stephanie Somerville, the Manager of Marketing and New Product Development at GreenPath. Also in 2016, it helped 49,596 households pay off more than $2 million in combined debt.

Sizeable Debt Can Happen to Almost Anyone

Over the past three decades, a growing number of Americans have fallen into debt, with 80% of households in some form of debt, with mortgages being the most common liability. Debt varies greatly depending on demographics, with Gen Xers having the highest percentage of indebtedness at 89%. More than half of retirees also report having debt.

Besides mortgages, some of the other main causes of debt problems include divorce, job loss, and new additions to the family, Stephanie said.

“The cost of living has continued to outpace income for years,” she said. “We know it’s difficult to sustain lifestyle with income wages. More than 44 million Americans have a side income or subscribe to the ‘gig’ economy. Debt is the result of personal circumstances — in other words, what’s happened in your life — and the general economic framework of our society.”

While GreenPath can’t change the societal framework in which people live, it can help them to overcome personal obstacles to financial wellness. Most people learn about its services through word of mouth.

Stephanie Somerville told us that while debt management is its most-used service, GreenPath is in a position to help throughout someone’s entire life.

“The biggest referral is friends and family,” Stephanie said. “When a client calls in, a client advocate team takes the call to assess the client’s current state. The team connects them with services to meet their needs, such as referring them to the right counselor.”

Some of the counseling is done online, but most is on the phone or face to face, and GreenPath has more than 60 offices in 17 states, Stephanie said.

“We position ourselves to be a guide for people’s entire financial life spectrum: millennials up through baby boomers,” she said.

Financial Literacy is the Key to Reaching Your Goals

GreenPath is more than the sum of its services and expertise. Its mission is to help people achieve their dreams, financial and otherwise, Stephanie said, noting that the two are often in tandem.

“We believe everyone deserves a chance to achieve their dreams,” she said. “Financial wellness is a key to that. We create people-centered solutions that support lifelong journeys. We look at a holistic approach. We want to be a guide for their entire financial life cycle.”

“We offer games, videos, and other tools to educate clients on financial wellness,” Stephanie said. For example, the GreenPath site hosts financial calculators, as well as a credit card debt calculator. A financial education library includes in-depth articles on topics, such as cost cutting, credit reports, and auto finance. The site also has a money blog and a monthly newsletter that offers personal finance advice, tips, and financial news updates.

The nonprofit goes a step further with a proper online curriculum it calls GreenPath University, which includes videos, e-courses, games, and webinars.

One thing GreenPath does not offer is legal services if someone decides that filing for a bankruptcy or a debt management plan (DMP) is the best course of action.

“People have to work directly with an attorney to file for bankruptcy,” she said, adding that GreenPath does provide comprehensive articles to help people understand the bankruptcy process and the various facets of bankruptcy.

Through hands-on consultation and educational resources, GreenPath has changed a lot of lives and has no shortage of success stories. The Van Dykes are just one example of a couple GreenPath helped emerge from nearly $50,000 of debt to achieve solvency.

“We pay cash for everything and check with each other if we want to use the debit card,” David said. “Debt addiction is like any other addiction. You have to decide you’re going to change.”

2018 is poised to be a year of growth for GreenPath. “As we continue to try to be available for people’s entire life cycles, there will be more to come around online communities and support networks,” Stephanie said. “We’ll be rolling out more to help people on their financial wellness journey.”

GreenPath will also be revamping its website and focusing on expanding its education department.

“We’re more interested in gamification and tools,” she said. “We’re also interested in automation and nudges.” What that means is more products resembling Fitbit, but for financial wellness.

Philosophically, too, GreenPath hopes to augment the role it’s been playing in people’s lives.

“We want to change the conversation, and make people realize, ‘You’re not alone; it’s not your fault; you’re going to be okay,’” Stephanie said. “We know there’s a far-reaching framework we’re all living in that’s contributing to people’s financial states.”